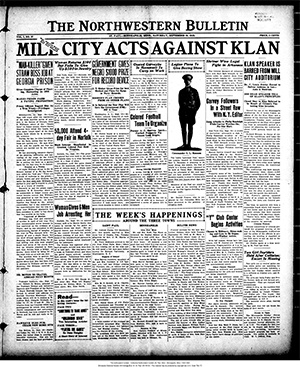 The Minnesota Historical Society (MNHS) recently received a $242,129 National Digital Newspaper Program grant from the National Endowment for the Humanities. With this two-year grant, staff will be able to digitize approximately 100,000 pages from the MNHS newspaper collection.

A program created by the Library of Congress and the National Endowment for the Humanities, the National Digital Newspaper Program (NDNP) is a long-term project to provide a free database of information and select digitized pages of newspapers from across the country on the website Chronicling America.

MNHS has been involved with the NDNP since 2007, and this funding has allowed staff to digitize approximately 525,000 pages from Minnesota newspapers over the last 12 years. The 2019-2021 grant will be MNHS’s sixth NDNP grant.

MNHS recently wrapped up another two-year NDNP grant, and pages from the following Minnesota newspapers will soon be available on the Chronicling America website:

In addition to adding select Minnesota newspapers to Chronicling America, MNHS also hosts its own extensive Minnesota Digital Newspaper Hub. Launched in 2013, the hub is a free, ever-growing resource with the goal to eventually have every Minnesota newspaper available online.

In August 2019, the Minnesota Digital Newspaper Hub surpassed the 3 million-page mark and features content from nearly 700 newspapers in all 87 Minnesota counties, dating back to 1849.

Digitization of the MNHS newspaper collection for online access is made possible by the Legacy Amendment's Arts and Cultural Heritage Fund through the vote of Minnesotans on Nov. 4, 2008.