Rare flags from the Civil War and the Spanish American War are undergoing treatment in the Minnesota Historical Society textile conservation lab. Each of the 58 flags is being documented, photographed, cleaned, stabilized and mounted onto a support panel. They are then placed in secure climate-controlled storage in a custom-designed case at the Minnesota History Center. The preserved flags will be displayed in the State Capitol on a rotating basis and available for examination by researchers at the History Center or online on the Society's web site. The first four flags will go on display April 9, 2011.

Sherelyn Ogden, head of conservation for the Society says, "in addition to slowing further deterioration of the flags, the conservation work will allow some of the more fragile flags to be available to researchers for the first time." 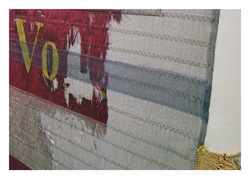 The flags were treated nearly 50 years ago by being placed between two layers of transparent silk crepeline that were sewn into place using a zigzag method of stitching (photo at right). Although this process saved the flags from disintegration, the stitching has since created weaknesses in the flags. Through this current conservation project, each flag is cleaned to remove airborne particulates, then using humidification it is flattened and realigned into its original shape. The flag is then laid out on a solid mount and painstakingly sewn in place with a curved beading needing and polyester thread the diameter of a human hair. Care is taken to insert and withdraw the needle through existing holes created by the previous conservation treatment. This process takes an average of 80 hours per flag to complete.

The Society has made available a podcast on the conservation process. 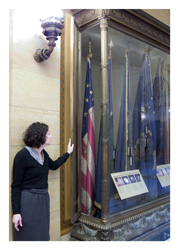 Four original Cass Gilbert-designed flag cases in the State Capitol (photo at right) have been retrofitted so one flag at a time can be displayed flat in its new mount. They have also been modified to keep out dirt and to maintain a set humidity level. Proper lighting that does not emit heat or ultraviolet radiation is being installed. Four flags will be on display at the State Capitol for approximately six-to-eight months at a time.

The appearance and condition of each flag is documented before and after treatment. Fabrication techniques, materials, damage and evidence of use are recorded. Digital photographs and color transparencies are taken of both the front and back of each flag. All of this information will be available on the Society's web site for research and study starting this spring. 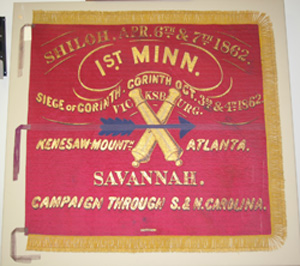 Of the 58 flags, 47 are from the Civil War. When the units were on the march, the flags were carried at the head of the columns and held in the center of the unit's line in combat. Losing a flag in battle was considered a disgrace and therefore it was highly protected. But the dangerous job of carrying the flag was one that soldiers vied for. At its core, the flags represent the honor of the units and the sacrifice and comradeship of the soldiers who marched under them. (Photo above: First Minnesota Light Artillery Flag.)

The Minnesota Historical Society was awarded a prestigious federal grant from Save America's Treasures through a partnership between the Institute of Museum and Library Services and the National Park Service, Department of the Interior. A match for the grant was provided by the Minnesota State legislature. A grant from the Tawani Foundation will also provide additional resources to continue conservation work. The Department of Military Affairs assisted by transferring custody of the flags to the Society.

The Minnesota Historical Society preserves and makes available a wide range of artifacts and materials chronicling Minnesota history. In addition to the flags, nearly 1,000 artifacts, ranging from diaries and letters to musical instruments, edged weaponry, photographs and state archives document Minnesota’s involvement in the Civil War.

The Minnesota Historical Society is a non-profit educational and cultural institution established in 1849. Its essence is to illuminate the past as a way to shed light on the future. The Society collects, preserves and tells the story of Minnesota’s past through museum exhibits, libraries and collections, historic sites, educational programs and book publishing.