The Grand Mound historic site has been a sacred place in Native American history for thousands of years. The site includes five earthwork burial mounds and a fishing village where people would gather to harvest spawning fish in the spring. Grand Mound is part of a network of 20 mounds, fishing sites and seasonal villages, stretching over 90 miles along the Rainy River in both Canada and the U.S. 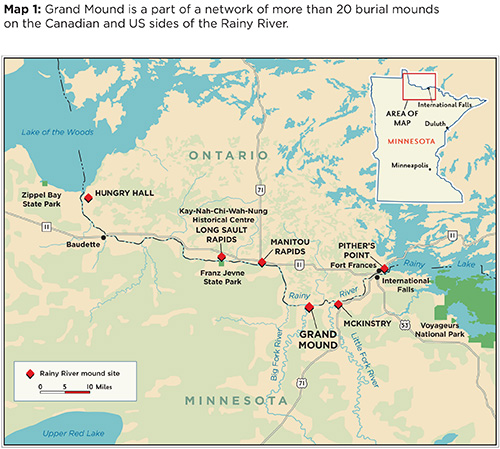 The site’s largest mound was built approximately 2,000 years ago to honor and bury the dead. It was added to over several centuries until about 600 years ago. Spanning 140 feet in length and 100 feet wide, it is the largest burial mound in Minnesota and the upper Midwest. With its 25-foot tall “body” and a “tail” stretching 200 feet, archaeologists have speculated it could be shaped like a serpent or a muskrat.

The location of Grand Mound is unique in that it was built on a floodplain, in a place that is still occasionally inundated. It is close to the water between the active river channels and a marshy abandoned channel of the Big Fork River. In contrast, most mounds were built on high elevations, overlooking lower areas. 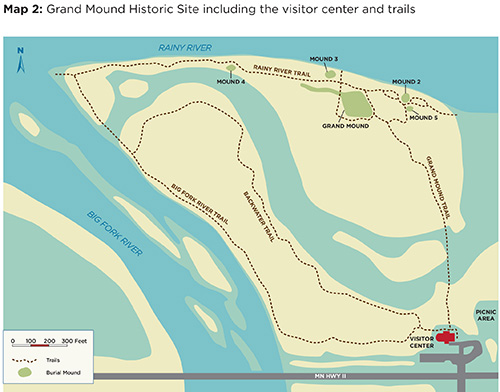 Grand Mound is the heart of an interconnected archaeological landscape built by the Laurel people, who lived in present-day northern Minnesota, Ontario along Lake Superior, and in portions of Manitoba and Saskatchewan. The Laurel people are part of the larger Middle Woodland cultural group, who resided in the area approximately 800-2,000 years ago.

Today research shows that the Laurel people’s descendants may be Algonquian-speaking people, including the Cree, Blackfeet and A’aninin (or Gros Ventre), who now live north and west of Minnesota. However, other groups also have ancestral ties to the site, including the Dakota—whose traditional stories tell of their interactions with Grand Mound—and the Ojibwe, who migrated to the area about 500 years ago.

Grand Mound is on land the Bois Forte Band of Ojibwe ceded in 1866 and is very close to where three treaty territories intersect. Many Ojibwe bands from across Minnesota and Canada would travel to the site annually during the spring sturgeon season. 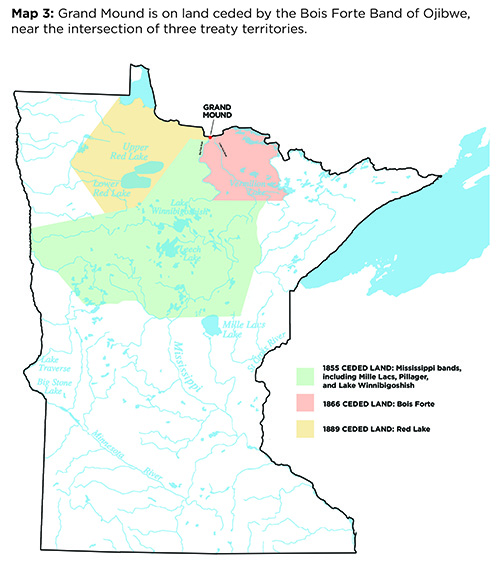 Europeans first arrived at the Rainy River about 300 years ago and started settling in the area in the mid-1850s. By the 19th century, antiquarians and looters began digging at Grand Mound and other area mounds, causing damage. The earliest archaeological excavations of the site began in the 1880s. The University of Minnesota conducted the first scientific excavation of the site in the 1930s, and archaeologists continued to study the site throughout the 20th century. Archaeologists estimate that between 2,000-5,000 individuals are buried at Grand Mound.

MNHS acquired Grand Mound and 60 surrounding acres in 1970 and began interpreting the site’s history for the public with a visitor center, exhibits and walking trails. The site was named to the National Register of Historic Places two years later. In 1975, a MNHS archaeological study determined that the site’s history spans 5,000 years.

MNHS closed the site to the public in 2002 due to budget cuts, but has continued to preserve and monitor the historic mounds. In 2011, the U.S. Secretary of the Interior named Grand Mound a National Historic Landmark, one of only 25 in Minnesota. This designation recognizes the importance of the site in North American archaeology, as well as the symbolic architecture of the Grand Mound itself.

Grand Mound is unique among the MNHS network of statewide historic sites because it contains thousands of human remains. As a result, since 2014, MNHS has conducted extensive community engagement around the historic site and its public use, most recently with Native people whom researchers believe are the direct descendants of those who built the mounds.