This summer staff at Historic Fort Snelling have kicked off an array of new and expanded programming, exploring 10,000 years of history at the confluence of the Minnesota and Mississippi rivers.

Recently, the legislature awarded MNHS $15 million, half of the $30 million needed to complete the full revitalization project planned for the site. This summer MNHS is moving forward with some program changes and will return to the legislature for the remaining support. Check out a press kit for more details on revamped programming in summer 2018.

On several Saturdays this summer, public special events will dive deeply into some of these lesser-known stories at Historic Fort Snelling, including Japanese-American and African-American history.

Media are invited to preview two of these unique opportunities in June and July. 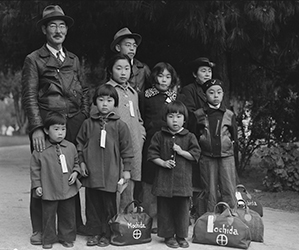 Friday, June 29, 10 a.m.-Noon: Media Preview of “Courage and Compassion: Our Shared Story of the Japanese American World War II Experience” Exhibit
Get an early glimpse of this national traveling exhibit from Go For Broke Education Center, opening June 30, including local content developed by the Twin Cities Japanese American Citizens League. Learn how Japanese-American soldiers trained at the Military Intelligence Service Language School (MISLS) at Fort Snelling during World War II, and how Minnesotans responded to their Japanese-American neighbors being put under house arrest after Pearl Harbor.

Two members of the local Japanese-American community will be available for interviews: Edwin "Bud" Nakasone, a WWII veteran who experienced the bombing of Pearl Harbor and trained at the MISLS; and Sally Sudo, who was imprisoned at Minidoka concentration camp in Idaho and moved to Minnesota after her brother’s time at the MISLS.

Plus, enjoy a media tour of new daily experiences at Historic Fort Snelling, including a recreated World War II-era classroom where MISLS students trained. Coffee, juice and pastries will be provided. 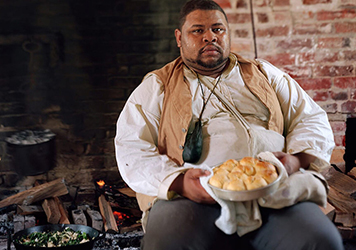 All day on Saturday, July 28, Twitty will conduct historic cooking demonstrations for the public in the commandant’s house kitchen, where many enslaved people worked prior to the Civil War.
​​​
See the full schedule of upcoming special Saturday events:

Details of some of these special events are still in the works. Check the MNHS web calendar for the latest updates.

About Historic Fort Snelling
Historic Fort Snelling, Minnesota’s first National Historic Landmark, resides on Dakota homeland known as Bdote. The restored 1820s fort and visitor center present the stories of those who crossed paths here—from the Dakota, Ojibwe and enslaved people, to fur traders, immigrants and soldiers. The site is located at state Highways 5 and 55 overlooking the Mississippi and Minnesota rivers. For more information, visit www.mnhs.org/fortsnelling.

The Minnesota Historical Society is a nonprofit educational and cultural institution established in 1849. MNHS collects, preserves and tells the story of Minnesota’s past through museum exhibits, libraries and collections, historic sites, educational programs and book publishing. Using the power of history to transform lives, MNHS preserves our past, shares our state’s stories and connects people with history.