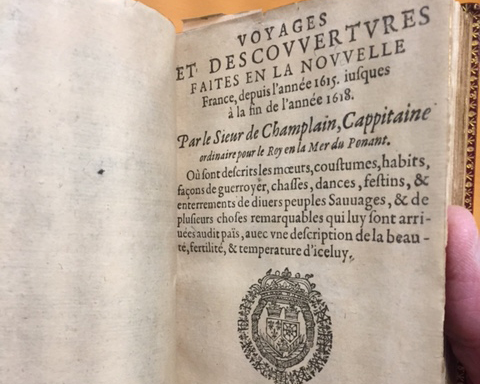 This book is a very rare first edition published in Paris in 1619. It describes in detail the geography of the eastern Great Lakes and includes an essay on the Huron people and their relationship with the French.

Champlain (1567-1635) was an explorer, cartographer, soldier and diplomat. He crossed the Atlantic more than 20 times to stake claims on behalf of the French and is known for establishing Quebec City. His travel narratives helped guide Father Hennepin, who would later explore what is now Minnesota.

While MNHS already has strong collections documenting Great Lakes, St. Lawrence River and Canadian history, as well as many books written by Father Hennepin from the 1680s, this new acquisition adds to a very small collection of works from such an early time period. It is also the only original Champain book held by MNHS. This book will help researchers contextualize Hennepin’s time in Minnesota and European exploration of the western Great Lakes.

The book was purchased in memory of longtime MNHS supporter and former board member Martha Kaemmer who passed away on March 29, 2018.