In the Minnesota Historical Society’s vast map collection, there are several that are key resources depicting the early history of Fort Snelling. An 1839 map created by surveyor Lt. J.L. Thompson is now newly accessible to researchers to explore in the Gale Family Library. 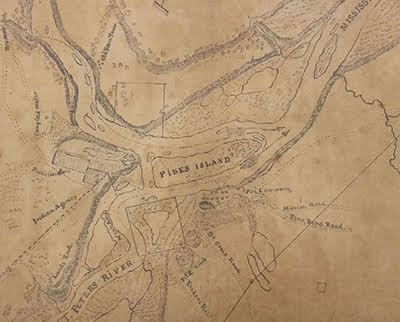 While the map was donated to MNHS several years ago, it has now been encapsulated (encased between protective layers of plastic) by conservators, making it safe for researchers to regularly handle.

The handwritten pen-and-ink map represents an important moment in the fort’s history. Previously the borders of the Fort Snelling military area were loosely defined, and in 1837, the U.S War Department instructed Maj. Joseph Plympton, commander of Fort Snelling, to formalize the borders.

Plympton ordered Lt. E.K. Smith to survey the area, and a March 1838 oilcloth map of a proposed military reservation was sent to Washington, D.C. Plympton also wrote to his superiors about his problems with civilian squatters, who were selling alcohol to the soldiers and depleting timber. Since the fort’s 1820s construction to protect U.S. interests in the fur trade, civilians were drawn to the area by the fort’s presence and formed a small community on government land nearby.

When the War Department ordered a new map with enough land to support the fort’s timber needs, Plympton saw an opportunity to expand military's holdings beyond Smith’s initial survey and rid himself of the squatters. When Lt. J.L. Thompson drew a new map in 1839, Fort Snelling’s boundaries expanded to claim areas as far as St. Anthony Falls and almost all of the lakes in what's now Minneapolis.

In May 1840, based on Thompson’s map, soldiers evicted all civilians living illegally on U.S. military land. Some of the squatters moved down the Mississippi River and created a community called Pig’s Eye, eventually renamed St. Paul.

The Thompson map is one of an estimated 50,000 maps in the MNHS collection, including several rare handwritten ones depicting Fort Snelling, like:

The Minnesota Historical Society is supported in part by its Premier Partner, Explore Minnesota Tourism.

Photo caption: Fort Snelling and its immediate surrounding area as depicted in an 1839 map created by J.L. Thompson.