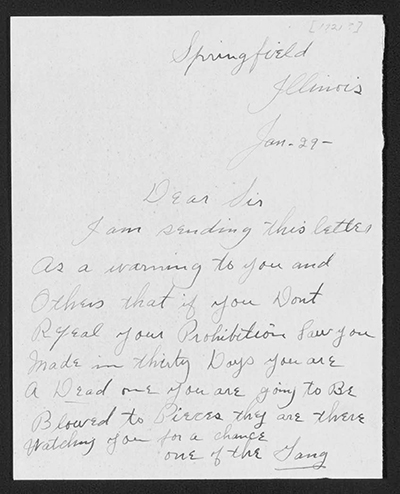 One hundred years ago today, the United States Congress passed the National Prohibition Act, which outlined how the country would enforce the 18th Amendment, prohibiting the sale and manufacture of intoxicating liquors. The new law was nicknamed the Volstead Act for Minnesota’s Andrew Volstead, who first introduced the bill and managed the legislation as chair of the House Judiciary Committee.

While Volstead’s papers have been part of the Minnesota Historical Society’s collections since 1947, they were recently digitized in time with Prohibition’s 100th anniversary. The collection spans from 1868 to the mid-20th century, but the majority of papers are from 1920-1922 when Volstead—a U.S. representative from Granite Falls from 1903-1923—was at the center of the country’s hotly contested debate over alcohol.

Highlights from the collection include:

The public can explore the entire Volstead collection online on the MNHS website.

Photo caption: An anonymous death threat letter to Volstead signed by "One of the Gang," ca. 1921