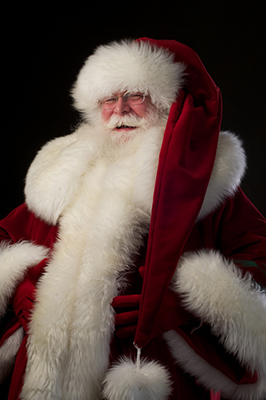 In 2017, longtime St. Paul resident Leo Treadway decided to hang up his Santa suit after 30 years of playing the beloved St. Nick around the Twin Cities. Recently, he offered his suit to the Minnesota Historical Society, and today it officially joined the MNHS collection—just in time for the holidays.

Known as Santa Leo, Treadway brought Christmas joy to children, families, community organizations, company parties and more throughout his Santa career. He also spent many years as the resident Santa for the annual Breakfast with Santa at the Highland Park Chatterbox Pub.

A member of Minnesota’s North Star Santas, a group of real-bearded Santas, Treadway was the organization’s only second-generation Santa. When he first started out, Treadway wore the suit his father used to play Santa in New Jersey in the 1970s. Over time, he acquired his own red velvet coat—which weighs a hefty 25 pounds—pants and hat, handmade by Lynn Farrington, longtime costume designer for Macalester College’s theater department.

“I was very insistent that all my costuming look like clothing which the character would actually wear… .and that it not look like a ‘costume,’” Treadway said.

In addition to this handmade suit, MNHS also acquired various Santa accessories and a less-formal Santa ensemble that Treadway added to his repertoire in the early 2000s. Styled after Finland’s Santa character Joulupukki, the outfit includes a shirt and vest with Finnish embroidery designs. It was created by Sarah Maas, a costume designer who works with Ingebretsen’s Nordic Marketplace in Minneapolis.

These costumes help fill a gap in the MNHS collection. “In our collection, Santa mostly appears on greeting cards, ornaments, holiday-themed marketing and in historic photographs,” said 3D curator Sondra Reierson. “Santa Leo's suit is the very first in the collection. It’s especially notable because it was designed and made locally and comes with such a compelling personal Minnesota story.”

Treadway’s costumes will be digitized and available to view on the MNHS Collections Online website in the future.