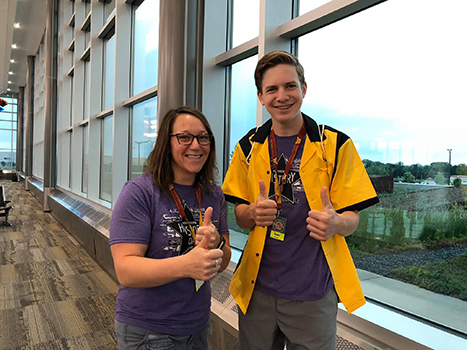 This institute brings student-teacher teams from Hawaii and American Samoa together with teams from the U.S. mainland for the distinctive opportunity to study, consider and reflect upon World War II in a way that few have done before. Over the next six months, students and teachers will read books and selected materials, engage in online discussions, and research a Silent Hero, a military service member who died in World War II and is buried or memorialized at the National Memorial Cemetery of the Pacific in Honolulu, Hawaii.

In June, the teams will meet in Oahu where they will walk in the footsteps of history, and learn firsthand about the impact of World War II in the Pacific. Travel and program expenses are provided for all participants. The experience will culminate with the completion and presentation of the teams’ Silent Hero eulogies and profiles, which will be featured on NHDSilentHeroes.org, as well as the websites of the sponsoring organizations.

“We are grateful to be working again with our friends and partners from the Pearl Harbor Historic Sites to offer this extraordinary opportunity,” said National History Day Executive Director Dr. Cathy Gorn. “The students and teachers selected for this year’s institute represent many different parts of the country. Through this invaluable academic experience, I hope participants gain a deep appreciation for those who served and sacrificed in the Pacific Theater of World War II, as well as a thorough understanding of the essential role Hawaii played in those operations.”

“This year, our nation will commemorate the 75th anniversary of the end of World War II. It is vitally important to provide opportunities for teachers and students to study the history of the war in the authentic settings provided in Hawaii,” said Dr. Shauna Tonkin, director of education and visitor experience at Pearl Harbor Aviation Museum. “The Pearl Harbor Historic Site partners are honored to be part of this unique program that creates personal connections to the past, and inspires teachers and students to keep the stories alive.”

About National History Day
NHD is a nonprofit organization based in College Park, Maryland, which seeks to improve the teaching and learning of history. The National History Day Contest was established in 1974 and currently engages more than half a million students every year in conducting original research on historical topics of interest. Students present their research as a documentary, exhibit, paper, performance or website.

Projects compete first at the local and affiliate levels, where the top entries are invited to the National Contest at the University of Maryland at College Park. NHD is sponsored in part by HISTORY®, the National Endowment for the Humanities, the National Park Service, Southwest Airlines, the Crown Family Foundation, The Better Angels Society and the Diana Davis Spencer Foundation. For more information, visit nhd.org.

About Pearl Harbor Aviation Museum
Pearl Harbor Aviation Museum is a 501(c)(3) nonprofit organization located on Historic Ford Island at the central site of the December 7, 1941, attack on Pearl Harbor. Its mission is to steward America’s first aviation battlefield of World War II, sharing the artifacts, personal stories, impact and response to the Pearl Harbor attack and the Pacific region battles that followed, honoring those who have defended our freedom to educate and inspire future generations. Visitors walk the Pearl Harbor flightline where the attack began, enter the bullet-scarred hangars, see the control tower and vintage aircraft and learn the stories of WWII heroes and events that changed our nation and the world.

About Pacific Historic Parks
Headquartered in Waipahu, HI, Pacific Historic Parks is the nonprofit cooperative association of the National Park Service and has been raising funds and providing support to NPS operations at Pearl Harbor since 1979, when the organization was known as the Arizona Memorial Museum Association. PHP’s mission is to “support the USS Arizona Memorial and other Pacific historic locations through education and interpretive programs, research, preservation and restoration, to perpetuate the memory of events and honor the people involved in these sites.” PHP also supports NPS operations at: Kalaupapa National Historical Park on Molokai; the War in the Pacific National Historical Park on Guam, and the American Memorial Park on Saipan in the Northern Mariana Islands. Since 2014, Pacific Historic Parks has also partnered with the state Department of Land and Natural Resources to support the Diamond Head State Monument. Visit pacifichistoricparks.org.

About the Pacific Fleet Submarine Memorial Association
The Pacific Fleet Submarine Memorial Association is a 501(c)(3) nonprofit corporation that was founded in 1978 with the purpose of acquiring the WWII fleet submarine USS Bowfin and placing her on permanent display at Pearl Harbor, Hawaii. USS Bowfin opened to the public in 1981, and last year welcomed her nine millionth visitor. With an average of 400,000 visitors per year, the USS Bowfin Submarine Museum & Park is the most visited historic submarine in the world and one of the few places that the public can learn about the history of our “Silent Service.” The submarine is open daily from 7 a.m. to 5 p.m. at 11 Arizona Memorial Drive at Pearl Harbor, except on Thanksgiving, Christmas and New Year’s Day. The adjacent submarine museum is presently closed for expansion and restoration. For more information, call (808) 423-1341, or visit bowfin.org.

Program support is also provided by the Legacy Amendment's Arts and Cultural Heritage Fund through the vote of Minnesotans on Nov. 4, 2008. For more information, visit education.mnhs.org/historyday.

The Minnesota Historical Society is supported in part by its Premier Partner: Explore Minnesota Tourism