The event will be broadcast live on Facebook from Split Rock Lighthouse on Nov. 10, 2020.

The annual Edmund Fitzgerald Memorial Beacon Lighting commemorates the sinking of the freighter Edmund Fitzgerald and the loss of her 29 crew members on Nov. 10, 1975. It is also a time to reflect on the memory of all lives lost in Great Lakes shipwrecks. 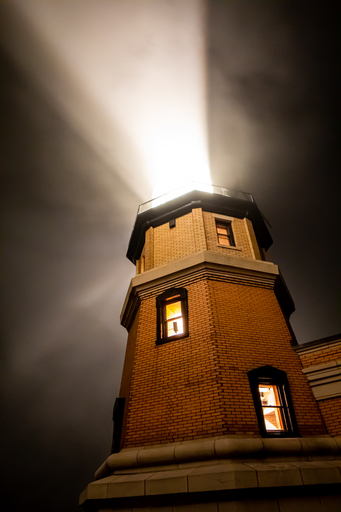 This year the ceremony will be held via social media platforms on Nov. 10, 2020, starting at 4:30 p.m. with the beacon lighting following the ceremony at around 4:45 p.m. The video stream of the beacon lighting will be provided by KBJR TV in Duluth and can be accessed live through the MNHS and Split Rock Lighthouse Facebook pages. It will also be available as a recording on Facebook and YouTube.

Split Rock Lighthouse is open 7 days a week, 10 a.m. to 6 p.m., through October 31, 2020. Interior spaces including the lighthouse and keeper’s residence are closed with access available to the grounds for spectacular views and limited access to the fog signal building and the visitor center. Guests can purchase a timed entry ticket for $8 online or onsite. For more information visit mnhs.org/splitrock.

Edmund Fitzgerald Background
The loss of the Edmund Fitzgerald and her crew members in 1975 shook the country. No freighter had been lost on Lake Superior since 1953, and the Fitzgerald was outfitted with an experienced crew and state-of-the-art technology. When it was launched in 1958 it was the largest ship on North America's Great Lakes.

The Fitzgerald began her final voyage on Nov. 9, 1975, with a cargo of taconite she was transporting from Superior, Wisconsin, to Great Lakes Steel near Detroit.

Due to a developing winter storm, the captains of the Fitzgerald and a nearby ship, the Arthur M. Anderson, stayed in close radio contact as they traveled, agreeing to take a more protected northerly route across Lake Superior.

By the afternoon of Nov. 10, winds had reached near hurricane strength. At 3:30 p.m. Captain Ernest McSorley reported that the ship had suffered damage to a fence rail and lost its radar. He asked the Anderson to guide them to Whitefish Bay, Michigan. At 7:10 p.m., McSorley radioed that “We are holding our own.” Five minutes later, the ship disappeared off the Anderson’s radar.

The Edmund Fitzgerald was found a few days later in two pieces beneath 530 feet of water about 17 miles from the entrance to Whitefish Bay. Though the ship went down in the storm, the details of why it sank are still largely debated today.

Explore more about this and other Great Lakes shipwrecks on the Split Rock Lighthouse website.