A mighty and fatal 1905 gale over western Lake Superior spurred the construction of Split Rock Lighthouse overlooking one of the world’s most dangerous stretches of water. On July 31, 1910, after five years of arduous labor constructing the edifice atop a 130-foot sheer rock cliff, the now world-famous North Shore landmark first sent its powerful beam out across the water.

The Minnesota Historical Society is getting ready to celebrate the centennial of Split Rock Lighthouse in 2010. Restored to its early-20th century splendor, it is one of America’s best-preserved lighthouses. Special activities and events will be offered throughout the year, along with the popular destination’s regular programming. More than 120,000 visitors a year tour the lighthouse and keeper’s home, climb the lighthouse tower to see the original, still operational French bivalve lens, and take their own shots of one of the most photographed sites in the country. "For many who visit Split Rock Lighthouse this is their first view of Lake Superior," says Lee Radzak, the historic site's manager and modern-day keeper. "Seeing the endless horizon from the top of the lighthouse and the great ships far out on the sparkling water, just as the early keepers saw them, is an experience many people never forget." 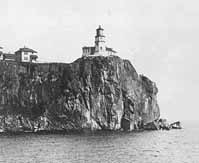 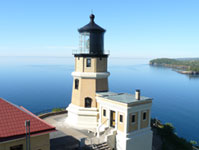 In the early years of the 20th century, iron ore shipments on Lake Superior boomed, as United States Steel’s bulk ore carriers became the largest freight-carrying fleet under one ownership in the world. The demand for a new lighthouse along the lake’s inhospitable North Shore grew as shipping increased.

Then, on Nov. 28, 1905, a single storm damaged 29 ships, many of them the uninsured property of U.S. Steel, the largest freight-carrying fleet in the Great Lakes. Two carriers foundered near a rocky stretch of coastline known aptly as "Stoney Point," overlooking what some called one of the most treacherous stretches of water in the world. Soon after, a delegation led by the steamship company president descended upon Washington, D.C., and in early 1907, Congress appropriated $75,000 for a lighthouse and fog signal on this point.

Surveyors and engineers immediately turned their attention to the challenging task of building a working lighthouse on the 130-foot sheer rock cliff, inaccessible by land, overlooking the dangerous waters. After the completion of a hoist and derrick system to lift equipment from boats below, work was begun and soon the outcropping was abuzz with up to 50 men working six days a week to complete the construction of the 54-foot tall lighthouse.

On July 31, 1910, lighthouse keeper Orren "Pete" Young climbed the spiral staircase and lit the incandescent oil vapor lamp that powered the seven-foot-across lens for the first time. Its powerful light beamed out across the water and provided a beacon to sailors for the next 60 years. (A 1,000-watt electric bulb replaced the kerosene lamp in 1940.)

Over the years, and especially after Highway 61 was completed in 1924, Split Rock Lighthouse became one of the most visited lighthouses in the country. First operated by the the U.S. Lighthouse Service, it was taken over by the U.S. Coast Guard in 1939 and was an active light station until it was decommissioned in 1969, its operation made obsolete by modern navigational equipment. The State of Minnesota obtained the scenic landmark in 1971 and in 1976, the 25-acre Split Rock Lighthouse Historic Site was transferred to the Minnesota Historical Society. It is one of the 26 historic sites and museums across the state administered by the Society.

The Minnesota Historical Society is a non-profit educational and cultural institution established in 1849 to preserve and share Minnesota history. The Society collects, preserves and tells the story of Minnesota’s past through museum exhibits, extensive libraries and collections, historic sites, educational programs and book publishing.