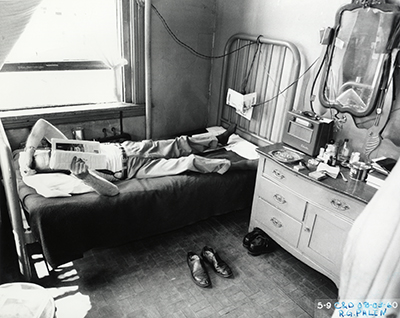 The new photography exhibit “Skid Row Minneapolis” captures the last years of downtown Minneapolis’ Gateway District, a gritty neighborhood of flophouses and bars, according to author James Eli Shiffer. Through photographs taken by the city of Minneapolis and John “Johnny Rex” Bacich—a bar, liquor store and hotel owner who documented his clientele in photos and film—visitors can glimpse this vanished “skid row,” razed for urban renewal by the early 1960s.

Mill City Museum will celebrate the exhibit’s opening with a public reception on April 7 from 6 to 8 pm. Shiffer will give an illustrated talk on Bacich and the Gateway District, and the event will include screenings of Bacich’s “skid row” home movies. A cash bar will be available.

"Skid Row Minneapolis" is located in the museum’s Mill Commons, and is free and open to the public during regular museum hours. It will be on view April 7 to July 4, 2016.

The exhibit is a companion to the book The King of Skid Row: John Bacich and the Twilight Years of Old Minneapolis by James Eli Shiffer (University of Minnesota Press, April 2016).

ABOUT MILL CITY MUSEUM
Built within the ruins of the Washburn A Mill, a National Historic Landmark, the award-winning Mill City Museum chronicles the flour milling industry that fueled the growth of Minneapolis. The story comes to life through the eight-story Flour Tower, Water Lab, Baking Lab and other hands-on exhibits.

The museum is located at 704 S. Second St. in Minneapolis. Hours are 10 am to 5 pm Tuesdays through Saturdays and noon to 5 pm Sundays. The site is also open Mondays 10 am to 5 pm in July and August. For more information, call 612-341-7555 or visit www.millcitymuseum.org.