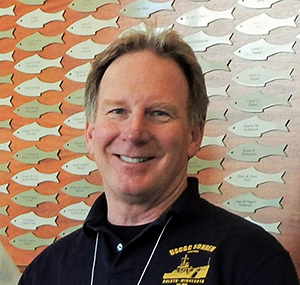 Called the Francis Ross Holland, Jr. Distinguished Service Award, it is bestowed “with respect and admiration for contributions to the history and preservation of America’s lighthouses.”

The organization announced the award at the 2016 Great Lakes Lighthouse Conference in May. In granting this award, they cited Radzak's long tenure as the light station keeper and the many preservation and history projects he as led, including the 1986 construction of the visitor center and a three-year restoration project that culminated in 2010 in time for Split Rock's centennial. Also under his stewardship, the historic site earned a designation in 2011 as a National Historic Landmark.

For more than a third of its history, Lee Radzak has cared for the iconic lighthouse on the north shore of Lake Superior. He has lived on site since 1982, raising his family there while also serving as ambassador to the hundreds of thousands of visitors who stop by each year. He has also been active in national lighthouse preservation efforts throughout his career.

About Split Rock Lighthouse
The Minnesota Historical Society site is located in Split Rock Lighthouse State Park on U.S. Hwy. 61, 20 miles northeast of Two Harbors. Restored to its 1920s appearance, the lighthouse offers a glimpse of life in this remote and spectacular setting. Tour the lighthouse, fog-signal building and the restored keeper’s dwelling. The visitor center features an award-winning film, exhibits and a museum store. For more information, call 218-226-6372 or visit www.mnhs.org/splitrock

The MNHS calendar of events is posted online at www.mnhs.org/calendar. The website also has information about all of the MNHS programs, museums and historic sites.

The Minnesota Historical Society is a non-profit educational and cultural institution established in 1849. MNHS collects, preserves and tells the story of Minnesota’s past through museum exhibits, libraries and collections, historic sites, educational programs and book publishing. Using the power of history to transform lives, MNHS preserves our past, shares our state’s stories and connects people with history.