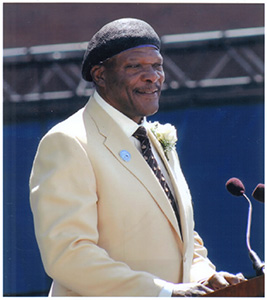 Vikings great Carl Eller will greet media for a preview of “Gridiron Glory: The Best of the Pro Football Hall of Fame,” on Friday, Sept. 23 from 11 a.m. to 1 p.m.

Organized by the Pro Football Hall of Fame, the exhibit includes more than 200 artifacts, photos and rare documents, footage from the NFL Film archives and interactive experiences. It also features a hometown heroes section about the Vikings, including the “Purple People Eaters.” In addition, a section of the exhibit will be devoted to the Minnesota Vikings Training Camp, where visitors can work on their vertical leap, broad jump, kicking and passing games.

Eller was a first-round draft pick in 1964 playing defensive end for the Vikings. He was also one of four players to make up the famed “Purple People Eaters.” During his career, the Vikings won 10 Central Division titles, the 1969 NFL championship and the NFC crowns in 1973, 1974, and 1976. He was inducted into the Pro Football Hall of Fame in 2004.

Mr. Eller will be available for short interviews on a first-come, first-served basis. No RSVP is needed. Coffee and cookies will be provided. Free parking is available in the History Center lot located off Kellogg Blvd. West.  This will be the only advanced access to the exhibit for reporters.