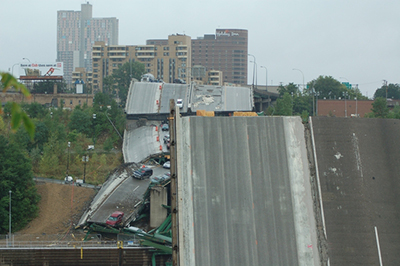 On Aug. 1, 2007, one of the most pivotal and painful events in recent Minnesota history occurred: the collapse of the I-35W Mississippi River Bridge during rush hour, killing 13 and injuring 145. Over the years, the Minnesota Historical Society has documented this disaster in its collections, including acquiring several post-collapse pieces of the bridge.

To help commemorate the 10th anniversary, MNHS will put a gusset plate from the bridge, the first piece to fail in the collapse, on display at Mill City Museum. A National Transportation Safety Board investigation identified the gusset plates were a likely cause of the collapse; they were too thin and failed under the weight of the bridge and its traffic.

The display will be in the museum’s Mill Commons and will be free and accessible to the public from July 28 to Aug. 30.

Across the river in St. Paul, visitors can also view the emergency exit door of a school bus involved in the bridge collapse, signed by all the children and adults on board, in the Minnesota History Center’s “Then Now Wow” exhibit.

MNHS collections have additional bridge remnants and signage, a shirt worn by a first responder on the scene, various photos throughout the bridge's history, and items from workers who rebuilt the bridge in 2008. The Minnesota State Archives holds Minnesota Department of Transportation plans for the bridge’s original 1967 construction and is currently processing MnDOT records concerning the aftermath of the collapse.

About the Minnesota Historical Society
The Minnesota Historical Society is a nonprofit educational and cultural institution established in 1849. MNHS collects, preserves and tells the story of Minnesota’s past through museum exhibits, libraries and collections, historic sites, educational programs and book publishing. Using the power of history to transform lives, MNHS preserves our past, shares our state’s stories and connects people with history. Visit us at www.mnhs.org.