One of the first women's rights conventions was held in Seneca Falls, New York, organized by Elizabeth Cady Stanton, Lucretia Mott, and a group of local Quaker women. Frederick Douglass and other supporters of abolition and votes for women also attended.

Mary J. Colburn delivered what is believed to have been the first public speech in Minnesota advocating for votes for women.

What may have been the state’s first petition supporting woman suffrage was introduced in the Minnesota House of Representatives on behalf of Eva J. Spaulding. It was referred to the joint committee on amendments to the constitution, but went no further.

A petition was presented to the legislature by Rep. John Seboski on behalf of Sarah Burger Stearns and others, asking for an amendment striking the word “male” from Section 1, Article 7, of the state constitution. No bill resulted.

A petition was presented by Mary A. Graves and other women to the Minnesota House of Representatives, requesting that “male” be removed from Section 1, Article 7, of the state constitution as a condition of qualification for voting. It was referred to the committee on elections where it was tabled.

The 14th Amendment to the US Constitution was adopted, granting citizenship to “all persons born or naturalized in the United States.” It also specified “male” as a qualification for voting.

After passing in the state legislature earlier that year, an amendment to the Minnesota constitution enfranchising non white male citizens was sent to the ballot. It passed, with 57 percent of the vote. With that, Minnesota became one of the first Northern states to affirm African American voting rights after the Civil War.

The first bill supporting votes for women put before the state legislature (House File No. 91) was defeated by one vote, 22 to 21. According to the St. Cloud Journal, there appears to have been a second vote taken in reconsideration of the bill, but it, too, was defeated, this time 24–21.

Elizabeth Cady Stanton and Susan B. Anthony formed the National Woman Suffrage Association. Their aim was to gain enfranchisement for women through an amendment to the US Constitution.

Women in Wyoming Territory became the first in the United States to win full suffrage.

Sen. Henry Chester Waite of Stearns County presented a petition with 150 signatures in favor of votes for women to the Minnesota State Senate.

Sen. Daniel Pratt of Indiana presented a petition to the US Senate with 3,200 signatures from supporters of women’s enfranchisement in New York and other states.

Rep. Abram McCormick Fridley of Becker presented a petition with 600 signatures in favor of women’s right to vote to the Minnesota House of Representatives, asking for an amendment to the state constitution and removing “male” as a voting qualification.

The 15th Amendment to the US Constitution was ratified, extending suffrage to Black men and stating that the vote “shall not be denied or abridged by the United States or any State on account of race, color, or previous condition of servitude.”

Rep. Fridley of Becker submitted a bill to amend section 1, Article 7, of the state constitution to include women voters.

The Minneapolis Daily Tribune reported that the female suffrage bill was passed by the Colorado council and that votes for women were recommended for consideration during the constitutional convention for the state of Illinois.

Utah Territory enacted a law providing for the enfranchisement of women.

The Minnesota House of Representatives passed the female suffrage bill, 33–13.

National suffrage leader Elizabeth Cady Stanton began a series of lectures titled “Open the Door.” The lecture tour marked her first appearance in Minneapolis, where she lectured on March 22–23. She also lectured in St. Paul on March 24 (“exclusively to females”); in Stillwater on March 25; in St. Anthony on March 26; and in St. Cloud on March 27.

The St. Anthony Democrat reported that Sen. William Lochren of St. Anthony was contesting the Governor’s veto of the female suffrage bill, declaring that, because it was a constitutional amendment passed by legislative majority, it must be submitted to the people for a vote, and would be the following November. [Reference librarians at MNHS and the Minnesota Legislative Reference Library have not found evidence that Lochren’s proposed vote occurred.]

The Minnesota legislature approved a constitutional amendment giving Minnesota women the right to vote in school elections. This was added to the ballot for voter approval in the November general election.

Following voter approval of the amendment, the Minnesota Legislature passed an enabling act with specific guidance for women’s school suffrage and office-holding.

A petition to give women a vote on the liquor question was tabled by the Minnesota House of Representatives. The prohibitory liquor bill (HF 133) also failed.

An enlarged school suffrage bill entitling women to vote for county superintendents of schools was approved.

Petitions were presented each legislative session for suffrage on the liquor question and on municipal suffrage, but no action was taken.

Rep. Sylvanus A. Stockwell introduced House File 361, proposing to give women the right to vote in municipal elections. The bill was placed on General Orders on April 2 and 7, but it was indefinitely postponed by the House by a vote of 53–40. The committee on elections offered no recommendation.

Sen. George T. Barr of Blue Earth County presented a petition granting women municipal suffrage. A new bill, Senate File 289, would enfranchise women in municipal elections, if they met an education requirement (not required for male voters). Before it could be voted on, the Municipal Suffrage Bill was substituted by a proposed constitutional amendment for full female suffrage. That bill passed the Senate and House, but failed to obtain the necessary 2/3 majority.

Minnesota voters approved a constitutional amendment enfranchising women on library questions. The bill was presented to the House of Representatives in 1897 by Wallace Barton Douglas, representing Becker, Clay, and Wilkin counties, at the behest of the Minnesota Federation of Women’s Clubs.

The National American Woman Suffrage Association convention was held in Minneapolis, with Susan B. Anthony, Carrie Chapman Catt, and other noted suffragists on hand to speak.

House File 231 proposing an amendment to the state constitution enfranchising women was introduced by Rep. George W. Higgins of Hennepin County. It was referred to the Committee on Elections but was hijacked by the judiciary committee until Higgins and the Speaker insisted it go to the former for consideration as intended. The Elections Committee recommended indefinite postponement.

The Harmony News reported that “Mr. Higgins, Prohibitionist, piloted the woman suffrage amendment safely through to general orders in the House even after the Committee on Elections had recommended it for indefinite postponement.”

House File 228 proposing a suffrage amendment was introduced by Rep. J. N. Johnson from Lac Qui Parle County. It passed the House 59–46, but did not achieve the 2/3 majority needed. It was postponed indefinitely.

The Minneapolis Tribune reported that a large number of names were added to a suffrage petition at the Suffrage tent the previous day at the State Fair.

After Senate File 59, the suffrage amendment introduced by Sen. Ole Sageng, passed in the House by a majority of 81, the Senate defeated the bill 32–30. Initially, the vote was tied 30 to 30, but the final two votes defeated the bill. Sen. George Potter Wilson of Hennepin County was staunchly anti suffrage, but said he would vote yes if the other holdout, Sen. Frank Glotzbach of Rice County, voted yes. Glotzbach voted no.

Sen. Ole Sageng introduced Senate File 15, proposing an amendment to the State Constitution to extend equal suffrage to women. It was referred to the Committee on Elections, which recommended passage, but the bill failed in the Senate 34–33. No reconsideration vote was taken.

Rep. Carl A. Wold introduced House File 1142, an act granting women the right to vote for presidential electors. It was referred to the Committee on Elections, but went no further.

Two suffrage bills were submitted to the House of Representatives in February, dividing leaders of the Minnesota movement. One bill, authored by senators Sageng and Putnam, affirmed women’s statutory right to vote in presidential elections. The other, introduced by Rep. A. M. Peterson, enfranchised women by amendment. Clara Ueland favored an amendment to the US Constitution as the most likely way for women to gain full suffrage, and supported the presidential suffrage bill as a means to an end.

The Christianson bill passed the Senate 49–11. After its approval by Gov. Joseph Burnquist on March 24, Minnesota women could vote for president, but not for other offices such as US representatives or senators.

The United States Congress approves the 19th Amendment to the US Constitution, sending it to the states for ratification.

In a special session, a joint resolution was approved  by both bodies of the state legislature, ratifying the 19th Amendment to the US Constitution.

The 19th Amendment to the US Constitution became law. The amendment prohibits the states and the federal government from denying citizens the right to vote on the basis of sex. 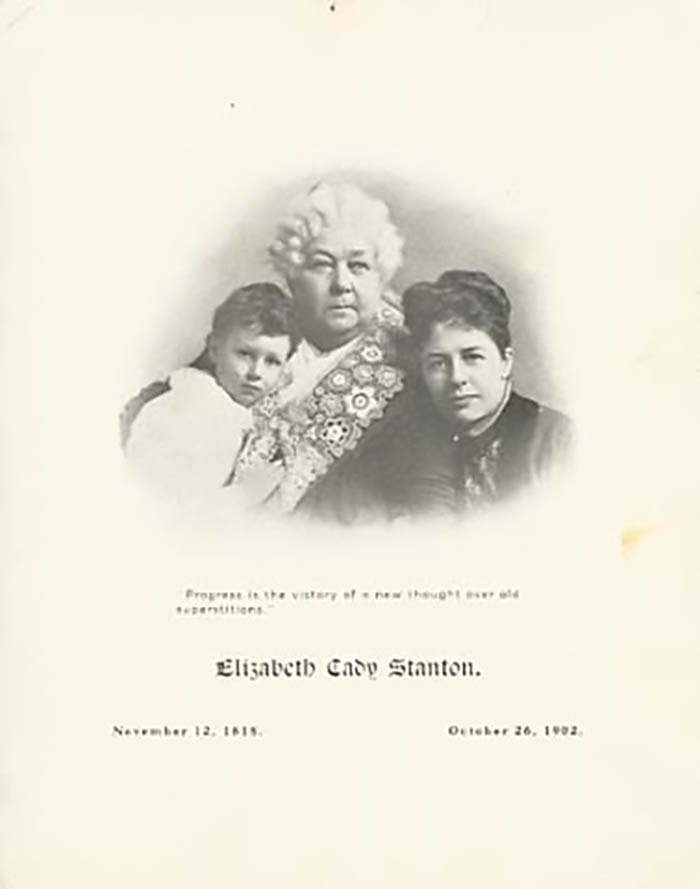 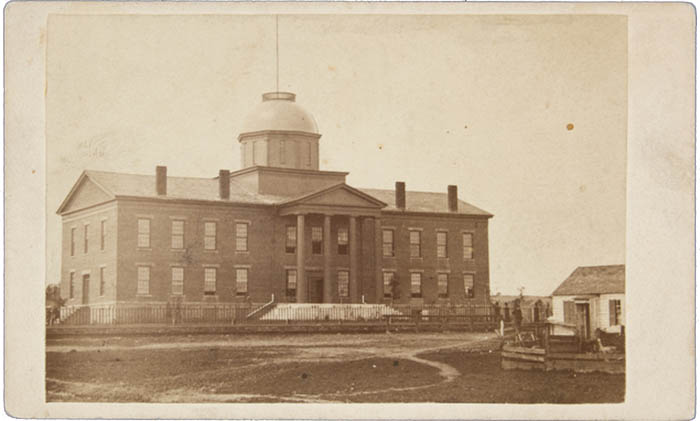 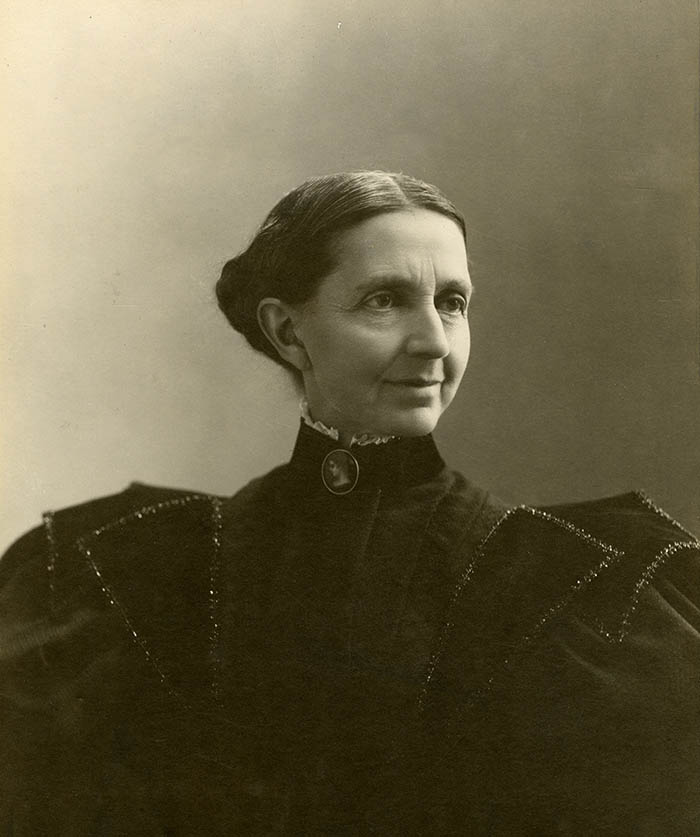 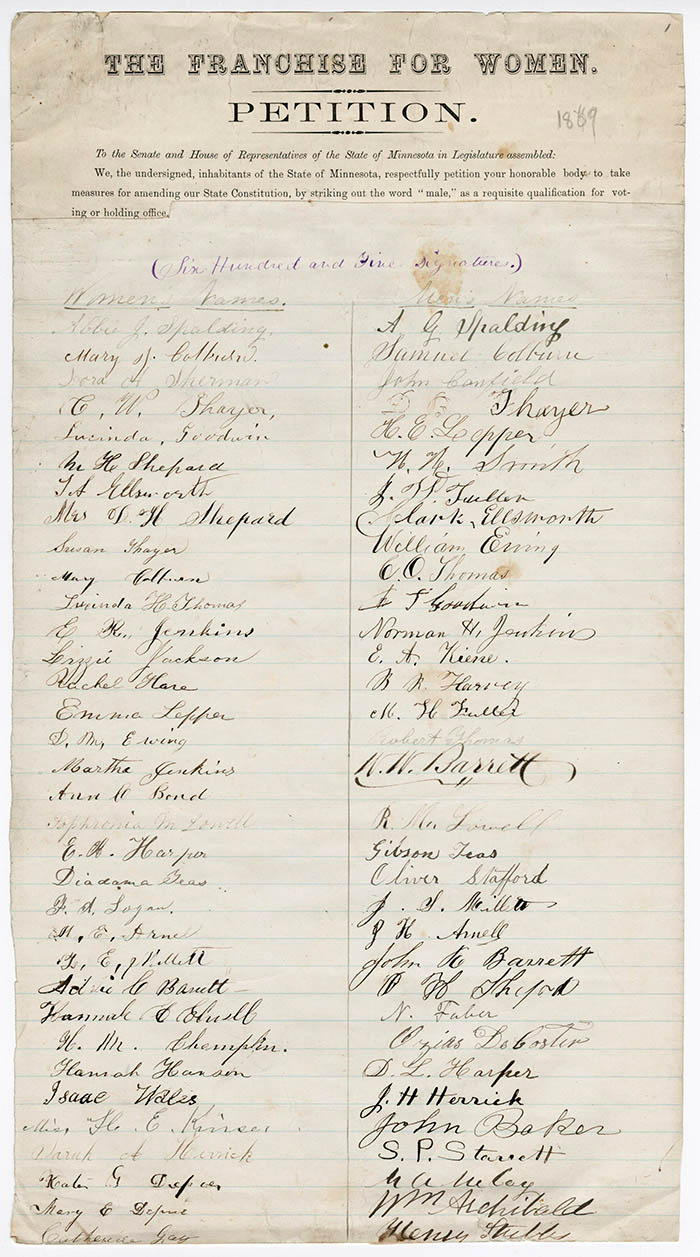 Page one of a thirteen-page petition for women’s suffrage, 1869. MNHS collections. 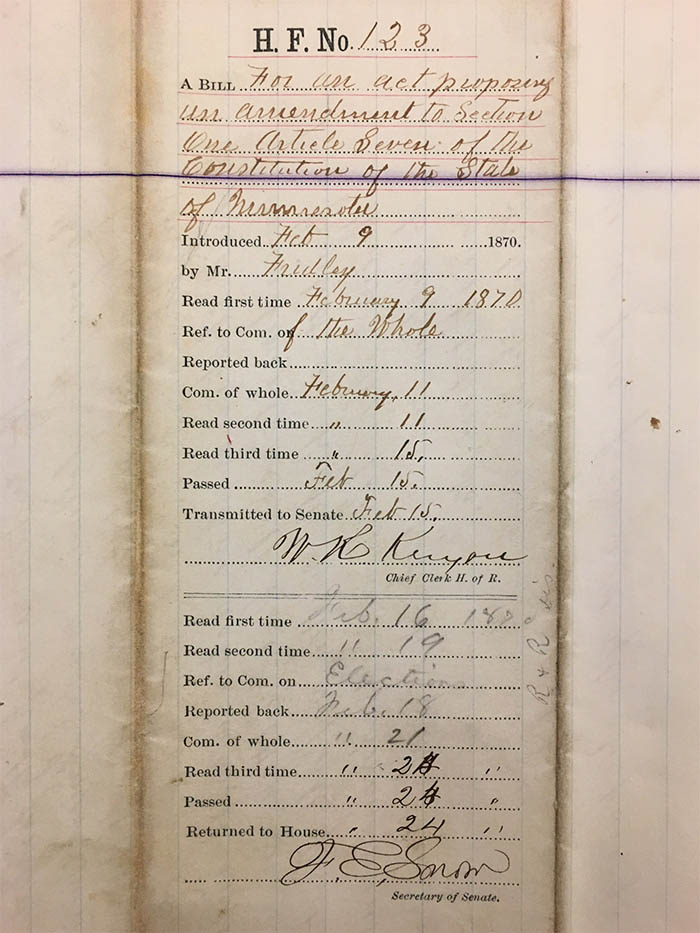 A bill to enable women to vote in school elections, 1876. MNHS collections. 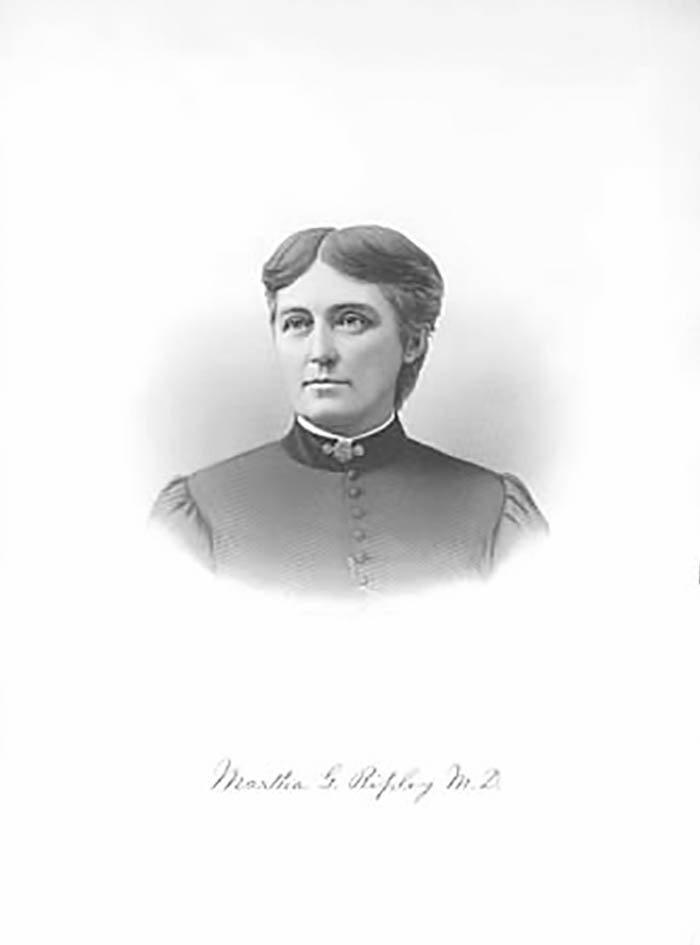 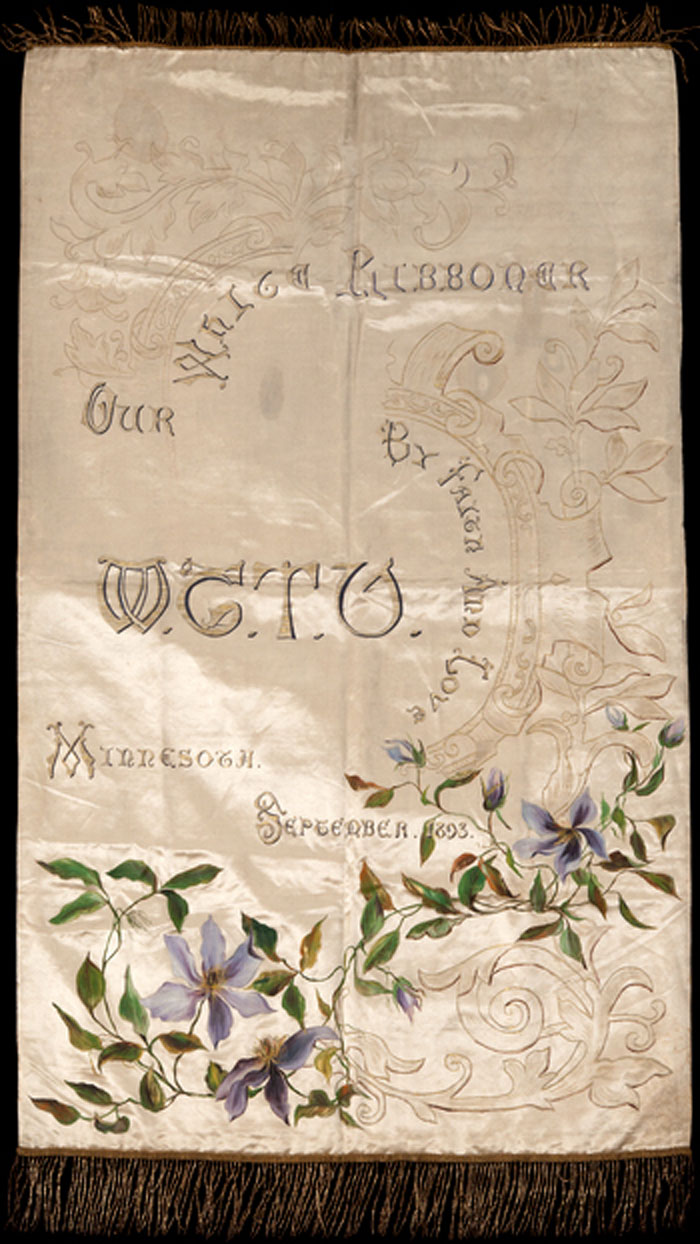 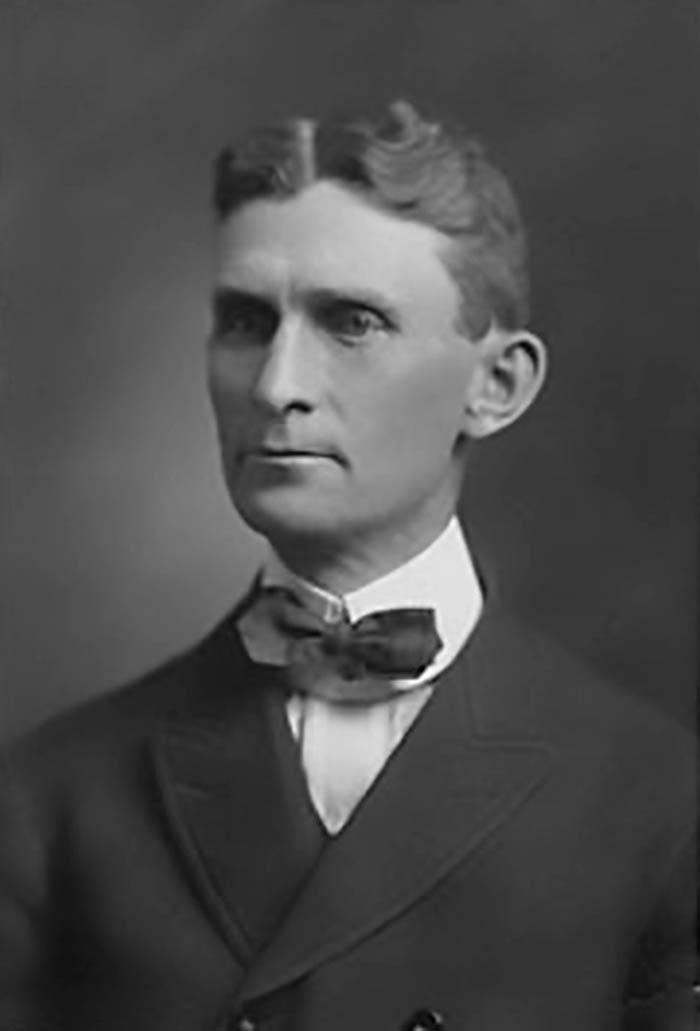 Sylvanus A. Stockwell, about 1900. MNHS collections. 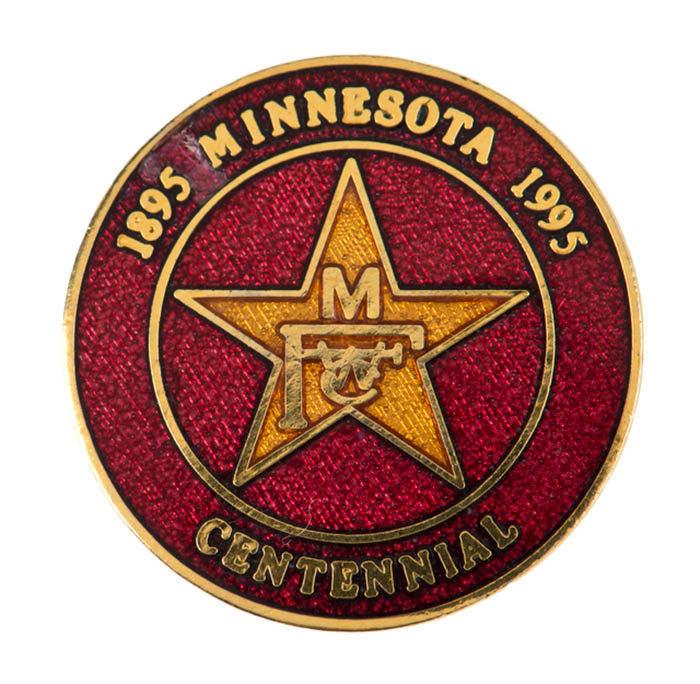 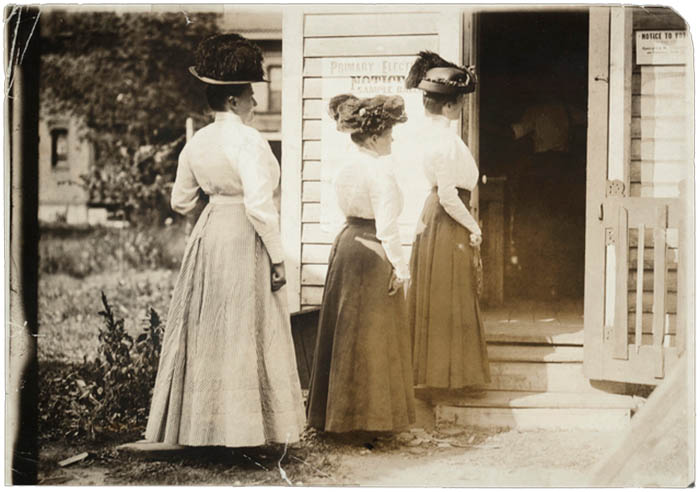 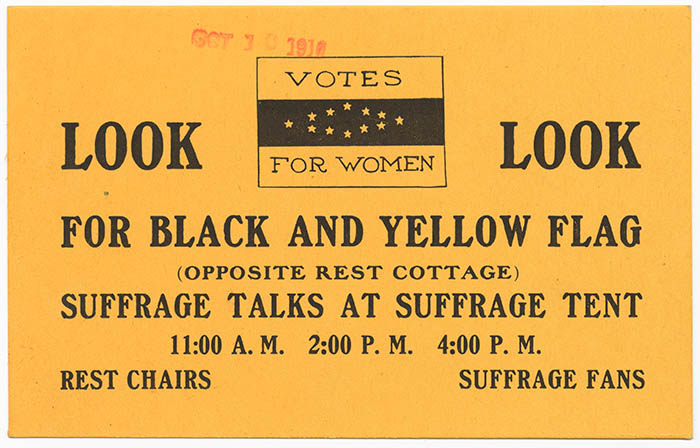 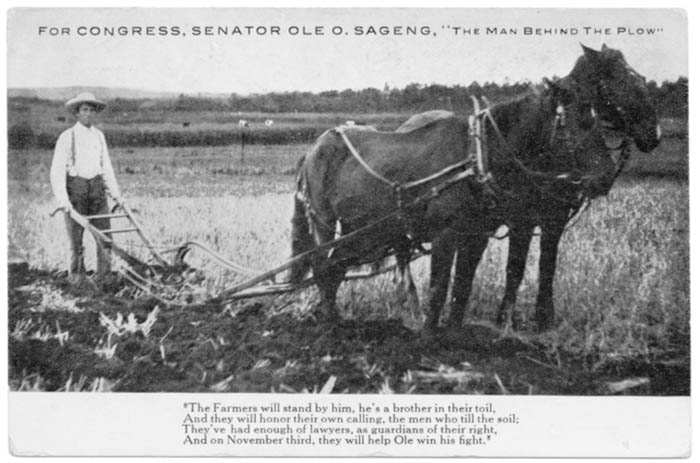 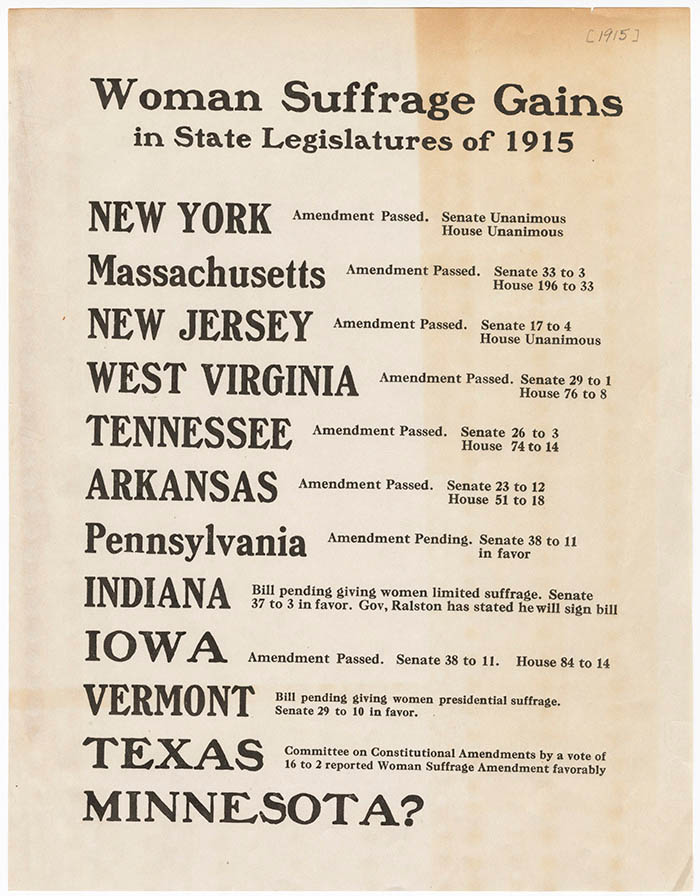 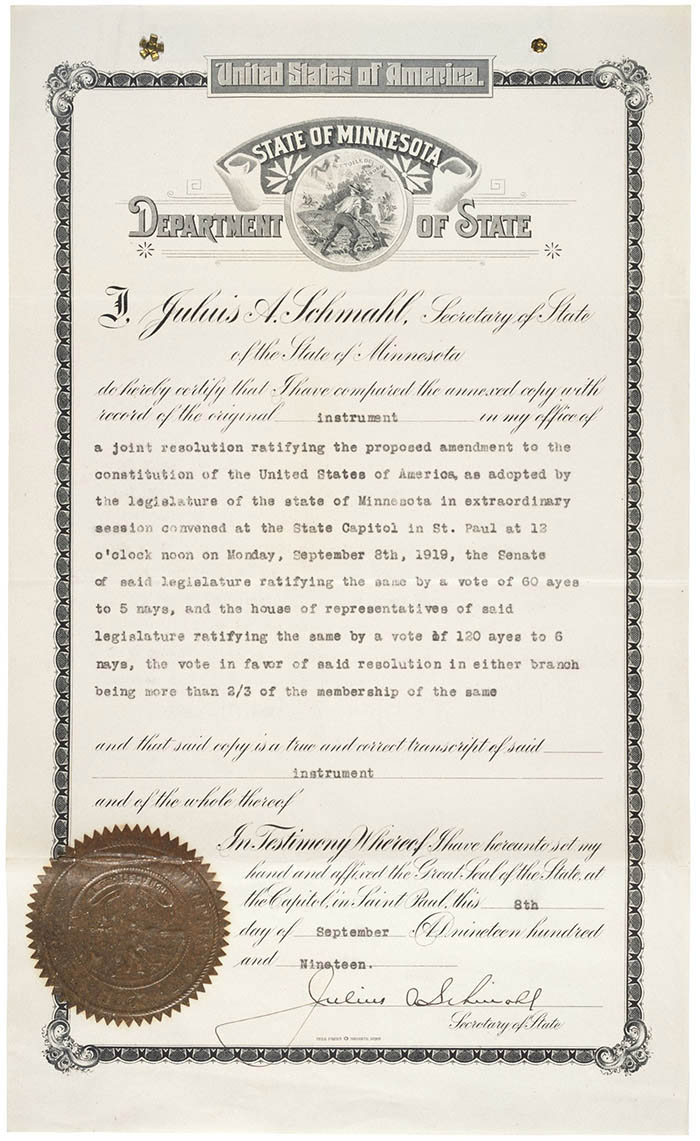 Minnesota ratification of the 19th Amendment, 1919. Records of the US House of Representatives, National Archives. 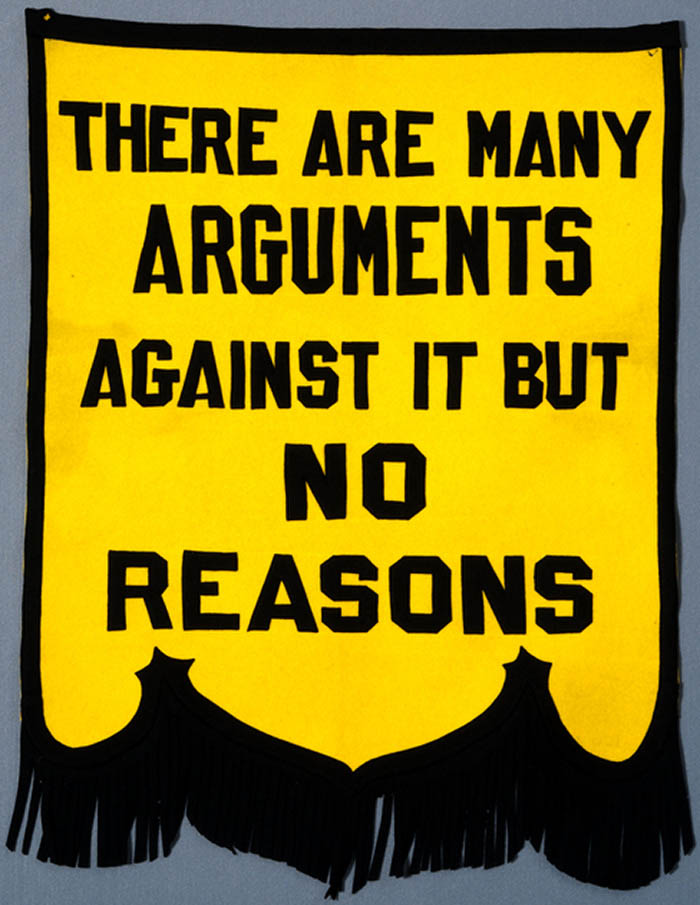