Between 1805 and 1858, treaties made between the US government and the Dakota nation reduced Dakota lands and significantly altered Minnesota's physical, cultural, and political landscape. These treaties had serious implications for the future of Dakota-US government relations. It is probable that many Dakota left treaty negotiations feeling cheated because often large portions of the annuity money promised to the Dakota in exchange for land went immediately to traders who made claims of debts owed by the Dakota. By 1862 delayed annuity payments from the US government, coupled with crop failures and the refusal by traders and Indian agents to extend credit to the Dakota, left many Dakota people hungry and desperate. On Aug 18, 1862, a group of Dakota soldiers began attacking trading posts and settlements along the Minnesota River Valley, and the US-Dakota War of 1862 began.

Soon after the fighting began, Sibley was appointed colonel by Minnesota Governor Alexander Ramsey and given command of the state’s military response. On Aug 20, 1862, Col. Sibley and the 6th Minnesota Infantry, a hastily formed regiment of local volunteers and army troops, marched from Fort Snelling toward the town of St. Peter. After waiting several days for supplies and reinforcements, Sibley and his forces advanced toward Fort Ridgely with approximately 1,400 soldiers, arriving on Aug 28. After reinforcing Fort Ridgely, Sibley focused on training the troops for further battles with the Dakota. While at the fort, Sibley sent out a burial party to locate and bury the remains of civilians. The burial party was attacked by Dakota soldiers at Birch Coulee on Sep 2, 1862. When reports of the attack arrived at Fort Ridgely, Sibley immediately left for the fighting with the remainder of his force, which by that time included two companies of the 7th Minnesota Infantry. After the Dakota withdrew from the battle, Sibley and his troops returned to Fort Ridgely to continue their training.

In early September, Sibley tried to negotiate a settlement with Taoyateduta, but Taoyateduta did not agree to stop the fighting. He explains the reasons for the war and states that he is willing to release prisoners. Sibley demanded surrender, but Taoyateduta refused. Under considerable political pressure to defeat the Dakota quickly, Sibley and his troops moved up the Minnesota River, arriving at Lone Tree Lake (mistakenly identified as Wood Lake) where they camped on the night of Sep 22. The next morning several soldiers from the newly arrived 3rd Minnesota Infantry left camp to forage for food and stumbled upon a group of Dakota soldiers who had been preparing to attack Sibley’s forces. The ensuing Battle of Wood Lake on Sep 23, 1862, was the last major battle of the US-Dakota War of 1862, resulting in a decisive defeat for the Dakota. 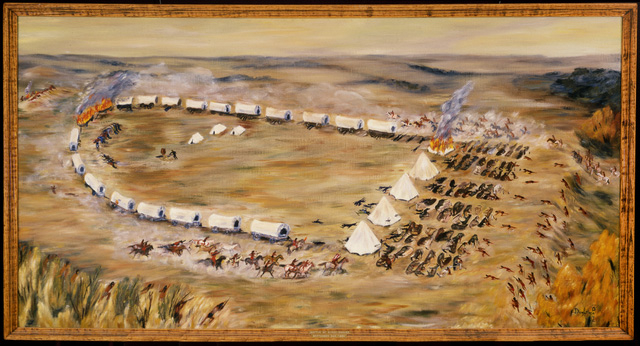