When the Lindbergh family donated its 110-acre farm to the state of Minnesota in 1931, a state park was created in Congressman C.A. Lindbergh’s honor.

Little attention was given to the development of the park until 1936, when it became a local project for the Works Progress Administration (WPA). In addition to repairing the Lindbergh home, other structures — buildings and bridges, trails, trail shelters, and parking lots — were constructed by the WPA on the former Lindbergh farm.

The natural beauty of the original farm was captured and enhanced with the completion of the project. Lindbergh was pleased with the results and stated his thoughts in a letter to his most trusted friend in Little Falls, Martin Engstrom:

"I hope the property is always handled in a way which will permit people from Little Falls and the nearby country to obtain real pleasure from going there. It should be a place where families can go on Saturday and Sunday and where children can enjoy playing in the creek and river."

One of the first buildings to be added was the log park shelter building located west of the Lindbergh home in what is now Charles A. Lindbergh State Park. Just west of the shelter a large granite water tower was constructed, which provided water to a small restroom building and water fountain. Nearby is where one of the largest and oldest pine trees was located, named the “sentry” by Lindbergh when he was a young man, but all that remains today is the massive trunk. Originally, the park caretaker lived in the small home (built about 1901) just north of the park shelter, the home where the Lindberghs' hired farmer lived with his family when the property was a working farm.

Solid and well built, the structure known originally as “the kitchen shelter” was one of the first WPA buildings to be constructed in Lindbergh State Park. According to a 1937 WPA report, “All log structures constructed are painted with a creosote and linseed oil stain. A soft brown harmonious color is thus obtained, which gives a very pleasing appearance and at the same time preserves the wood well.”

A contemporary magazine described the shelter: “…the peeled pine logs, the rustic doors (assembled entirely without the use of nails), and the great stone fireplace make it a fine example of woodcraft. Behind the fireplace is a large stove for cooking purposes.”

The limestone water tower, or "water house," constructed during the summer of 1939, was one of the last structures built in the park by the WPA. Built of native granite, the tower held 5,000 gallons of water, which were pumped into the restroom, water fountain, and caretaker’s residence. The structure still stands today, although it is not used as a water source.

Other shelters and additions

A 1937 progress report on the park development noted that shelters "are now being built along foot trails to afford protection in the event that visitors exploring the trails encounter inclement weather." By the time construction was completed, there were several shelters of various designs throughout the park. Because of contact with the ground, shelters with heavy dependence on wooden elements decomposed during subsequent decades. The stone ruin located 100 yards north of the Lindbergh home is the only remnant of a WPA park shelter.

Many hiking trails were also added and trees planted. According to the newspaper the Little Falls Transcript, "Pike Creek will be spanned by two rustic bridges, one at the site of Charles Lindbergh's famous suspension bridge, and another at a south bend. Two miles of footpaths will be built ... four thousand trees and bushes will be transplanted to fill in the open spaces.” 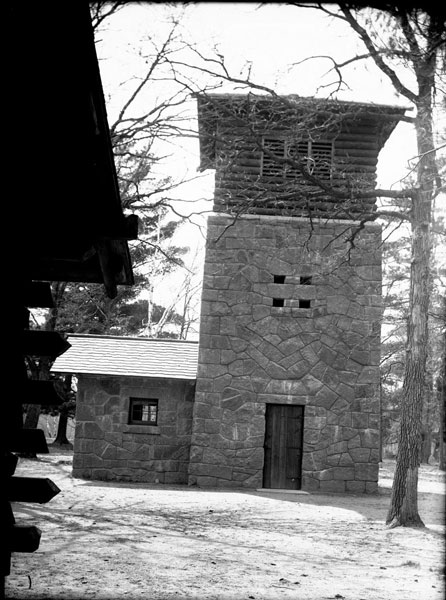 Water tower built by the WPA in Lindbergh State Park.