Charles Lindbergh’s fascination with flight began when he was boy, growing up in Little Falls. In his book The Spirit of St. Louis (1953), Lindbergh recalled:

“When I was a child on our Minnesota farm, I spent hours lying on my back in high timothy and red top, hidden from passersby, watching white cumulus clouds drift overhead, staring into the sky. It was a different world up there. You had to be flat on your back, screened in by grass stalks, to live in it. Those clouds, how far away were they? Nearer than the neighbor’s house, untouchable as the moon — unless you had an airplane. How wonderful it would be, I’d thought, if I had an airplane — wings with which I could fly up to the clouds and explore their caves and canyons — wings like a hawk circling above me. Then, I would ride on the wind and be part of the sky, and acorns and bits of twigs would stop pressing into my skin.”

In 1922, Lindbergh left college in Madison, Wisconsin, and enrolled in flying school at the Nebraska Aircraft Corporation in Lincoln, Nebraska. He flew for the first time on April 9, 1922, when he and Harlan (“Bud”) Gurney, who would become a lifelong friend, went up in a Lincoln Standard "Tourabout" biplane, piloted by the instructor, Otto Timm. Lindbergh later recalled this first flight:

"Trees become bushes; barns, toys; cows turn into rabbits as we climb. I lose all conscious connection with the past. I live only in the moment in this strange, unmortal space, crowded with beauty, pierced with danger. The horizon retreats, and veils itself in haze. The great, squared fields of Nebraska become patchwork on a planet’s disk." (The Spirit of St. Louis).

But two months later, before he could make his first solo flight, Lindbergh left the company that sold their training planes. 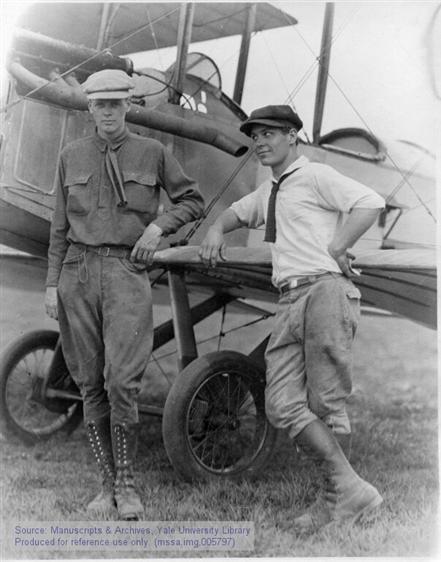 “Barnstorming” was the term created for the traveling stunt flying that became popular in the early days of aviation. In order to gain more flight experience and to earn money for lessons, Lindbergh joined Errold G. Bahl’s barnstorming crew as a wing walker and parachutist.

After about a month, Lindbergh returned to Lincoln to work at the Nebraska Aircraft Corporation. It was during this time that he met parachute maker Lt. Charles Hardin, who taught him how to make a “double jump,” in which one chute opens and is discarded, allowing a second chute to deliver the jumper to the ground.

But Lindbergh's first leap was troubled. He started from 1,800 feet and the first chute opened perfectly, but the second chute did not open right away. Lindbergh landed safely but decided “that if I could fly for ten years before I was killed in a crash, it would be a worthwhile trade for an ordinary lifetime.”

C.A. accepted his son’s career choice and agreed to finance the purchase of his first airplane, a Curtiss JN4-D, commonly called a “Jenny.” The plane was a two-place, open tandem-cockpit biplane that had been used for training during the war. Lindbergh bought the plane from Souther Field in Georgia. He later wrote, “Everybody at Souther Field took for granted that I was an experienced pilot when I arrived to buy a plane. They didn’t ask to see my license, because you didn’t have to have a license to fly an airplane in 1923." It was at Souther Field, flying in his newly acquired Jenny, that Lindbergh made his first solo flight.

Lindbergh flew the plane back to Minnesota, barnstorming along the way. He then used the plane to support his father's run for Senate. On June 3, 1923, Lindbergh took his father up, instructing him to throw hundreds of handbills from the plane. Later he recalled, “it did not occur to me that he might throw them out all at once, but he did, and the thick stack of sheets struck the stabilizer with a thud." The plane, with both father and son aboard, hit the ground in what Lindbergh insisted on referring to as a “crack-up,” instead of the more serious “crash.”  The plane did little good in helping the senior Lindbergh’s run for office, which he lost. 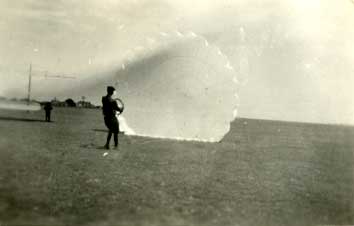