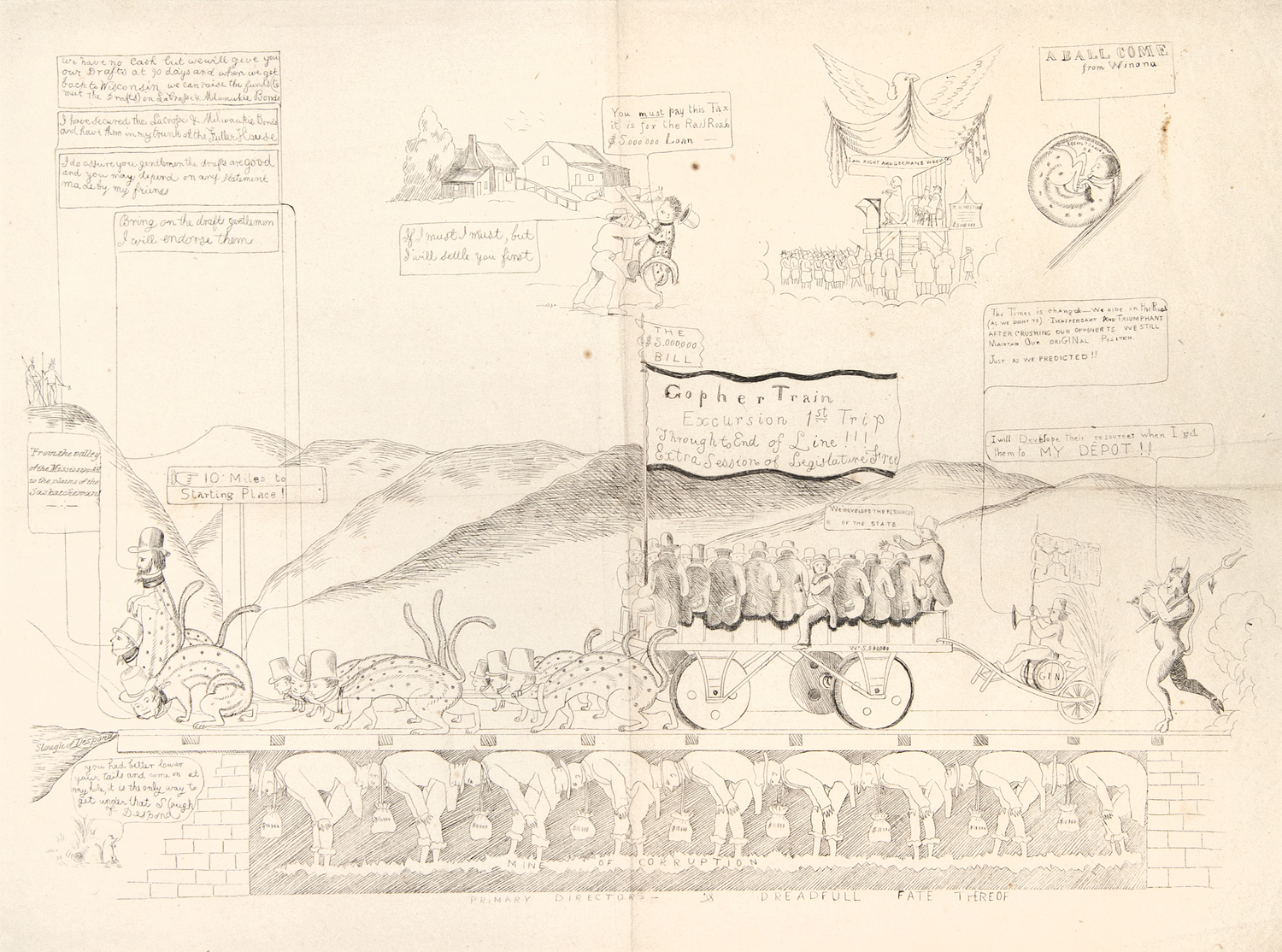 This political cartoon is from 1858. This cartoon answers the age-old (okay, actually 164 year old) question – why are we the Gopher state? This very cartoon started it all.

One of the first acts of the legislature of the new state was to amend the brand new constitution, enabling them to issue credit and loan $5 million (or $ 137,000,000 in today’s dollars) to railroad interests. While some were against this, most people supported the amendment: it passed with 25,023 votes in favor and 6,733 against.

This cartoon is clearly in the nay column. It shows a railroad car full of bondholders being pulled by nine striped rodents with human heads, representing the legislators (many of whom also had a stake in the railroads). The issue of business looking for money never gets old, does it?

Why gophers though? A good theory is that gophers were a major nuisance to homesteaders in the western, prairie-part of the state – the same place the railroads were going.

The artist is R. O. Sweeny from Saint Paul; this was published as a broadside when the issue was being debated. From the messy ordeal of state development, we got both the railroads and our nickname. 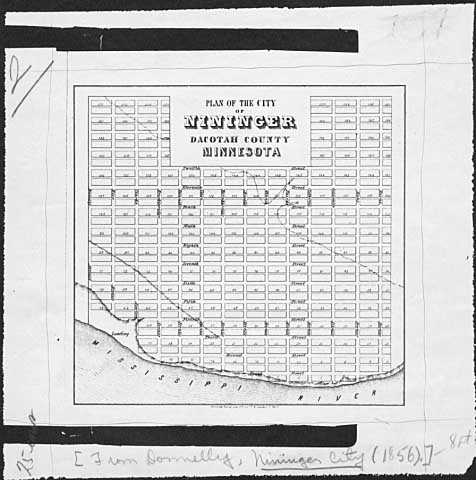 This is the layout plan for the city of Nininger c.1856, the town that almost was.
Ignatius Donnelly promoted the town as "the best place to live in the Northwest."
Nininger’s peak population was nearly 1,000 in 1858; due to a financial crisis by 1869 the town was no more.
Learn more about it here: https://www.mnopedia.org/place/nininger 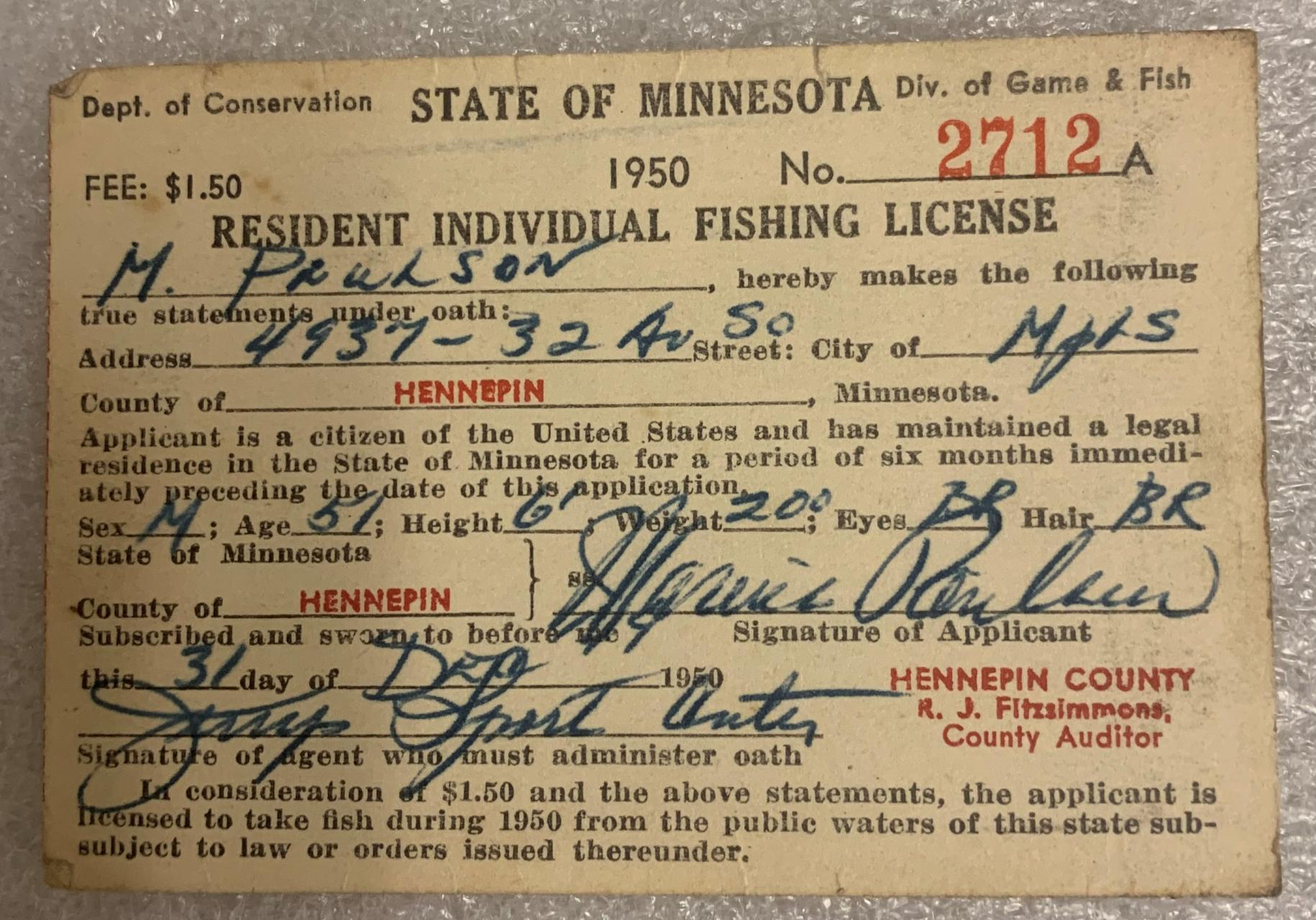 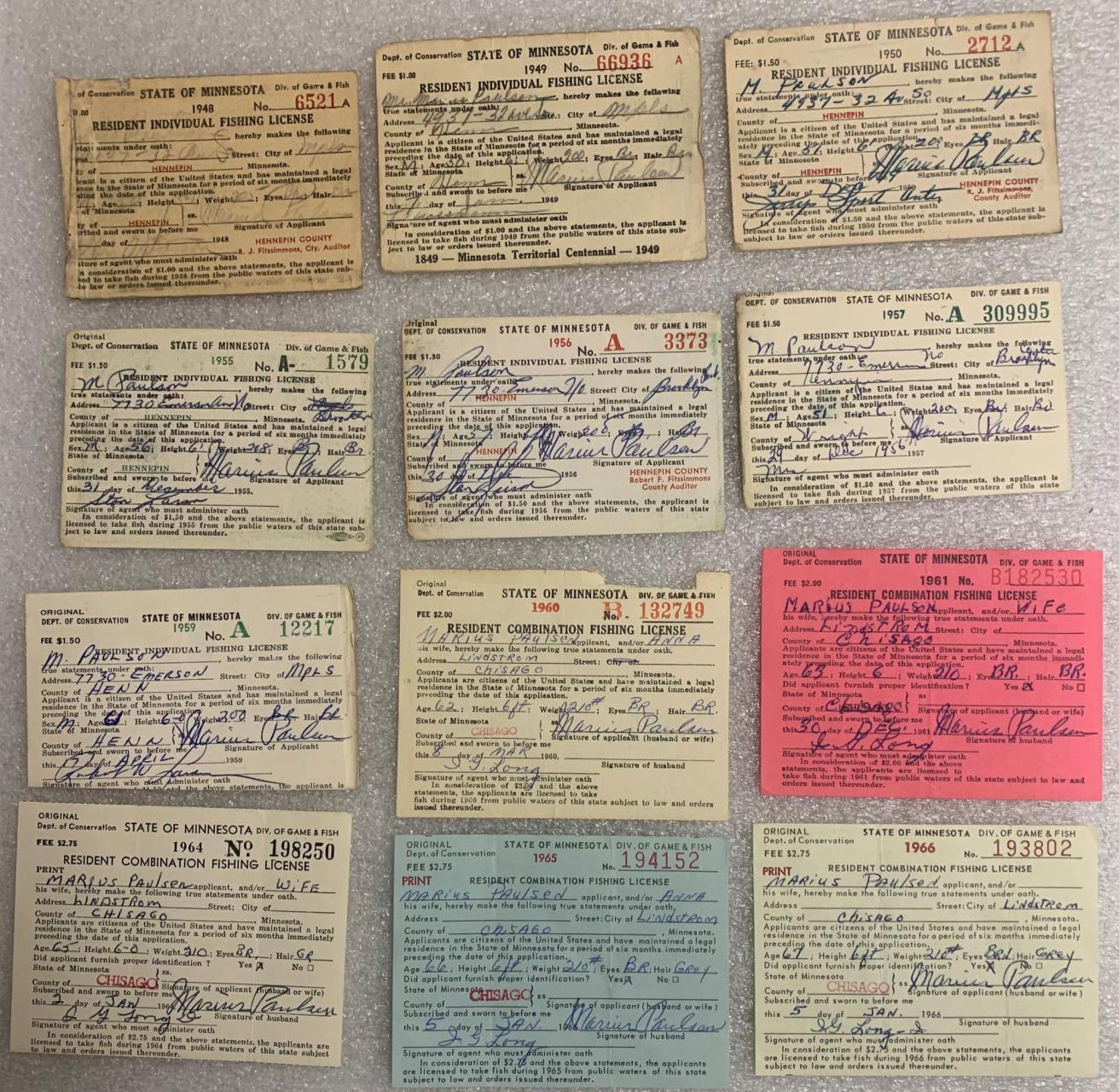 As Minnesotans gear up for another ice fishing season this winter, it is important to remember a fishing license.

Marius Paulson never forgot his fishing licenses, even after we did!

Paulson donated his fishing licenses he collected between 1931 and 1967 back in 2015. When we lost contact with him, the licenses remained in “collections limbo” until MNHS could acquire a signed donation contract. 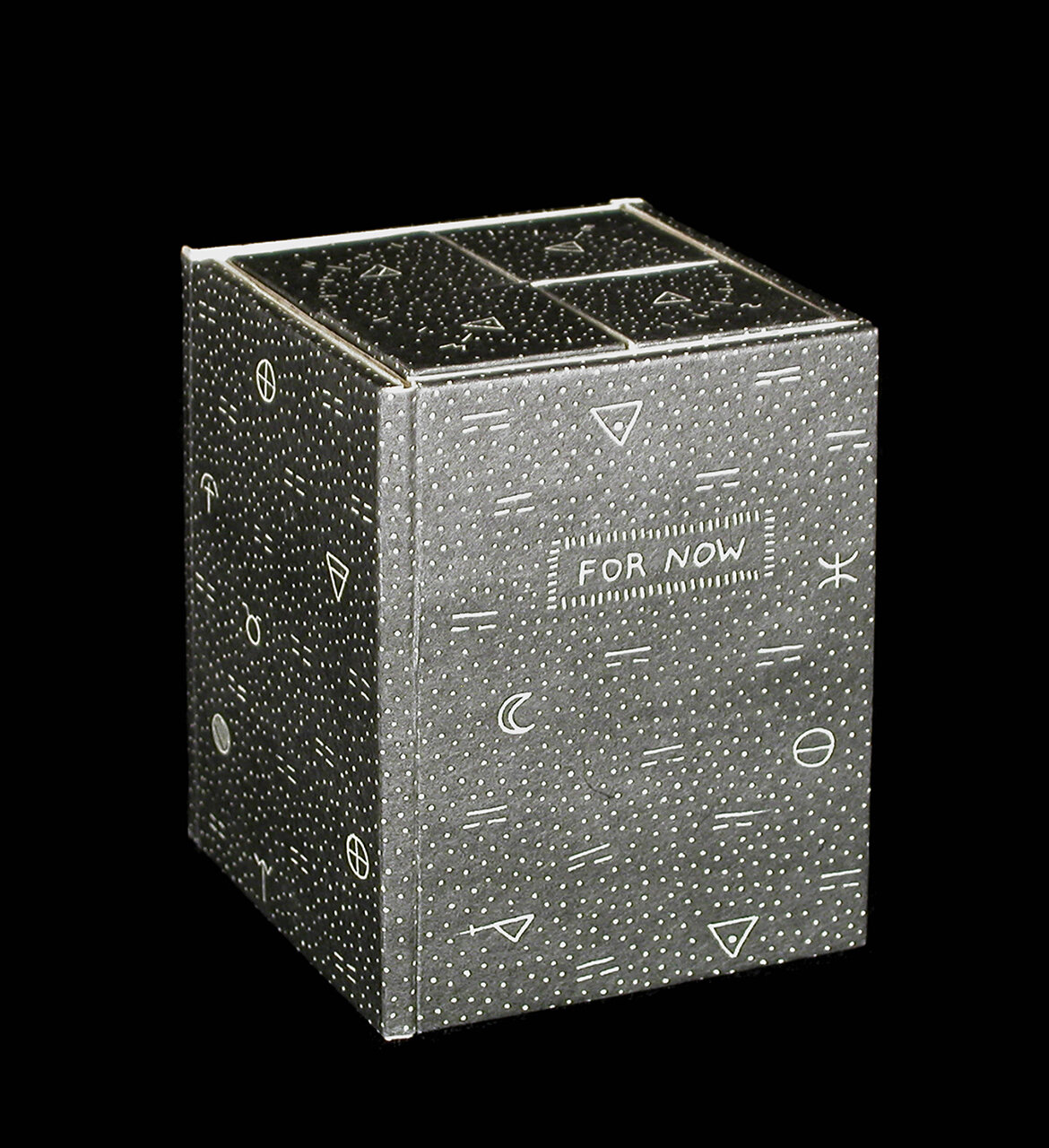 This fine press book was described by the Minnesota Center for Book Arts as: "At once a book, a box, and a puzzle, For Now was born from a desire to create a book about dust and evolved… the structure came first and inspired her to focus the four sections of the book on specific places from her own experience that correlate to the four directions and elements: West/Water/Hawaii; North/Earth/Minnesota; East/Air/Ireland; and South/Fire/Florida."
Beautifully hand-crafted by Jody Williams at her Flying Paper Press, it won the 2019 Minnesota Book Artist.
The MNHS is proud to have a copy in its Library Collection. 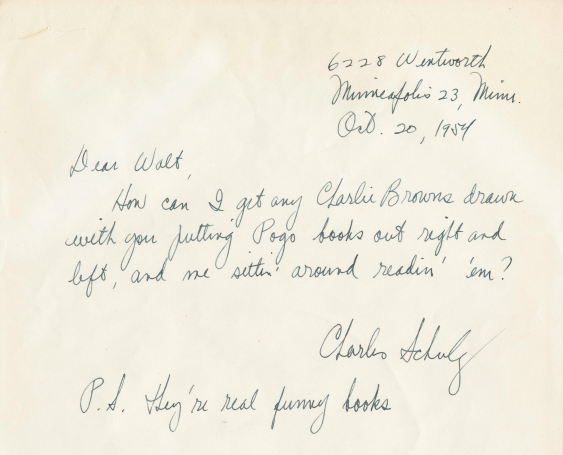 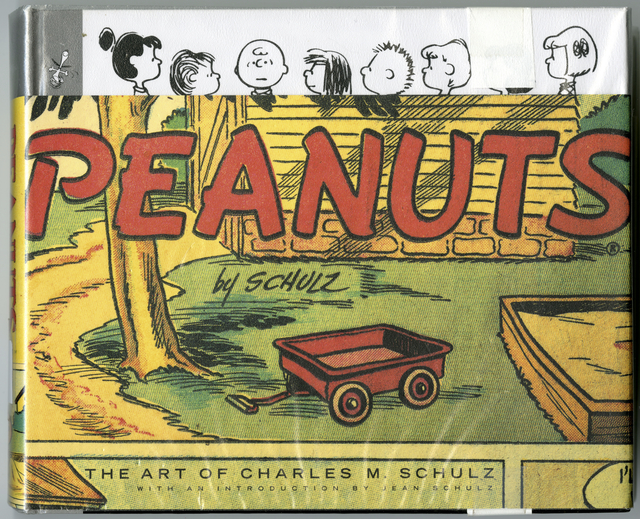 This past Saturday, November 26, would have been Charles Schulz's 100th birthday.
Creator of the wildly successful "Peanuts," he was born in Minneapolis and grew up in Saint Paul.
The MNHS collection holds his very first and last published comic strips; many "Peanuts" books; and two original letters from him to the creator of the comic "Pogo" from Schulz, one of which is seen here from 1954.
Learn more about this prolific artist here:
https://libguides.mnhs.org/schulz
https://www.mnopedia.org/person/schulz-charles-monroe-1922-2000
http://www2.mnhs.org/library/findaids/01149/pdfa/01149-00001.pdf 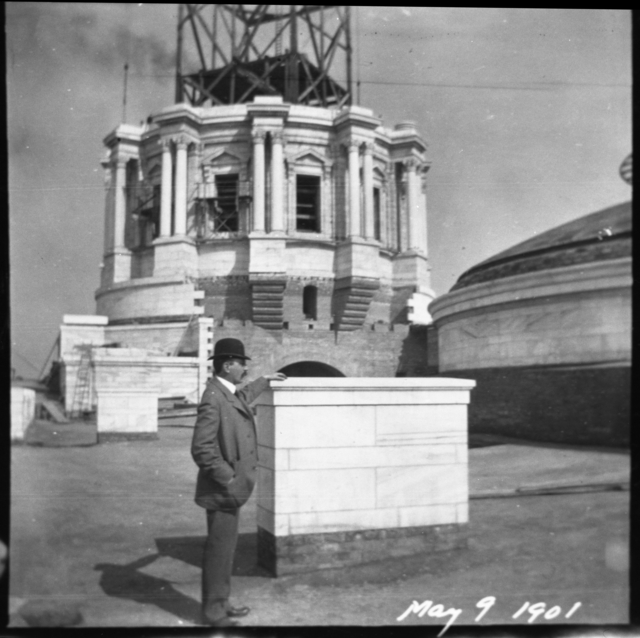 Cass Gilbert's birthday was yesterday.
Gilbert grew up in Saint Paul and became an early celebrity architect. The Minnesota State Capitol was one of his first major projects.
This is a photo of him standing before the partially completed State Capitol dome in 1901.
Learn more about him here: https://www.mnopedia.org/person/gilbert-cass-1859-1934 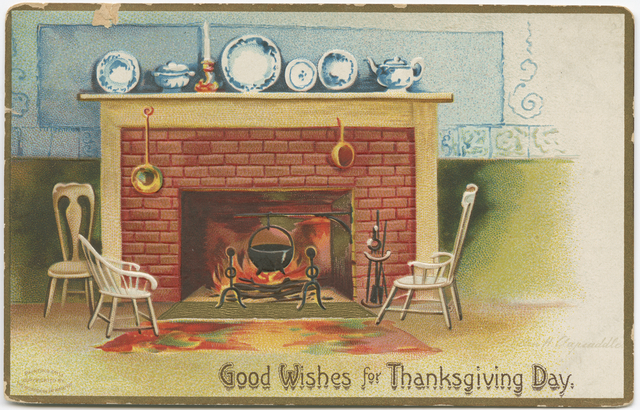 Happy Thanksgiving! All best to you and yours.
This Thanksgiving greetings postcard was created and used in 1908. 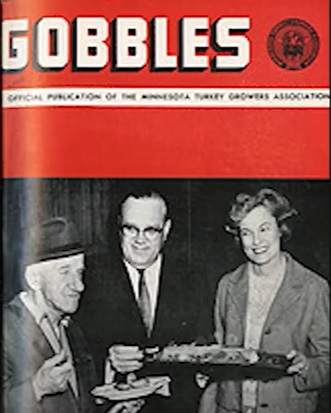 It is once again time to Talk Turkey!
Join Lori and Jen as they show some top turkey items in our collection, including a couple of beauties you might not expect. 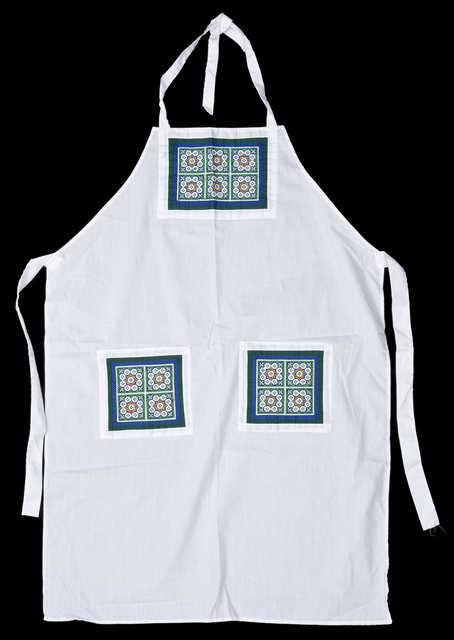 Continuing our getting ready for the cooking holiday theme, here is an apron.
But not just any apron. This is a bibbed apron with paj ntaub (pa ndau) of green, blue, and orange cross stitch applied.
It was sold originally at Hmong Handiwork in Saint Paul between 1981-1998.

Hmong Handiwork was a consignment shop selling hand-stitched items made by Hmong women who had resettled in the United States or were still in the refugee camps in Thailand. 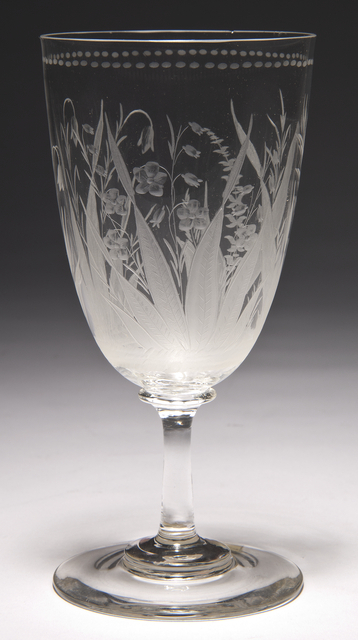 Are you getting excited to get out the fancy glassware later this week?
Before doing that take a look at this beauty from 1865. This "drinking goblet" is etched with floral and grass designs; rows of dots decorate the rim.
These would need to be washed by hand, no doubt.