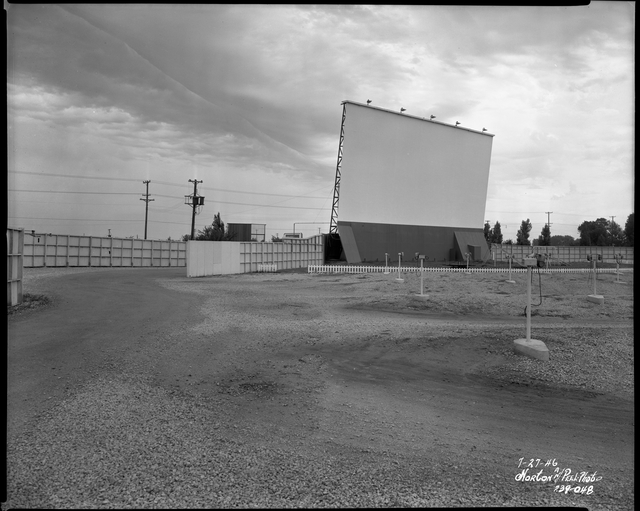 Thinking of places to visit once stay-at-home restrictions lift? Drive-in theaters offer a fun, nostalgic alternative. Drive-in theaters boomed in popularity at the end of WWII due to increased automobile production and popularity and became a cherished past-time during the 1950s and 60s. At their height in popularity, close to eighty drive-ins dotted Minnesota. Today six remain operational.

The first drive-in in Minnesota opened in 1948 in Bloomington. The architect was Jacob J. Liebenberg of the noted Liebenberg and Kaplan architectural firm. Liebenberg designed more than 200 motion picture theatres in the Midwest, many in the art deco style. The Starlite Drive-in 5 in Litchfield, Minnesota, originally opened back in 1955 with just a single screen. It was operational until 1981, when it closed because of a lack of business. It remained empty until 1997 when new owners purchased the property. The owners restored the theater. It reopened a year later.  During the restoration three more large movie screens were added. The Starlite is still in operation today. The Coon Rapids Drive-In was also designed by architect Jacob Liebenberg. Established in 1961, the theatre was located next to the railroad tracks in Coon Rapids, Minnesota. It ceased operations in 1985. Records indicate there was one screen, and the theatre’s car capacity was 900. A fun fact about this theater is that it had in-car heaters available for guests!

MNHS has several photographs of these early drive-ins in its collection.

Drive-ins also served multiple purposes, such as religious outings. Here is a photograph from Gull Drive-in in Brainerd, Minnesota. 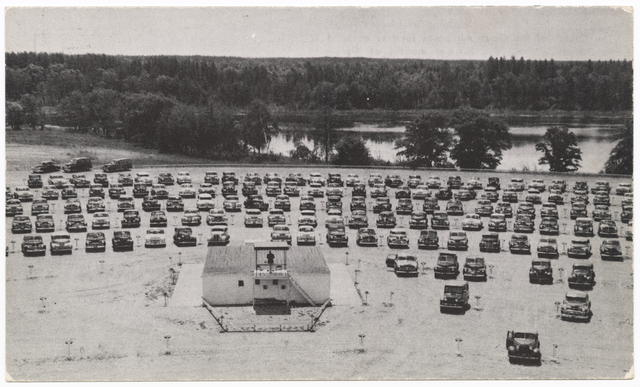 The popularity of drive-ins waned during the 1970s; due, in part, to demand for residential development, rising property values, and new video recording technology such as VCRs. This hasn’t prevented historians from pouring over various documentary and visual materials associated with indoor and outdoor cinema palaces. A section of the MNHS Press book, Twin Cities Picture Show: A Century of Moviegoing, by Dave Kenney is devoted to Twin Cities’ drive-ins. The book contains 100 b&w photographs. Although the height of drive-in attendance peaked decades ago, could a revival soon be in the offing? 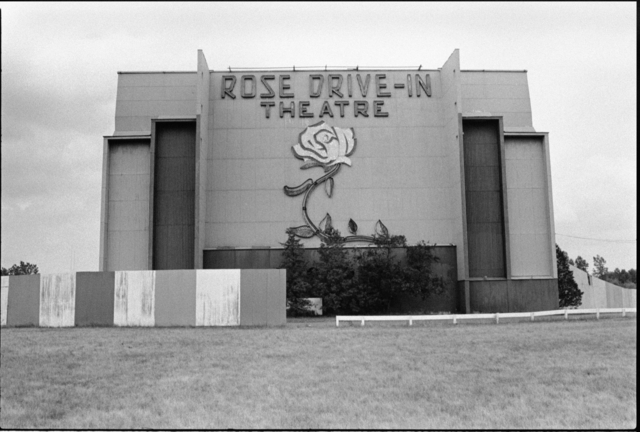 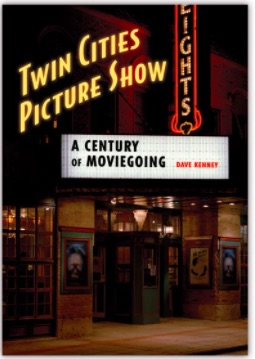 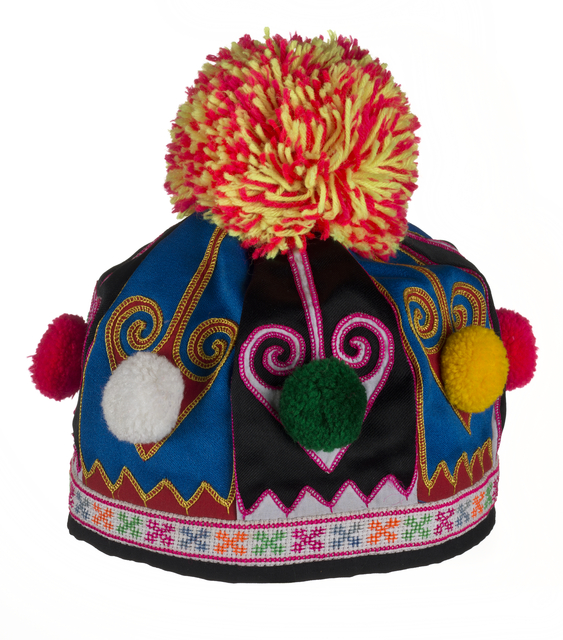 This traditional Hmong children's hat was displayed at Hmong Handwork in Saint Paul by vendor Yao Lao between 1981 - 1989.
I love the addition of a pom-pom on top!
#curatorbattle #besthat 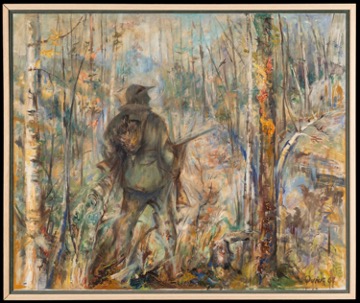 As a Spring intern for MNHS, the past few months have been a whirlwind.  Despite finishing remotely, this semester has been a wonderful experience.   Asked to write about something important to me during this semester, many things come to mind.  The amazing artifacts, the stories behind them, but most of all, I was inspired by how much the community at MNHS believes in helping interns grow.  In addition to learning specific job skills, MNHS offers learning opportunities, teaches employment skills, networking, and truly strives to give the best education possible to interns.  Thanks to all of this, this internship became more than just a checkmark on a transcript for me.

Before lockdown, I interviewed the Curator of MNHS’s Art department.  The 20-minute interview turned into a 75-minute one.   I learned so much about the dynamics of art in a history museum setting, how the department collects and displays art, even received advice on various research topics for my graduate courses, and then had an amazing tour of the art works in the collection.  During this tour we came across a newer acquisition, a painting titled “The Hunter” by local Minnesota artist Birney Quick.  The painting inspired me so much that I’ve decided to focus a research project next semester on Quick and his work.  This is just one example of how much my work outside of MNHS has grown thanks to my time here.  I will be forever grateful to staff who mentored me, as it has truly been a life-changing experience. 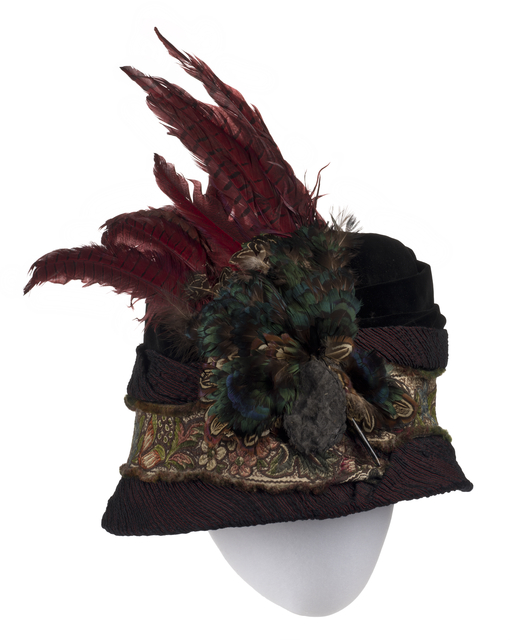 This week's challenge from the Yorkshire Museum is to share the best hat in our Collection. I don't know if this is the best, because we have so many good ones, but it's pretty great.
It's a women's oversized hat with high crown and feathers adorning the front worn by Mabel Kellogg of Saint Paul, circa 1905. 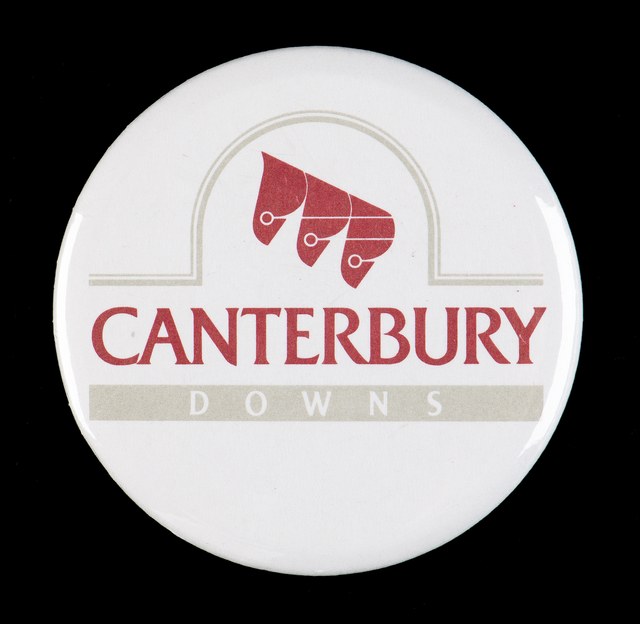 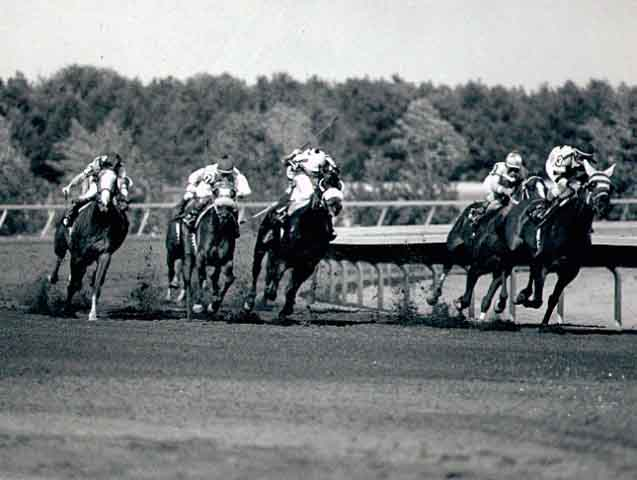 Edge of the Boreal Forest 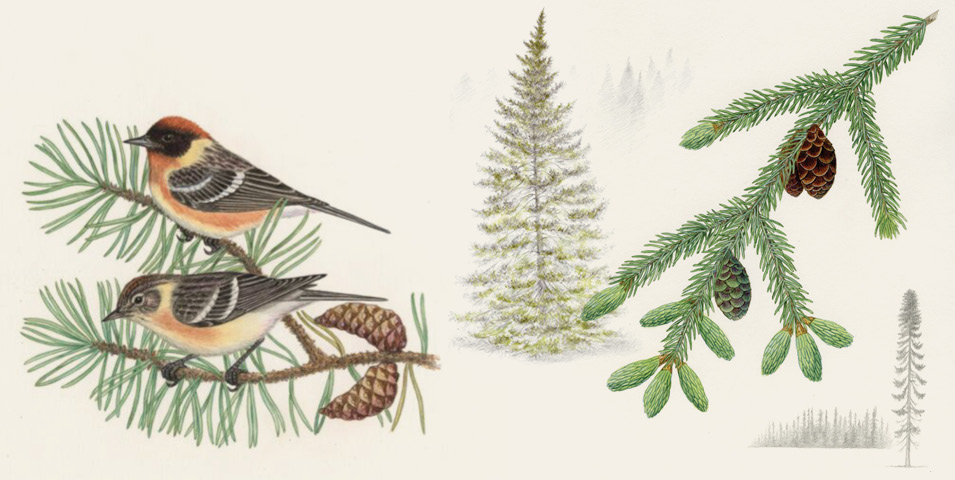 Be sure to take a virtual visit to the current exhibit at the James J. Hill House, Art From the Edge of the Boreal Forest: Reflecting Biodiversity.
It's a great day for some nature and botanical art. Enjoy! 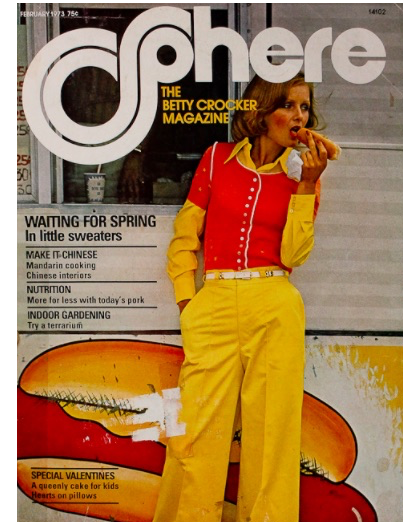 This week's challenge from the Yorkshire Museum to the world-wide museum community is to post the "sassiest" item from their collection.
I'm not sure that this is the sassiest, but it is definitely sassy. It is the cover of the short-lived Betty Crocker magazine called "Sphere" from February, 1973. 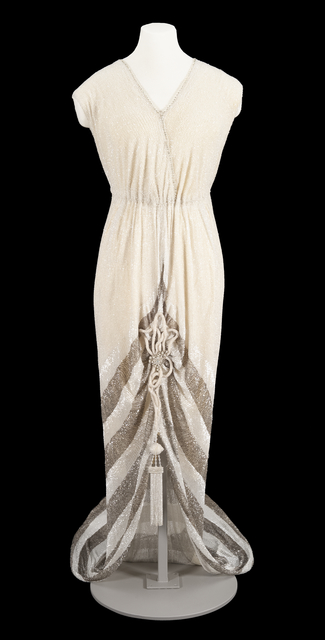 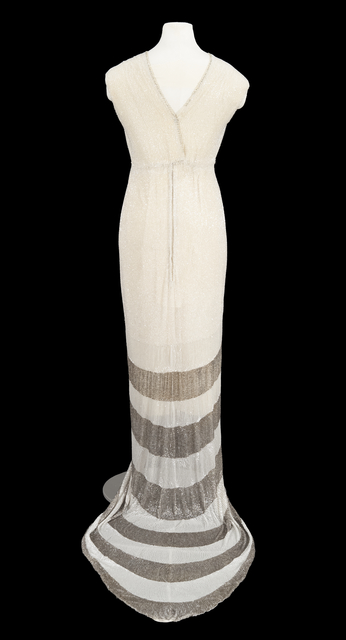 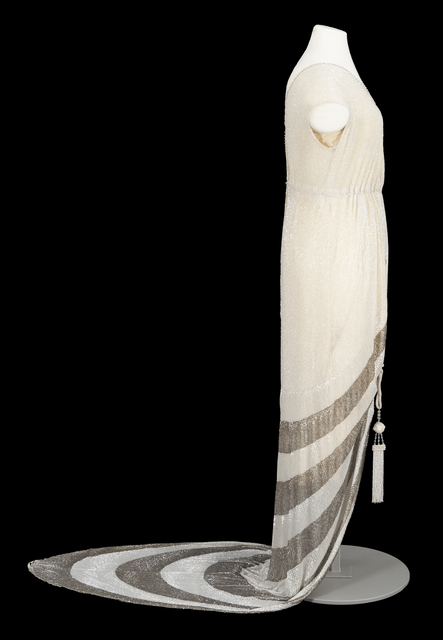 This gown is a real show-stopper. It’s got everything: elegance, texture, and it happens to be one of the biggest mysteries in the history of the Minnesota Historical Society collections.

Produced by international designer and master couturier Paul Poiret (1879-1944) of Paris, this net gown is entirely covered in crystal beads. The gather at the front is held with a knotted rope ornament and tassel, while the lower skirt consists of cylindrical white and gray beads in alternating stripes, forming a train at the back. Luckily, there is a finger loop at the end of the train allowing the wearer to easily lift it off the floor when necessary. Originally, it would have had a matching belt to cover the waist seam but unfortunately, the belt is not in the MNHS collection.

This gown is so spectacular that in 1982 it was loaned to the  Metropolitan Museum of Art (better known as the Met) for their exhibition “La Belle Epoque”. While on display, it caught the attention of renowned artist and designer Erté, (born Romain de Tirtoff, 1892-1990) whose work is famous for its art deco designs and features in Harper’s Bazaar magazine. Erté recognized the dress as one of his own designs from when he worked for Poiret in 1913.

Thus, MNHS staff gained information not often recorded for costume pieces of this vintage: a designer, a creator and a creation date. But two essential pieces of information were missing: who wore this magnificent gown and how did it come to MNHS?

At some point, the gown was separated from its accession information, leaving staff no way to identify who used it, where it was used, or who donated it. This unfortunate occurrence is something many museums deal with, especially organizations like MNHS that have been collecting for longer than there have been professional standards for maintaining documentation. Before computers and standardization, an item could more easily be separated from its provenance or other identifiers. Such was the case here.

Over the years, extensive research has been done to answer these questions. Prior to being sent to the Met, staff combed through records of any possible donations the gown could have been associated with. During the Met exhibition there were also several newspaper articles about the MNHS “Mystery Dress”, asking for anyone with more information to come forward. Most recently, staff have searched the Minnesota Digital Newspaper Hub for any reference of a gown this spectacular, as it wasn’t uncommon for descriptions of formalwear to be included in articles about prominent social events. But every search comes up short.

Without answers, staff are left to theorize about the gown’s owner. It is possible the dress was only worn abroad and never graced the local social scene. While the sheer net and high front hem would have been considered fashion forward in Paris, it would have been quite risque for Minnesota. Or maybe it was purchased and never worn, considering that the gown is both delicate and quite heavy due to the beading. Whatever the case, curatorial staff continue searching for answers. In the meantime, the story of this fabulous gown remains a mystery. 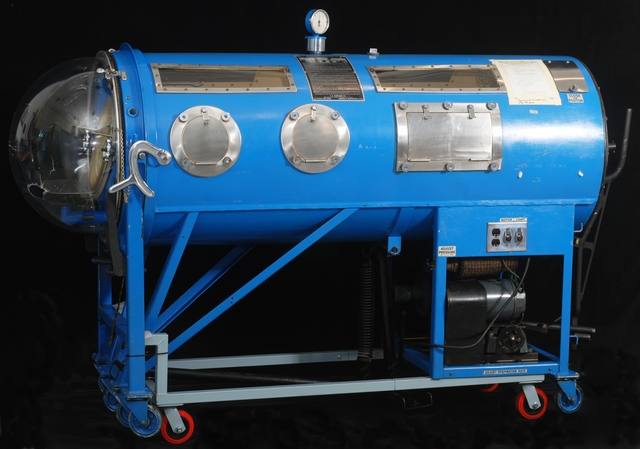 Recently there appeared a news article about how a visit by researchers to an iron lung in a museum's collection helped them think about ventilators in a new way.
This is our juvenile size iron lung used at Sister Kenny Institute, Minneapolis, to treat victims of polio. 1953. 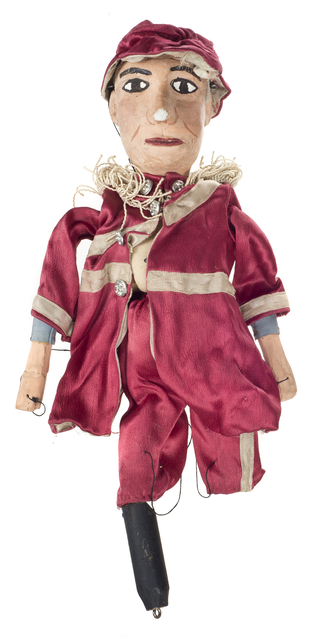 Perhaps you've heard about the challenge issued by a U.K. museum to other museums worldwide to share the creepiest items from their collection? We can't resist a challenge and love our creepy things!
Let’s start with our marionette. It’s cursed! According to the donor, this marionette was responsible for accidents, disease and death wherever it went, but when MNHS tried to reach out to him for more information, he was nowhere to be found…
The marionette is from the 1890s. His cabinet is always locked.