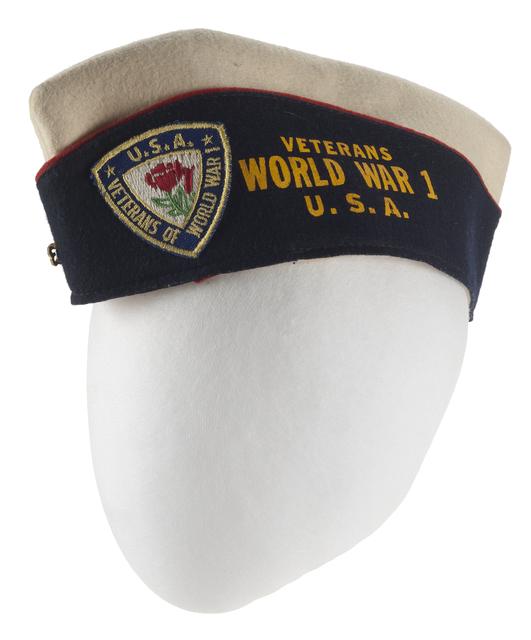 This is an U.S. Army Veteran's Overseas Cap from 1919. Happy Veteran's Day observed - thanks to all who served then and now! 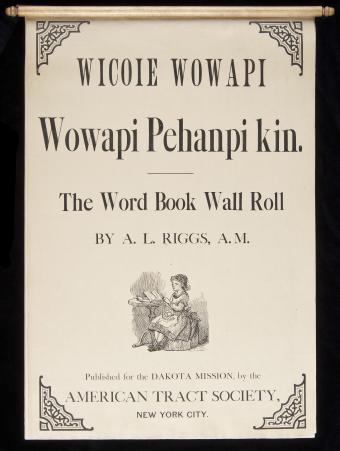 This word book was made by missionary Alfred L. Riggs in the 1880s. It was a tool used in the classroom to teach the written Dakota language to native speakers.

Pins like this were given to men who were exempt from the military draft. This identifier, which could be worn on the lapel to indicate exempt status, became necessary in the face of the perception that draft evasion was common among able-bodied men. This angered many people, some of whom felt that it was unfair that their own relatives were risking their lives while others stayed home. These men were perceived as "slackers," and "slacker raids" were conducted to rectify their evasion of the draft. However, many men were legally exempt from the draft for a variety of reasons. These men could wear pins like this one to avoid judgement or harassment in public. One common exemption one could claim was non-citizenship or alien status, which, combined with anti-immigrant sentiments, heightened the negative perceptions of immigrants who were not at war. Other exemptions included men with dependant wives and children, and those who worked in jobs that were considered vital or that supported the war effort, like farmers and welders. 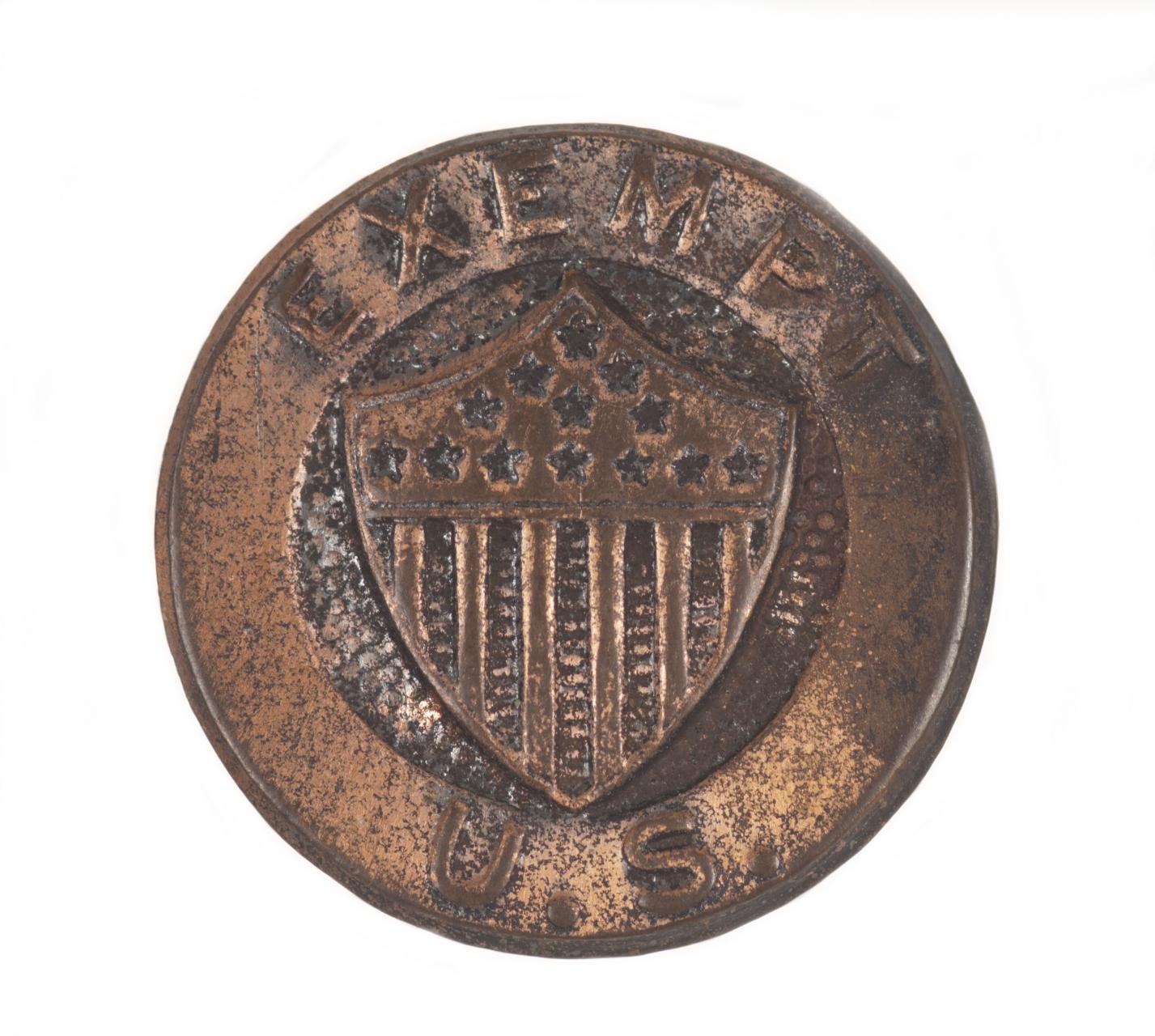 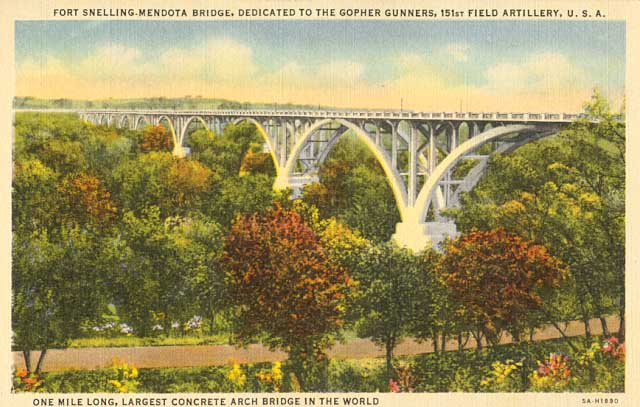 In 1926 the old Mendota bridge to Fort Snelling opened and was dedicated to the men of the 151st Field Artillery who had been killed in World War I.

Remember there's only a few days left to see WW1 America, which closes on November 11! 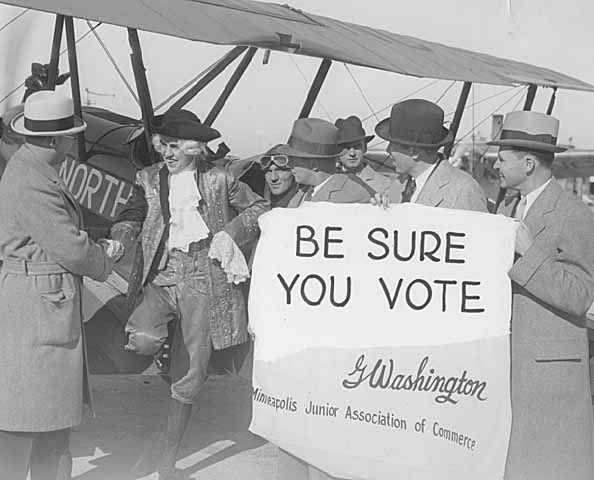 Today is election day around the country and in Minnesota! This photo is of the Minneapolis Junior Chamber of Commerce sponsoring a "Get Out the Vote" campaign in 1932. Note "George Washington" standing by an airplane shaking hands and urging people to vote.

In this letter to his mother, Corporal Maurice E. Masterson, resident of Barnesville, Minnesota, describes his journey to and arrival in France and his feelings about the war in his initial days in the military. He tells his mother that he is glad to have come because the people of France are suffering, and need the help of U.S. troops. He also mentions some people he has met, and tells her not to expect to many letters but to write him as much as possible, and also to send candy from home.

This letter is one of several included as a copy in Corporal Masterson's Gold Star Roll file. He was killed by an enemy shell on November 1st, 1918. 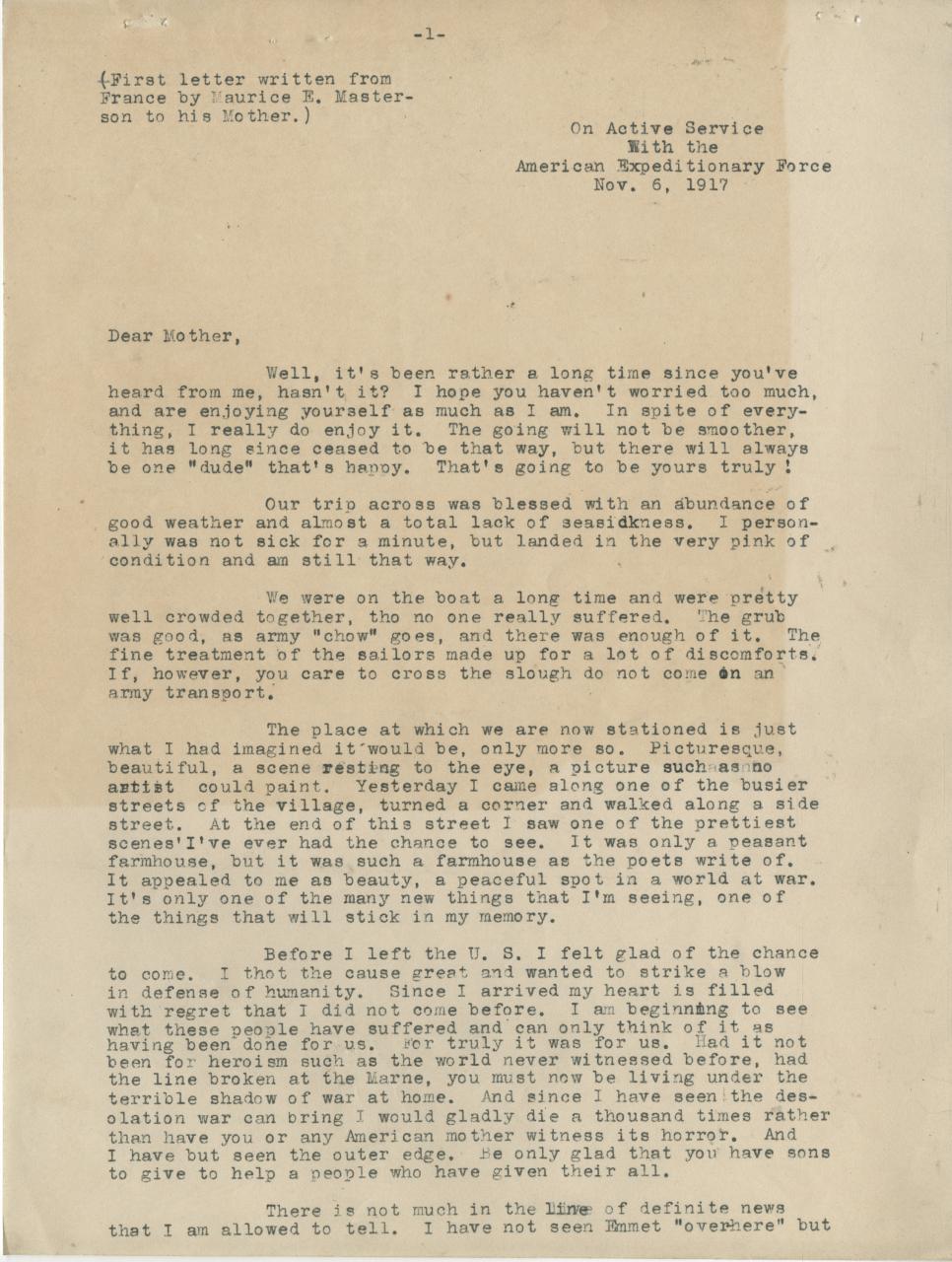 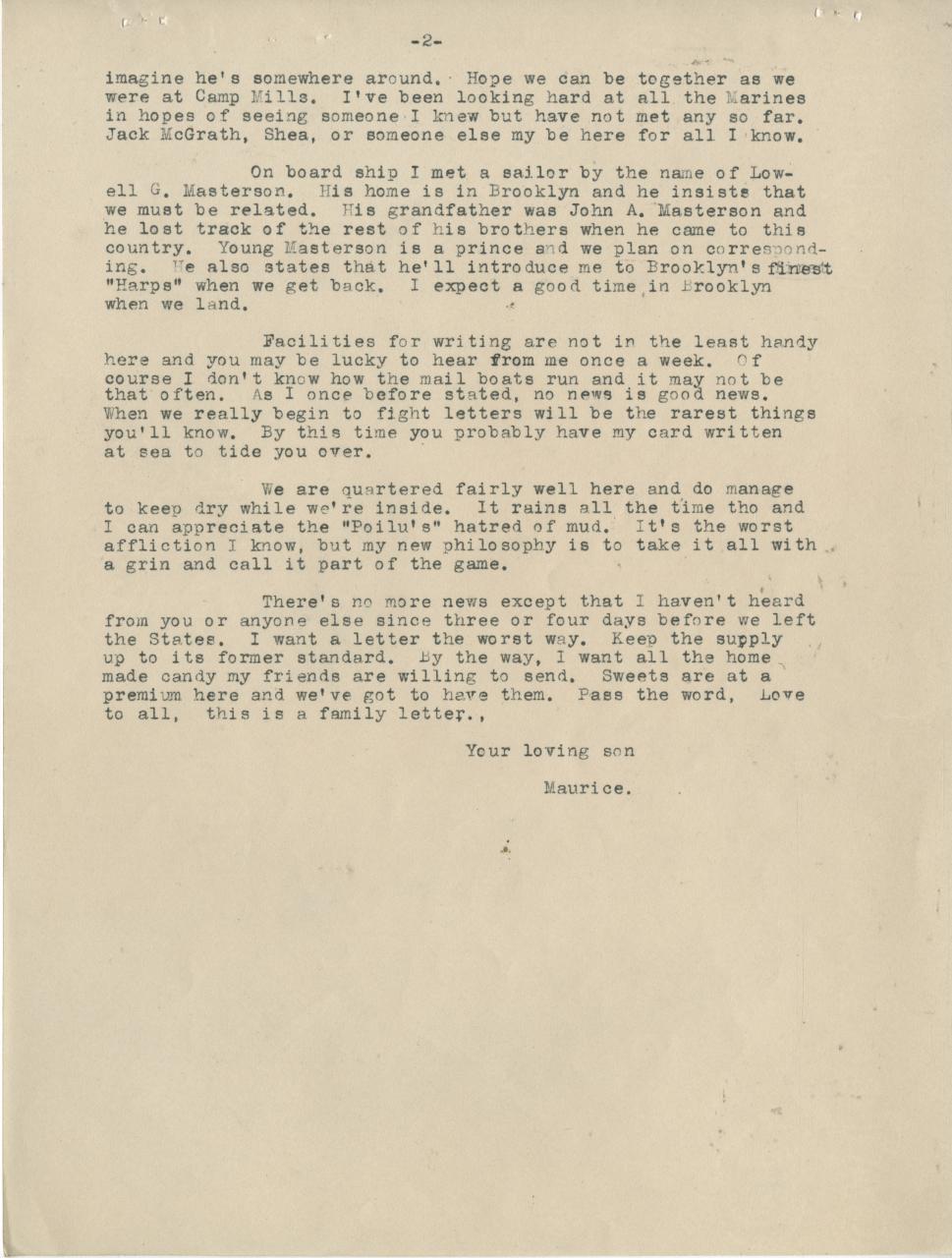 On Active Service
With the
American Expeditionary Force
Nov. 6, 1917
Dear Mother,
Well, it's been rather a long time since you've heard from me, hasn't it? I hope you haven't worried too much, and are enjoying yourself as much as I am. In spite of everything, I really do enjoy it. The going will not be smoother, it has long since ceased to be that way, but there will always be one "dude" that's happy. That's going to be yours truly.

Our trio across was blessed with an abundance of good weather and almost a total lack of seasickness. I personally was not sick for a minute, but landed in the very pink of condition and am still that way.

[...] The place at which we are now stationed is just what I had imagined it would be, only more so. Picturesque, beautiful, a scene resting to the eye, a picture such as no artist could paint. Yesterday I came along one of the busier streets of the village, turned a corner and walked along a side street. At the end of this street I saw one of the prettiest scenes I've ever had the chance to see. It was only a peasant farmhouse, but it was such a farmhouse as the poets write of. It appealed to me as beauty, a peaceful spot in a world at war. It's only one of the many new things that I'm seeing, one of the things that will stick in my memory.

Before I left the U. S. I felt glad of the chance to come. I thot the cause great and wanted to strike a blow in defense of humanity. Since I arrived my heart is filled with regret that I did not come before. [...] And since I have seen the desolation war can bring would gladly die a thousand times rather than have you or any American mother witness its horror. And I have but seen the outer edge. Be only glad that you have sons to give to help a people who have given their all.

[...] I want a letter the worst way. Keep the supply up to its former standard. By the way, I want all the home made candy my friends are willing to send. Sweets are at a premium here and we've got to have them. Pass the word, Love to all, this is a family letter.,
Your loving son
Maurice. 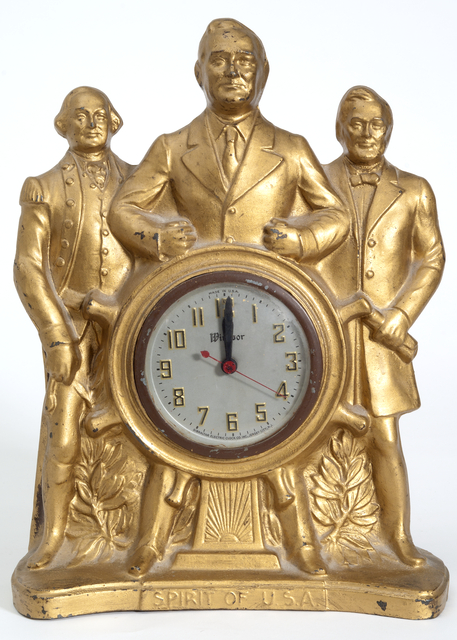 Did you remember to set your clocks back this weekend? This cast metal electric clock features likenesses of George Washington, Franklin D. Roosevelt, and Abraham Lincoln standing around a ship's wheel. Ca. 1940.

Andrew H. Halseth was a U.S. Navy Gun Captain from Bemidji, Minnesota. He died on this date in 1917 after falling out of his hammock on board the U.S. De Kalb and sustaining brain injuries. Halseth's Gold Star Roll file includes a photograph, newspapers clippings, letters from the Navy regarding his death, and copies of his letters. The Base Chaplain in Nazaire, France, sent Halseth's father a letter describing the funeral, expressing how highly everyone viewed him. His body was eventually sent back to his family in the U.S. after several months of delays. 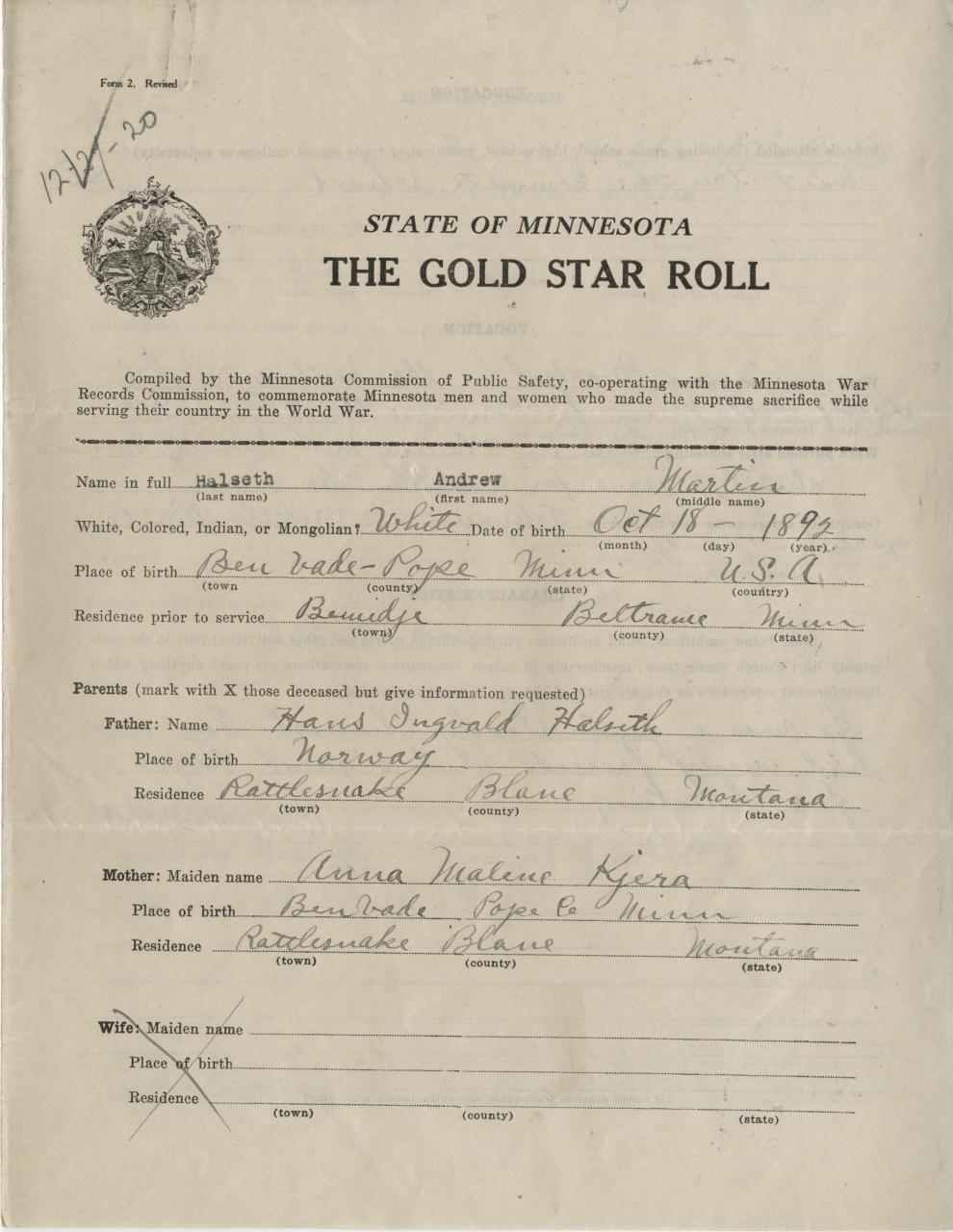 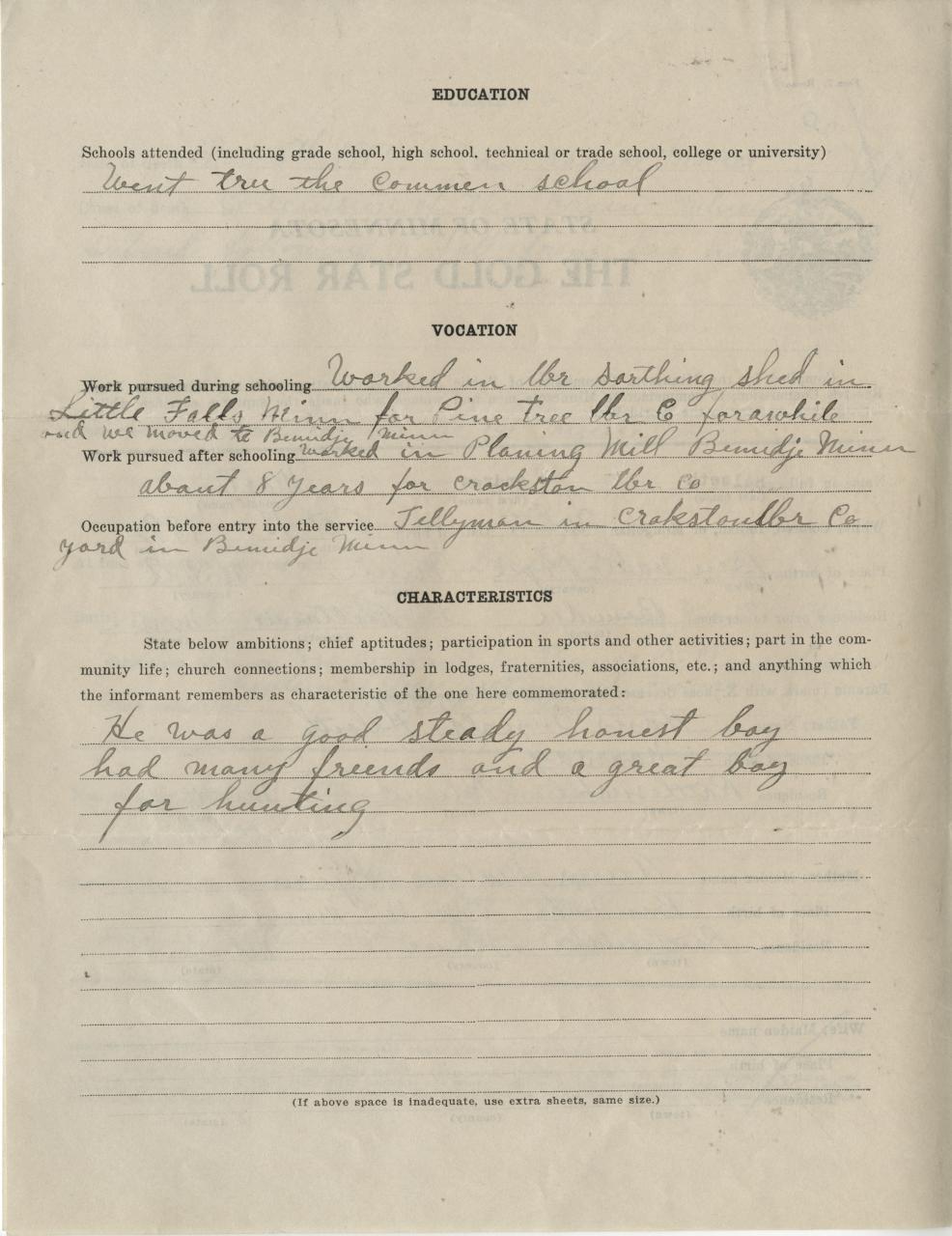 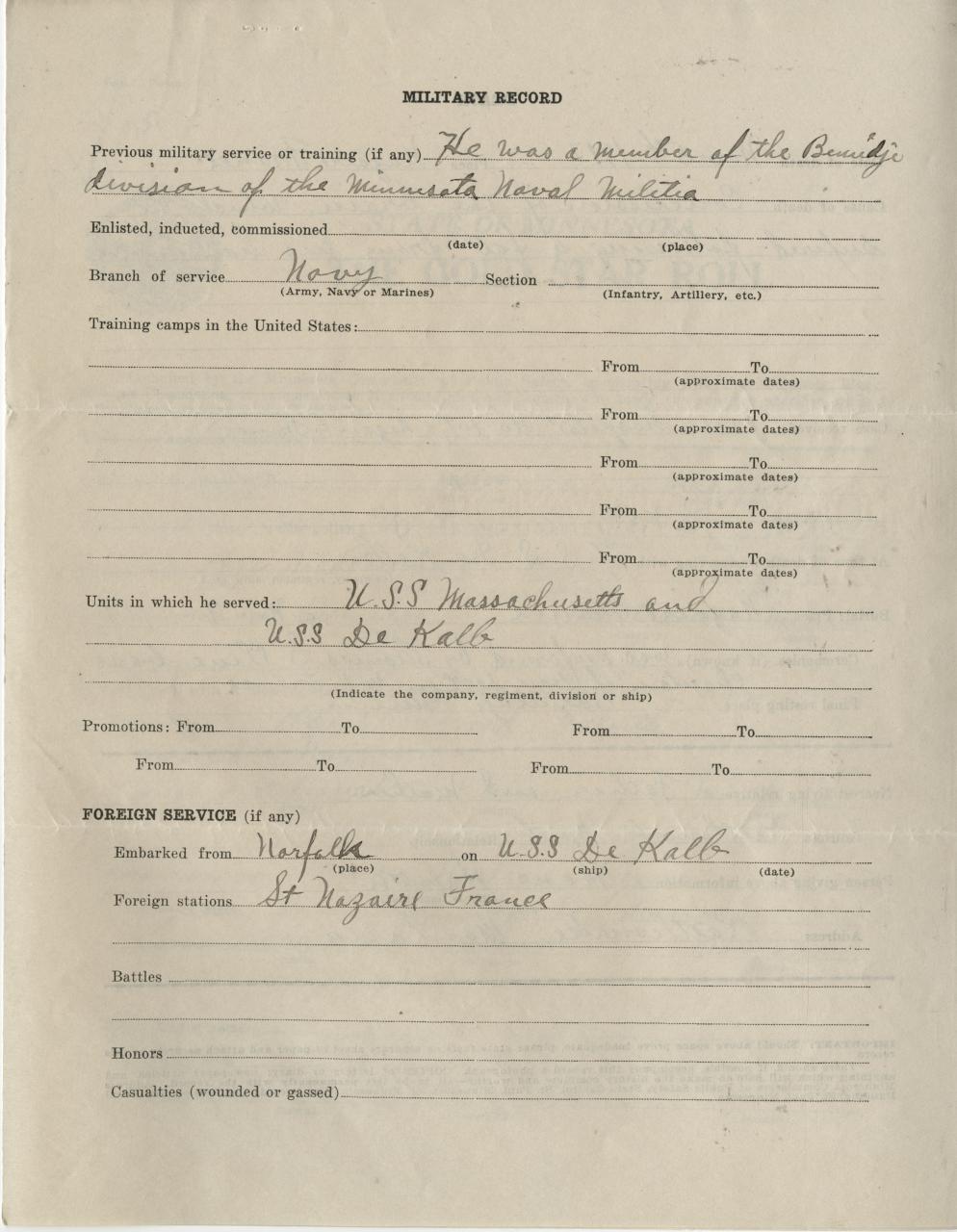 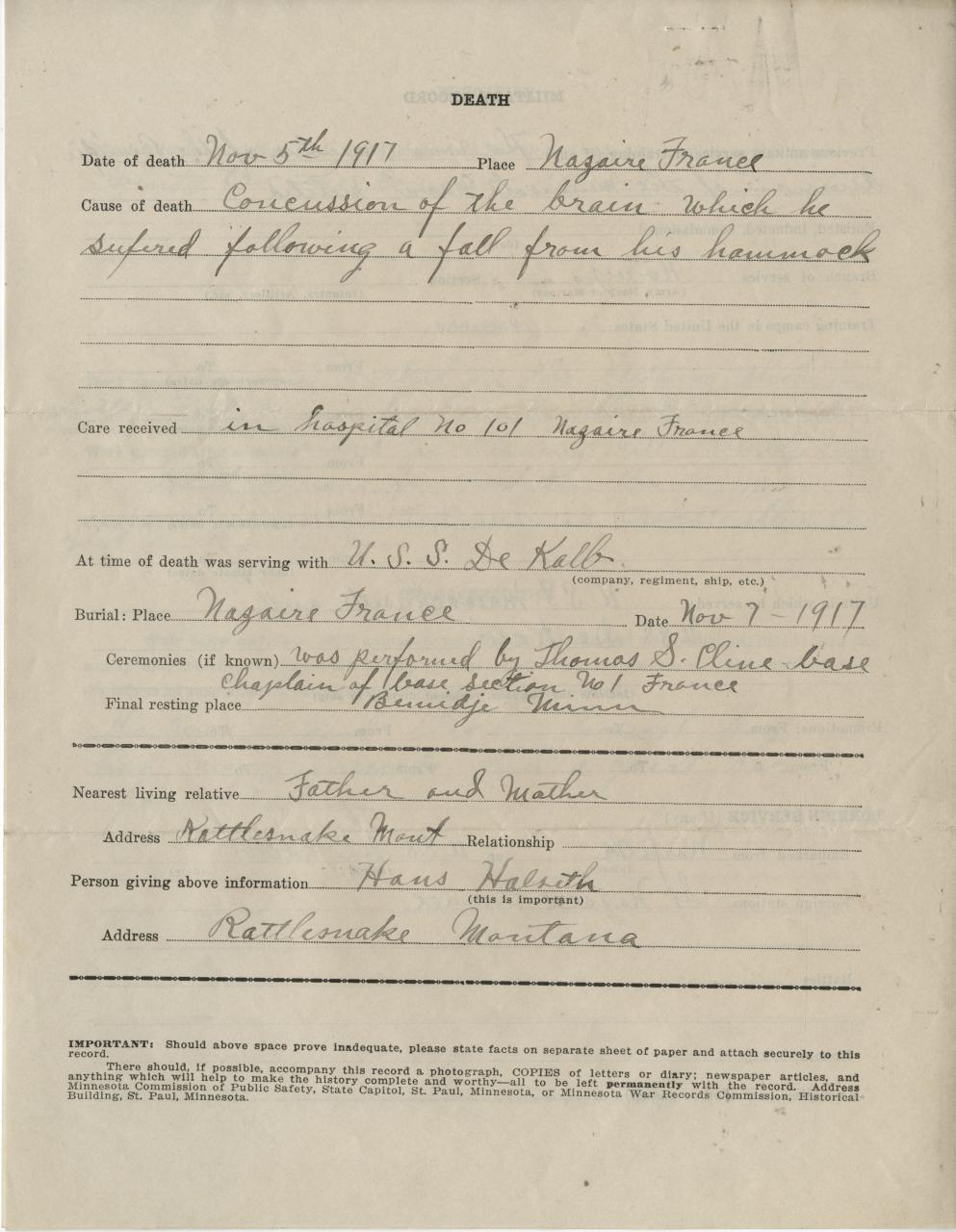 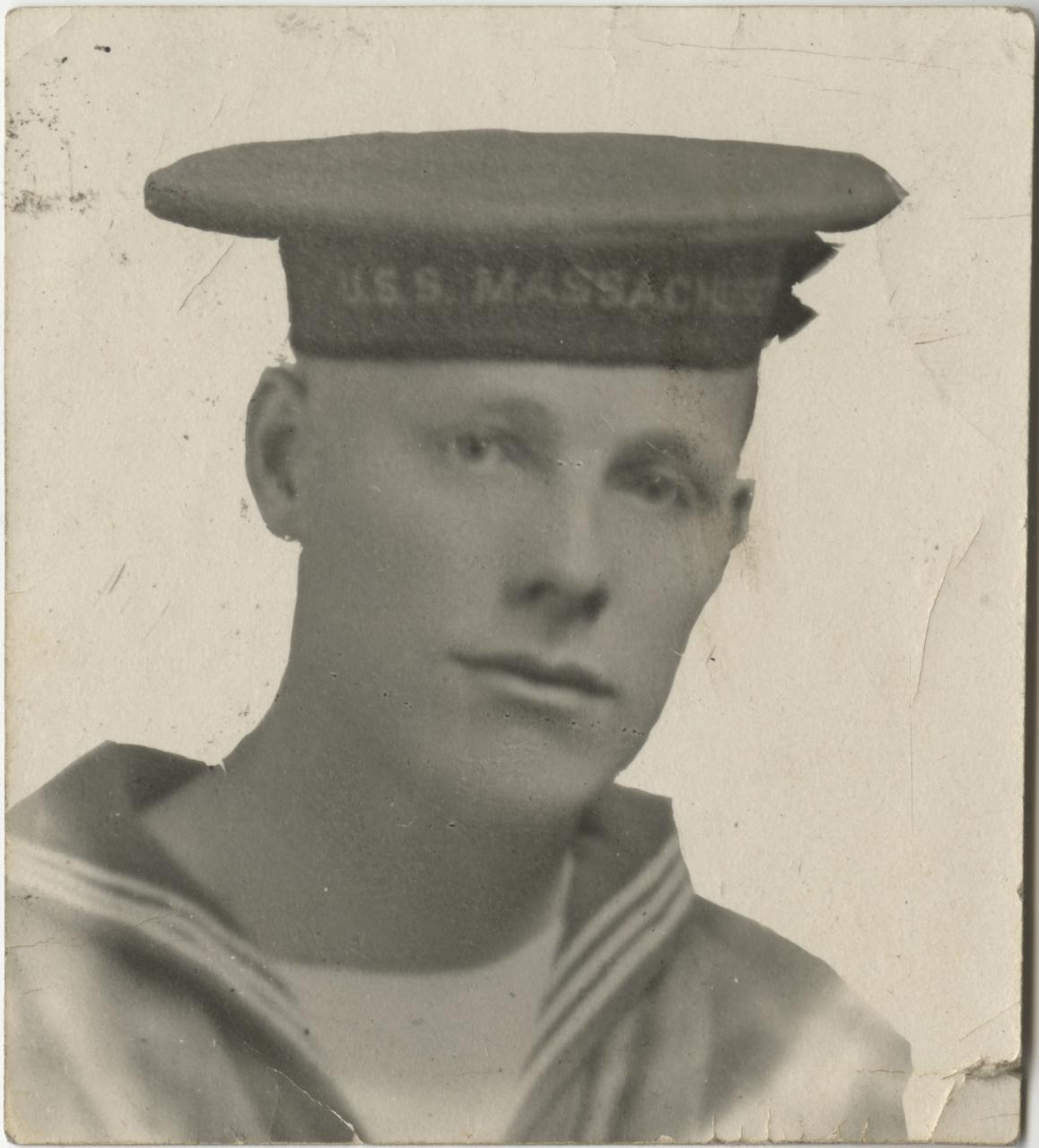 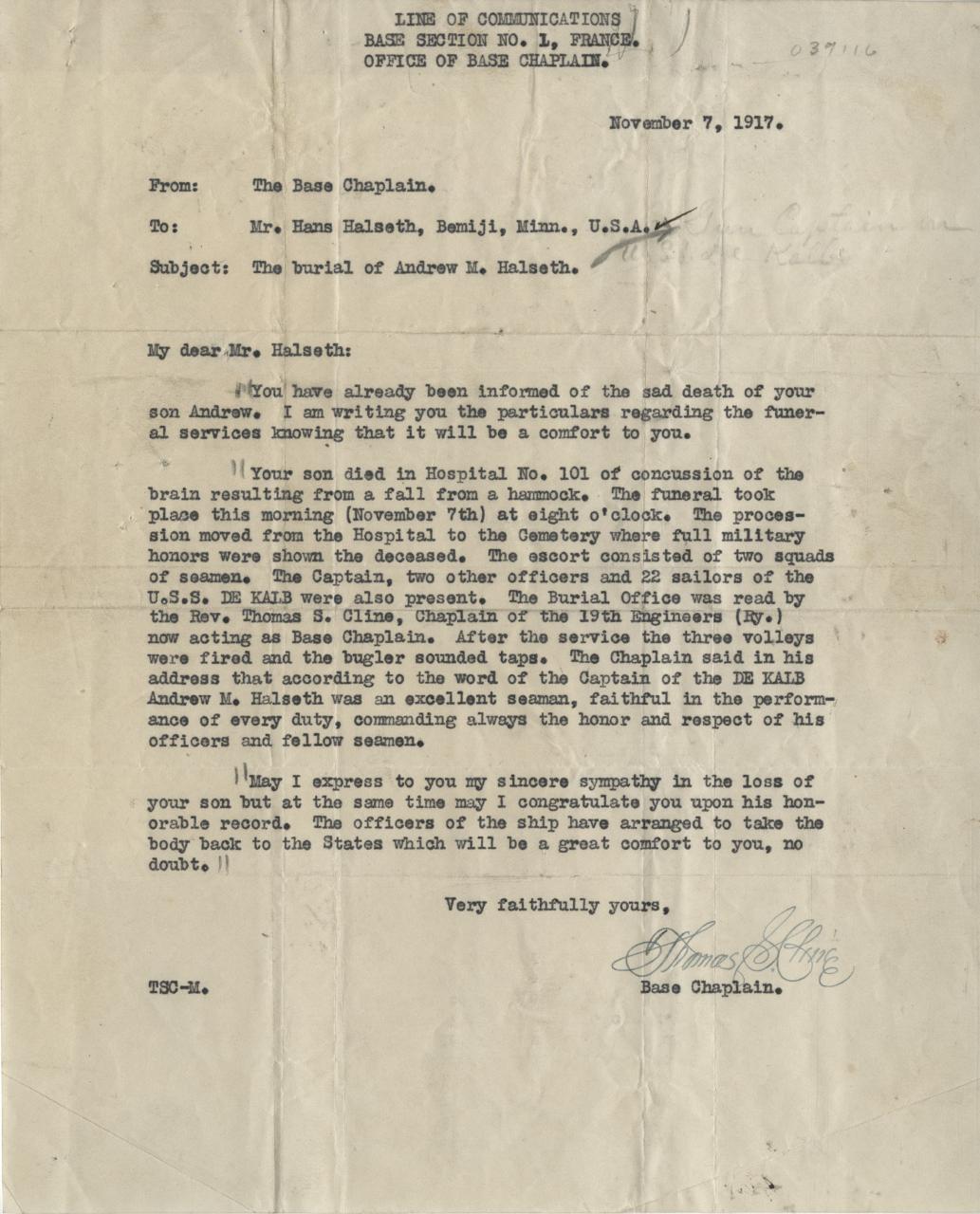 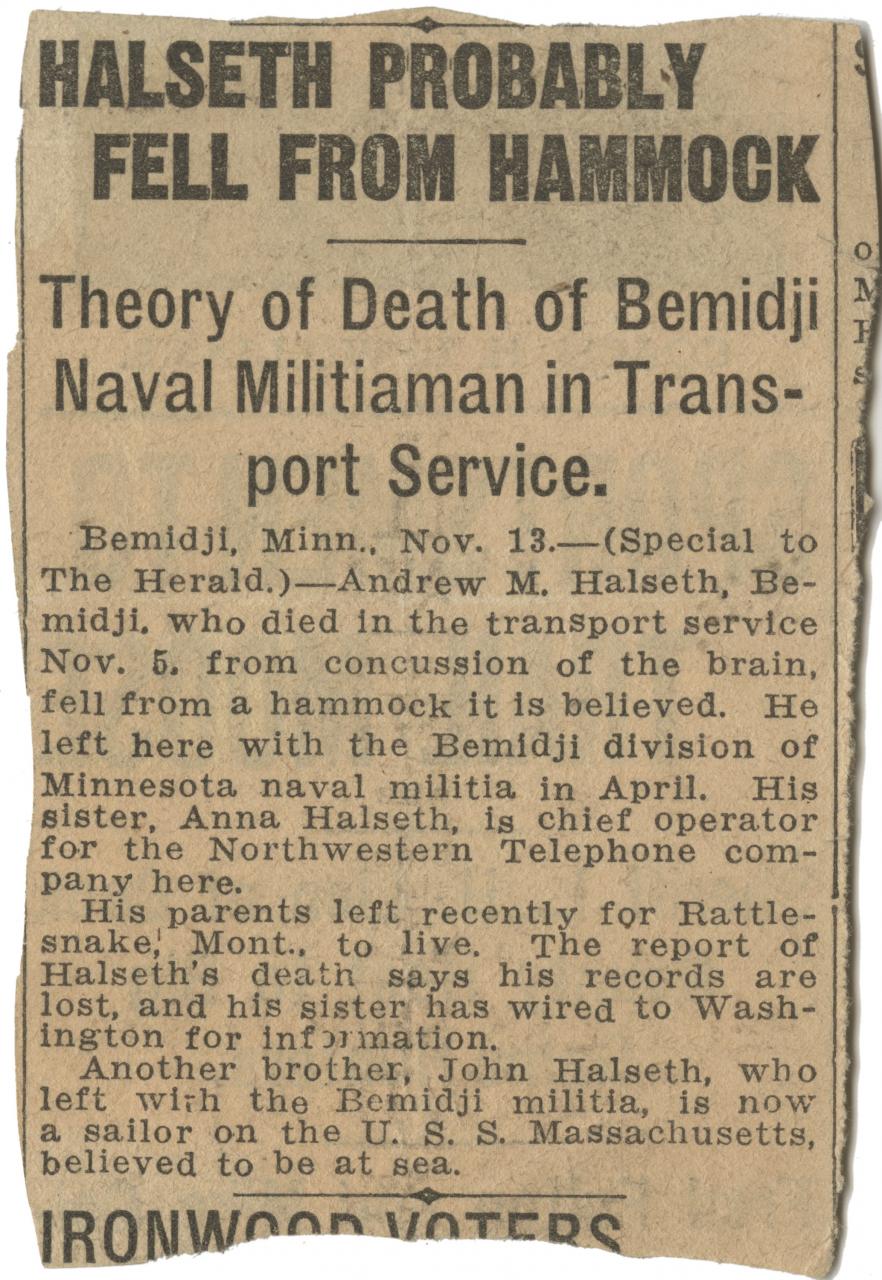 November 7, 1917.
[...] My dear Mr. Halseth:
You have already been informed of the sad death of your son Andrew. I am writing you the particulars regarding the funeral services knowing that it will be a comfort to you. You son died in Hospital No. 101 of concussion of the brain resulting from a fall from a hammock. The funeral took place this morning (November 7th) at eight o'clock. The procession moved from the Hospital to the Cemetary where full military honors were shown the deceased. The escort consisted of two squads of seamen. The Captain, two other officers and 22 sailors of the U.S.S. DE KALB were also present. The Burial Office was read by the Rev. Thomas S. Cline, Chaplain of the 19th Engineers (Ry.) now acting as Base Chaplain. After the service the three volleys were fired and the bugler sounded taps. The Chaplain said in his address that according to the word of the Captain of the DE KALB Andrew M.Halseth was an excellent seaman, faithful in the performance of every duty, commanding always the honor and respect of his officers and fellow seamen. May I express to you my sincere sympathy in the loss of your son but at the same time may I congratulate you upon his honorable record. The officers of the ship have arranged to take the body back to the United States which will be a great comfort to you, no doubt.
Very faithfully yours,
Thomas S. Cline
Base Chaplain.