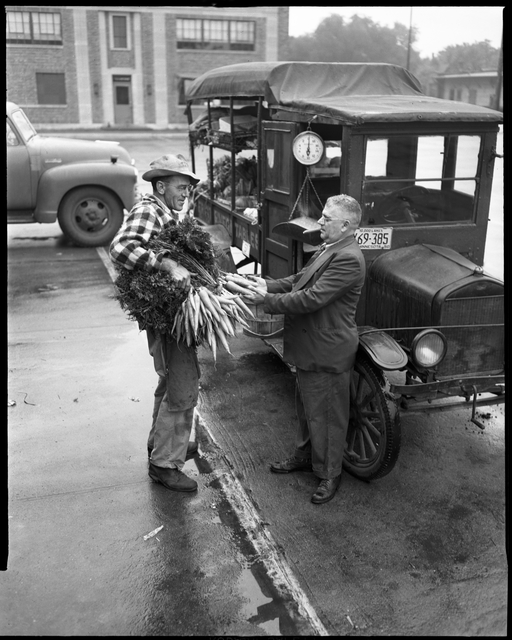 This week we want to express a big thank you to many others who keep us going in these difficult times!
This photo shows a farmer with his carrots at the Minneapolis Farmers' Market in 1950. 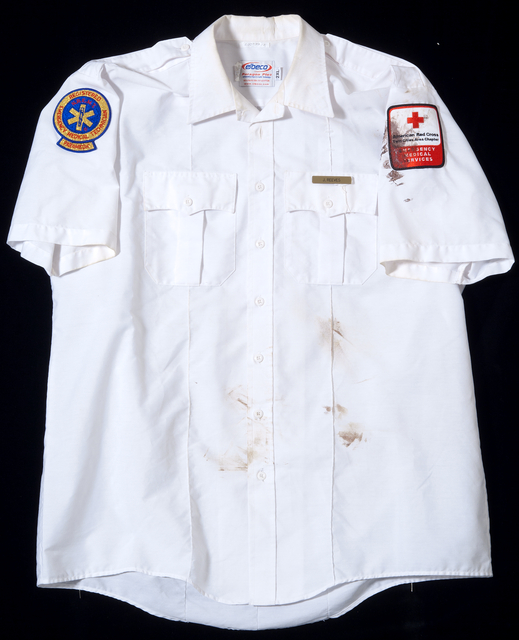 This week we share appreciation of medical workers. Thank you for all you do!
This American Red Cross paramedic uniform shirt was worn by a first responder to the collapse of Minneapolis I-35W bridge on 08/01/2007. 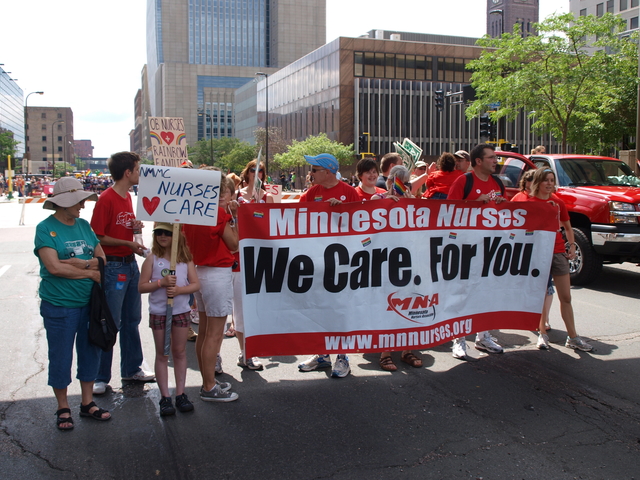 This week we share appreciation of medical workers. Thank you for all you do!
This photo shows a group of Minnesota nurses marching in the Pride parade in 2010.  It forms part of the Pride celebrations series by photographer Randy Stern. 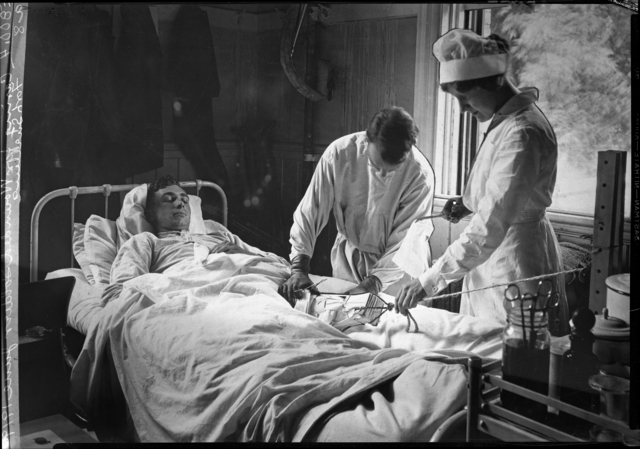 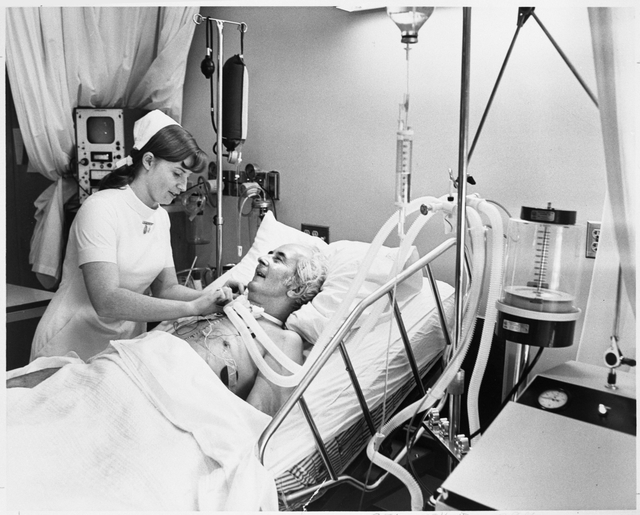 This week we will share appreciation of medical workers. Thank you for all you do!
This photo shows a nurse and post-operative open-heart surgery patient at Northwestern Hospital in 1972. 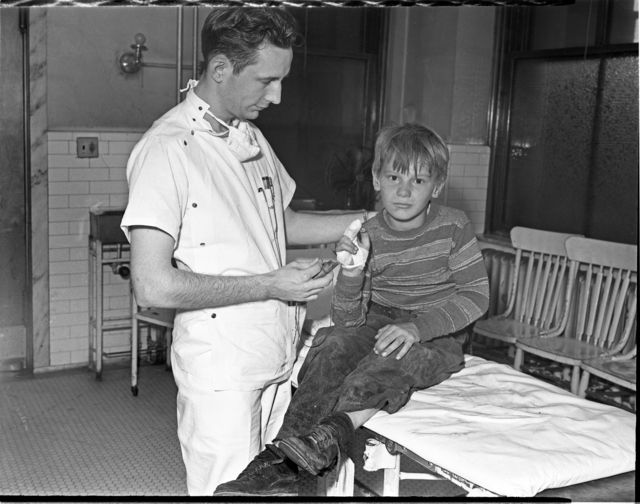 This week we will share appreciation of medical workers. Thank you for all you do!
We start in the emergency room, with this photograph of a doctor treating a young boy in Minneapolis, 1944. 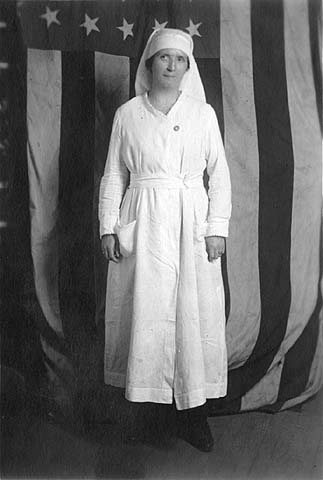 This photograph of a nurse was taken in 1918. Thank you to all the health care workers and other dedicated people working to keep us safe during these difficult times!
Please consider helping us document what is happening now by participating in our collection initiative: History is Now: COVID-19 Health Crisis. Thanks! 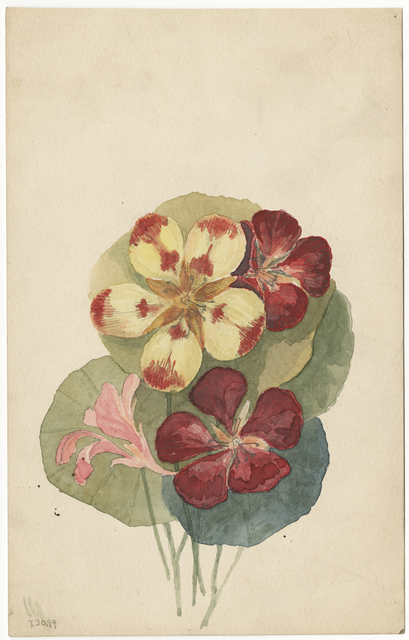 This untitled watercolor of four flowers was painted by Robert O. Sweeny in 1899.
Soon we will have flowers like this outside too! 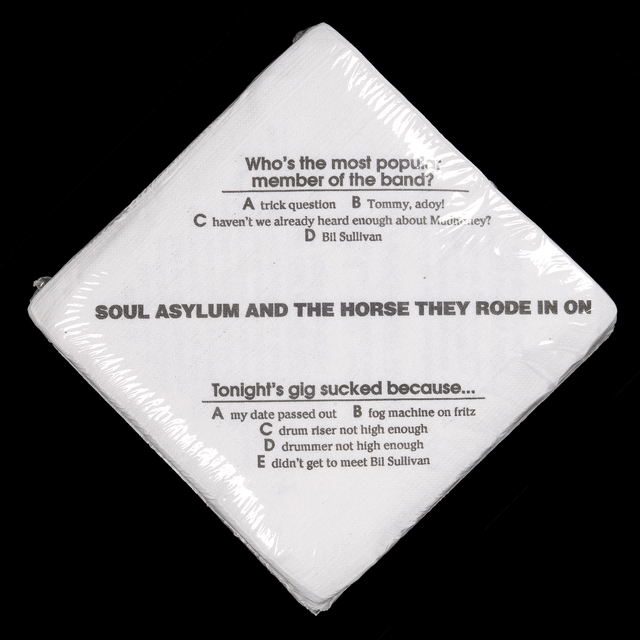 Happy April Fool's Day!
This is a package of Soul Asylum joke napkins created to promote the release of the album "And the Horse They Rode In On" in 1990. 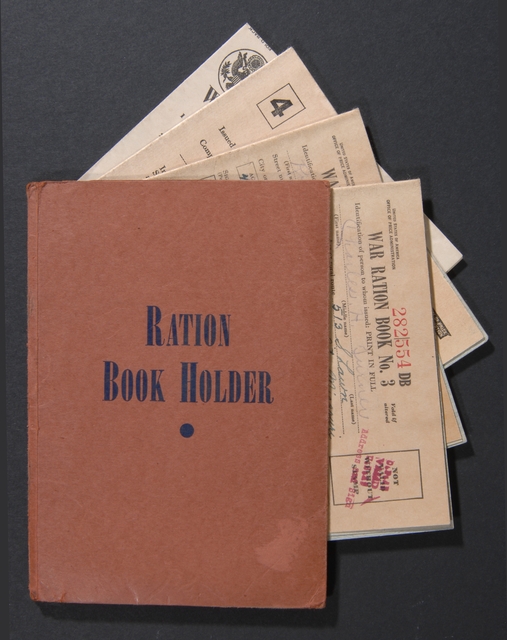 If you’ve been to a grocery store in the past few weeks, you’ve probably seen signs like the one I spotted at Target last week, limiting purchases of certain household essentials per customer. During the current high demand for household staples like milk, eggs and toilet paper, many stores have established informal rationing to allow more customers access to goods.

This is not the first time that the United States has practiced rationing home essentials to ensure access for everyone. During WWII, the need to ship food and supplies overseas for US troops and American allies affected by war meant that there were shortages on the home front. Similar to Minnesota Governor Walz’s Executive Order 20-10 banning price gouging in Minnesota, the Office of Price Administration froze the prices of goods like sugar and coffee in 1942. Each American household was issued tokens or booklets of coupons. These were presented at the store to allow the purchase of a certain amount of an item. Even if someone had enough money to purchase more of a good like sugar, the ration booklet system prevented people from purchasing more than their rationed share. This ensured a more even distribution of these goods throughout American society. Throughout the war, rationing was placed on items ranging from car tires to shoes to coffee, and even typewriters!

These booklets were produced by the United States Office of Price Administration and issued to Charles Henry and Rosanna S. Turner in 1943. Carefully written on each booklet are their heights, ages, and home addresses. This certified that the Turners had been issued these booklets. Multiple types of ration systems were used throughout the war including “uniform rationing” which allotted amounts of goods, and “point rationing” that allotted consumers a certain number of “points” that could be spent on the goods they wanted. These booklets demonstrate the “point” system. The Turners were able to use these points on canned fruits, vegetables and soups. The instructions pamphlet was also distributed with these ration booklets, explaining how to use them.

The United States is not facing shortages of household goods like in WWII, but as the booklet says, “A Fair Share For All” is a message we can all rally behind. 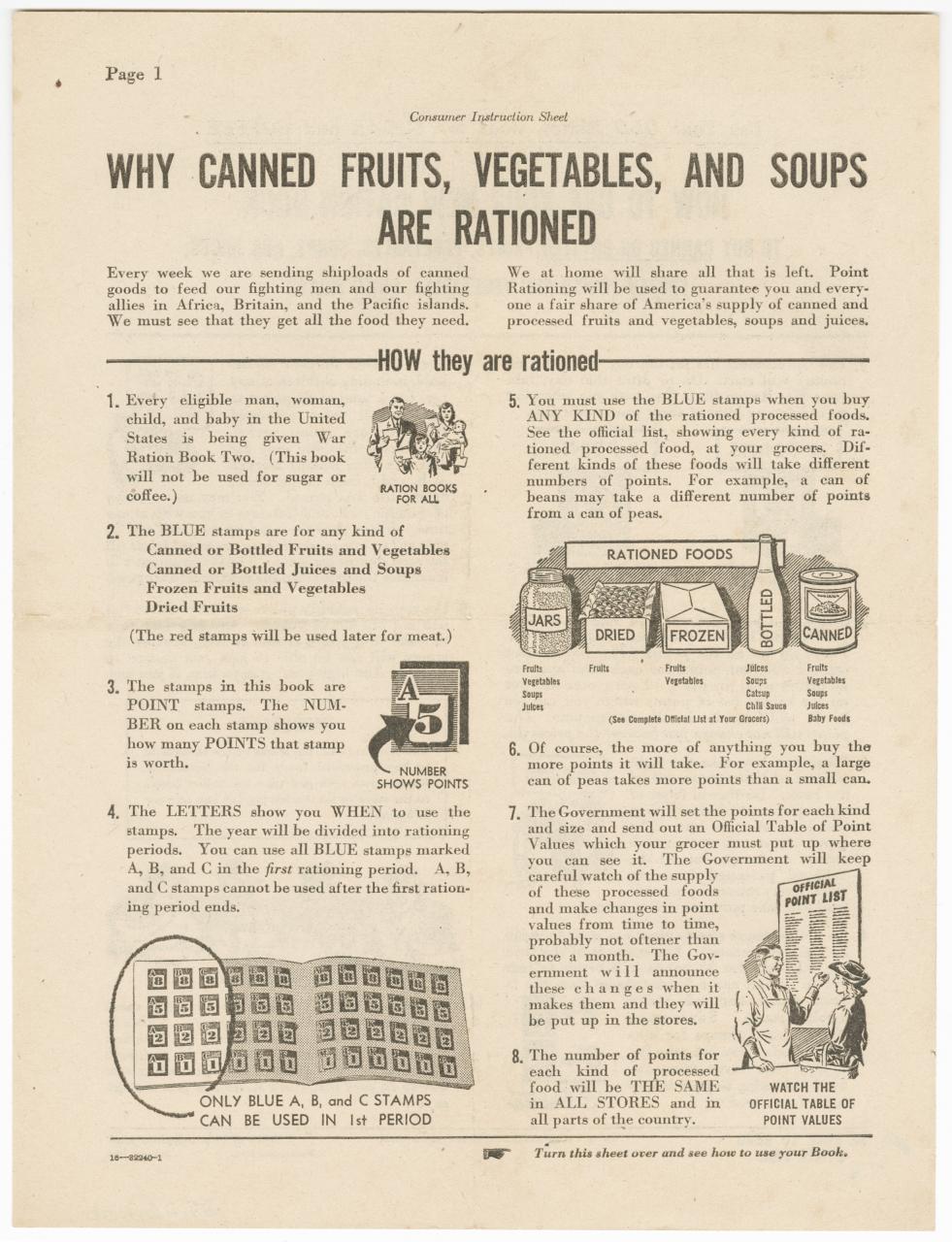 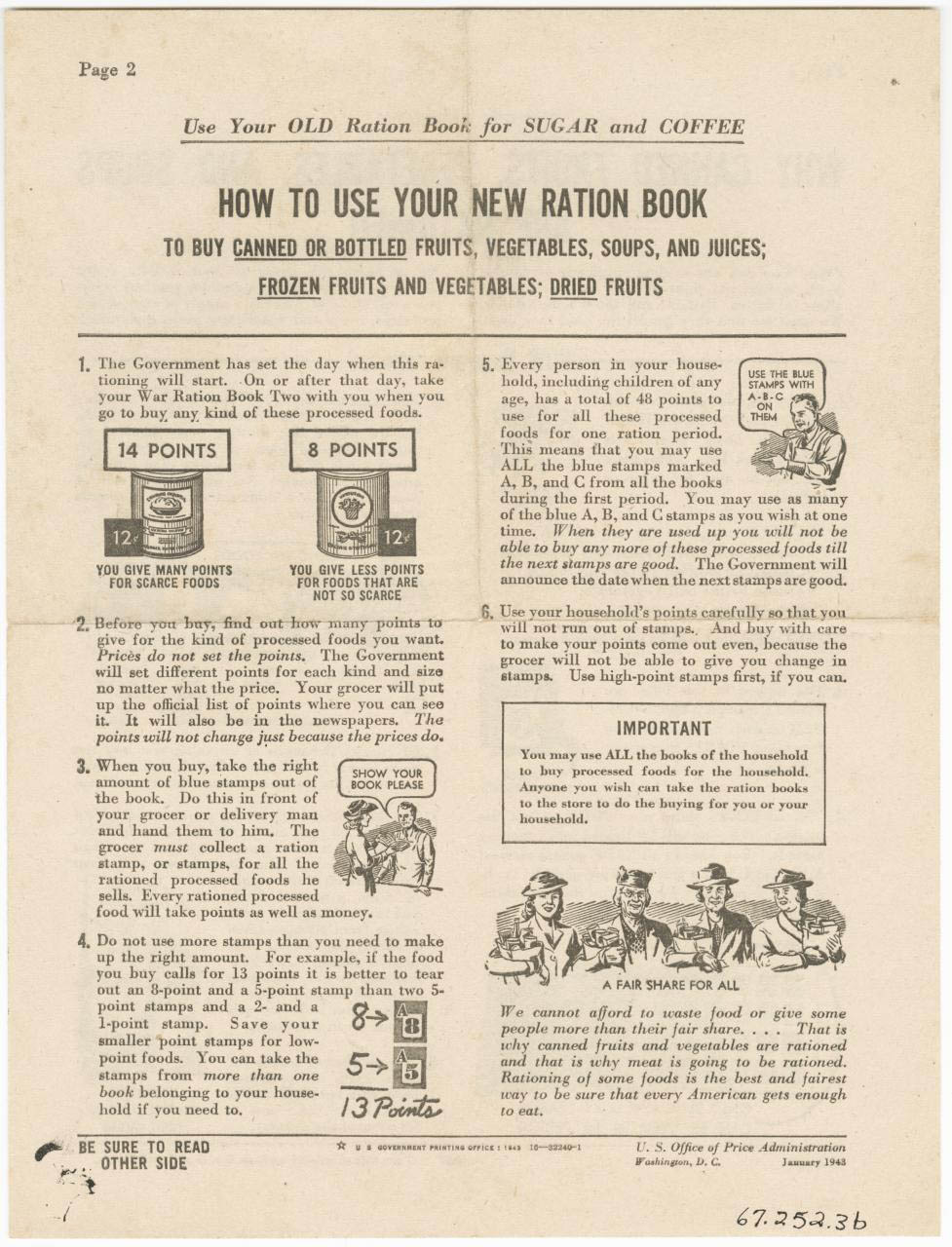 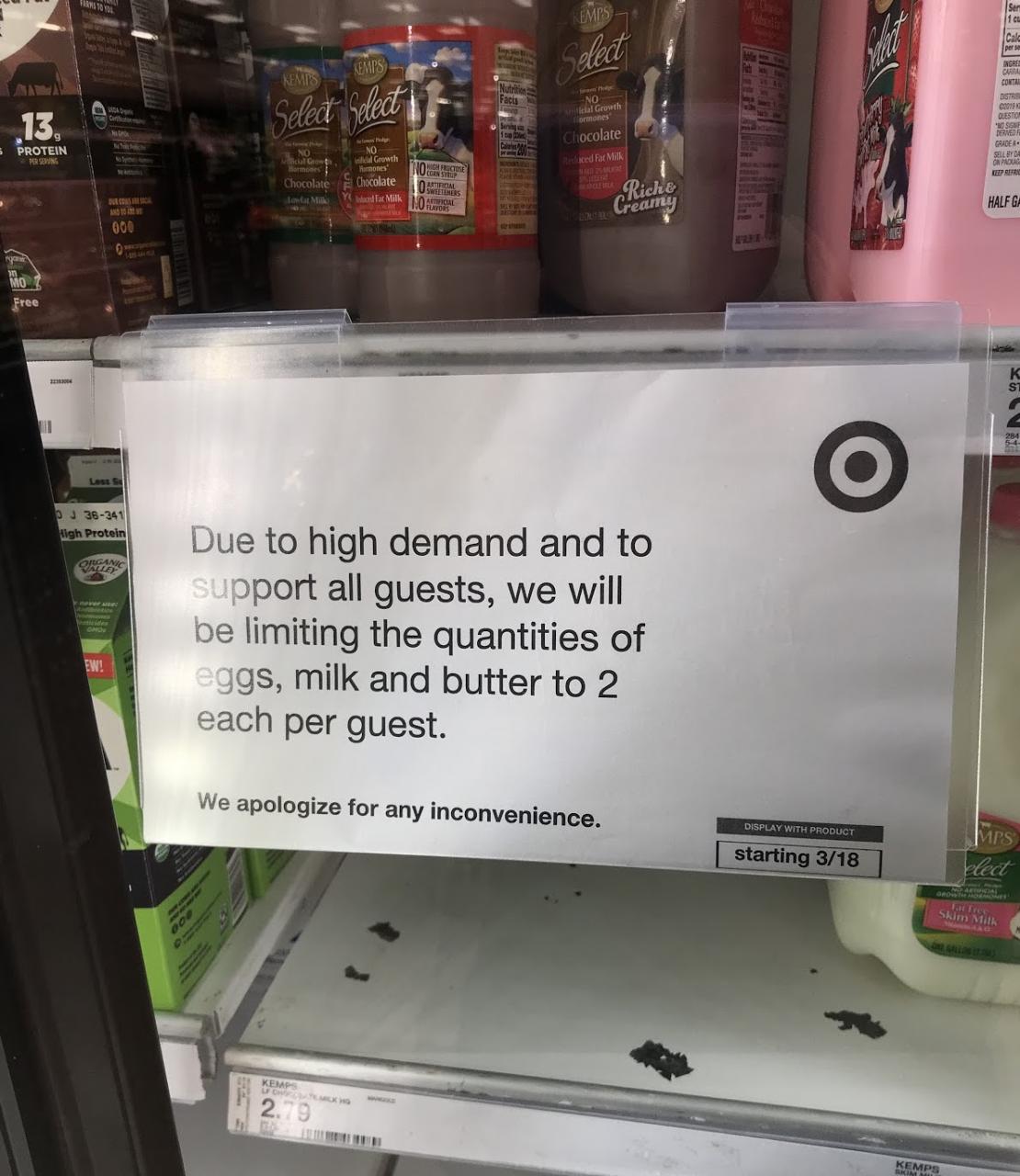