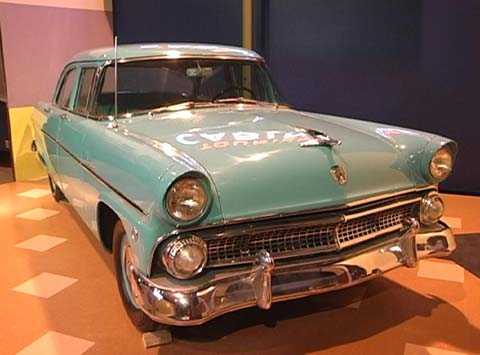 Three-dimensional objects in the Society's collection come in all shapes and sizes. While most are small enough to display in a glass case, others take up more room. Such is the case with one of my favorites, a 1955 Ford Customline Sedan. The car is one of our most recent acquisitions, and currently is on display in the Minnesota's Greatest Generation exhibit. The Ford has a special use history, having belonged to three generations of a single family. While that story is told in one of our podcasts, in this space I'd like to focus on the car itself.

The Customline series was Ford's mid-line entry. It was fancier than the spartan Mainline, but not as well-equipped as the Fairlane model. Ford built more than 235,000 four door (or "Fordor," to use the company's clever spelling) Customlines in 1955, making it one of the most popular models. The 1955 cars are distinguished by their wrap-around windshields and "egg crate" grilles, as well as their optional seat belts and air conditioners - both Ford firsts that year.

This car is somewhat unique among our objects in being so well-documented, beyond the family's own recollections. The car's serial number, A5PG167947, yields all sorts of information once it is decoded. The "A" identifies the engine as a six-cylinder overhead cam with 101 horsepower. The "5" denotes the model year of 1955. The "P" designates the place of production as the Twin Cities Assembly Plant in St. Paul. The "G" identifies the body style, while the numerals indicate the car's consecutive unit number. Other codes reveal the car's body type, trim work, and color - "Mountain Green" in this case.

The sedan is equipped with a three-speed "Fordomatic" automatic transmission, an AM radio (added in the early 1970s but of the appropriate vintage), and Ford's "Magic Air" system, which allowed the cabin to heat up and the windows to defrost much faster - certainly handy in Minnesota. While the car does have seat belts, they are after-market add-ons, and not original Ford components. Other custom features installed by the owners include plastic seat covers, a Goldy Gopher window decal, and a loud klaxon affectionately described as an "oogah" horn.

All in all, it's a pretty special piece. The car was built in Minnesota and driven in Minnesota by the same family for three generations. It relates to transportation, manufacturing, and - in the context in which it is displayed now - post-war consumer culture. And did I mention that it has just 42,300 original miles?

By: admin | Podcasts and Slideshows | May 4, 2009
Collections Curator Matt Anderson presents the story of a 1955 Ford Sedan MHS acquired for the Minnesota's Greatest Generation exhibit. The car was purchased new, and then driven by three generations of the Bergan-Carr family before arriving in our collection. Oral history, family photos, and film of the St. Paul Ford plant add to the story.

Read more about the car's technical specifications in a separate post under "Our Favorite Things."
Comments 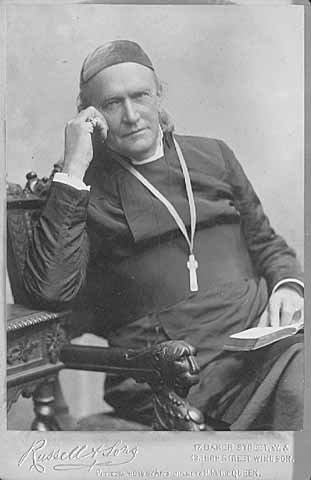 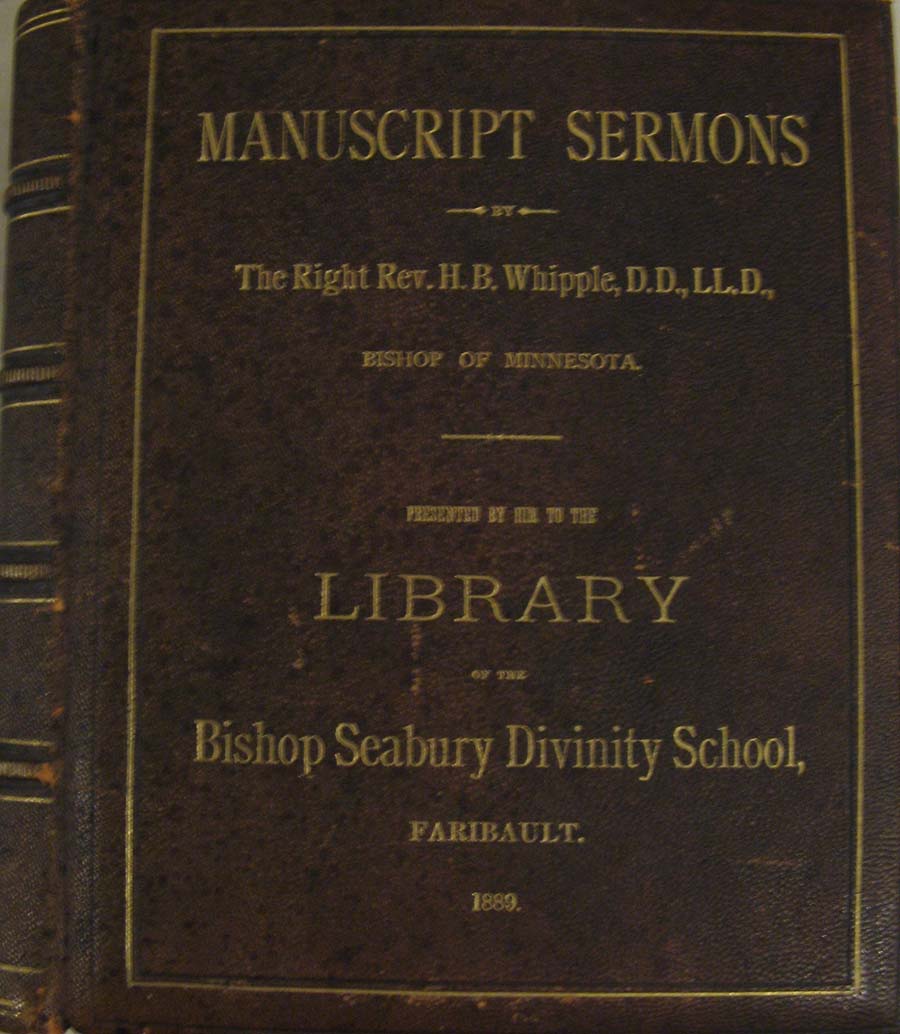 The oratory skills of Minnesota's first Episcopal Bishop, Henry Benjamin Whipple, were highly regarded in the U.S. and abroad.  A recent donation gives readers the opportunity to read selected sermons written by Whipple with quill pen and ink.   This volume provides the opportunity to leaf through many pages of Whipple's flowery hand and experience the energizing tone of this man's oratory.

With the acquisition of this volume the Society now holds a fine complement to the official Episcopal Diocese of Minnesota records and the Henry B. Whipple papers.  This custom bound volume contains original manuscript versions of sermons given by Whipple between 1888 and 1889.  It was assembled by him and presented to the Library of the Bishop Seabury Divinity School, Faribault, 1889.  The sermons illustrate church politics as well as illuminate Whipple's historical knowledge, biblical scholarship, and his regard for people of many cultures and national origins.

In this role as Episcopal Bishop of Minnesota, Whipple was required to attend annual church conventions across the United States. An avid traveler, Whipple frequented his home state of New York and made regular visits to Washington, D. C., for meetings relating to Indian policies.  After 1862, Henry Whipple gained notoriety as an advocate for American Indians. As an advisor to four presidents over 40 years, Whipple's opinion carried great weight in the eastern states-often more so than in Minnesota. 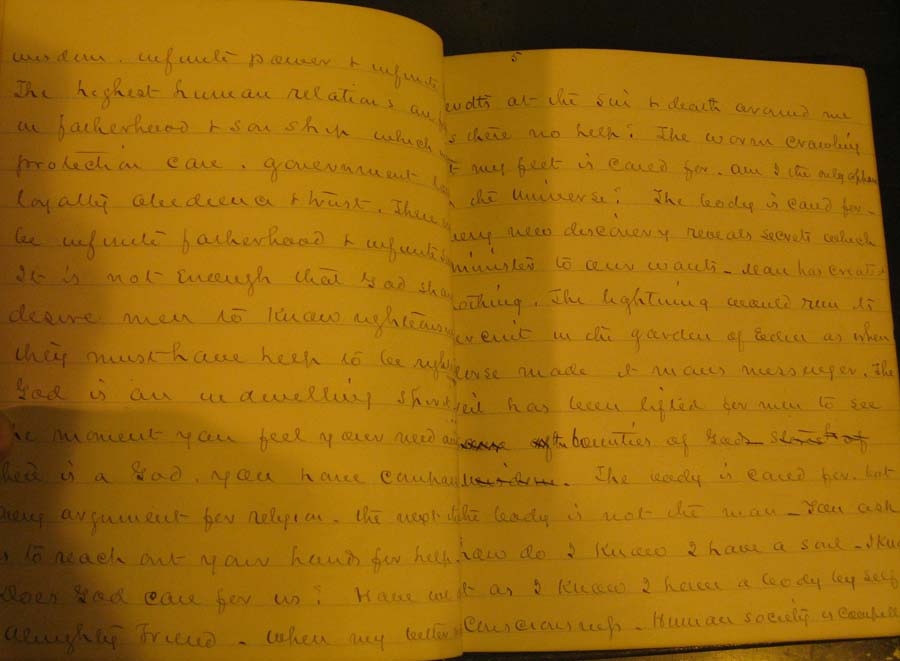 This past winter I organized the exhibition Minnesota Prints and Printmakers, 1900-1945 which is on view at the James J. Hill House through the spring and summer of 2009. The exhibition of over 50 prints by 42 artists explores an exciting chapter in the history of art making in Minnesota. This period witnessed a revival of the centuries old etching process followed by the introduction of New Deal era innovations in color lithography and serigraphy. Minnesota Prints and Printmakers celebrates the genius of the artists working between 1900 and 1945.

It was a joy to review many of the society’s collection of more than 800 prints from this time period. One subject that emerged as a favorite were etchings and engravings of Duluth and the North Shore. Just as it does today, the shores of Lake Superior attracted artists in the first half of the 20th century. Included are five of my favorite images that are in the exhibition.

"If you put a banker, a lawyer and a capitalist in a barrel and roll it down a hill, no matter where it stops there will always be a son-of-a-bitch on top."    Saying from the Farmer's Movement 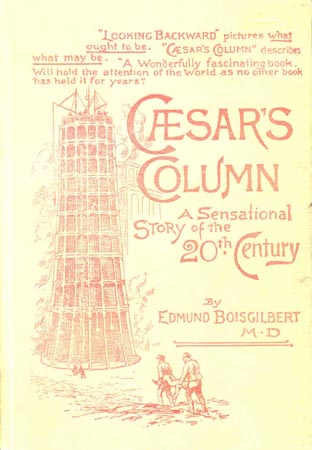 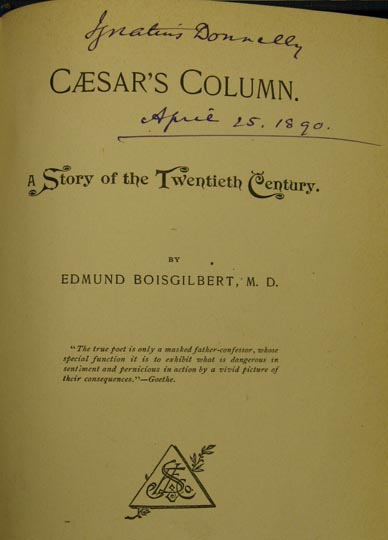 An article in the New York Times this week suggested that, given the bad economy [there I go again], and the pitchfork and torch level of anger to lavish bonuses paid to those who may have been responsible for it, we may be looking at resurgent political populism. If the Times pundits are correct we should hear a variation of the above quote emanating from the halls of congress soon. For further inspiration, I suggest they look to Minnesota history and literature, especially one of Minnesota's best books...

I know you are familiar with Edward Bellamy's 1890 utopian novel, Looking Backward. It was a bestseller at a time when the public was hungry to hear that all the social and economic strife would be amicably resolved and a just society would result. An alternative dystopian view came from Minnesota's voice of the people, Ignatius Donnelly. Donnelly was a key figure in the Greenback Party, the Farmer's Alliance Party, and the People's Party. In his first novel, Caesar's Column, he explored what would happen if the combined nineteenth century trends of corruption and concentration of wealth in the hands of a powerful few continued unabated until 1988. In other words, what would happen if his reform movements failed? The populists answer was that this would lead to barbarism and an unprecedented bloody revolution in America.

Two years after its publication Donnelly penned the preamble to the People's Party platform and it read just like Caesar's Column. "From the same prolific womb of governmental injustice we breed two great classes - paupers and millionaires... A vast conspiracy against mankind has been organized on two continents and is taking possession of the world. If not met and overthrown at once it forebodes terrible social convulsions, the destruction of civilization, or the establishment of an absolute despotism."

Yes, the novel is melodramatic, especially to the modern reader's ear, but contemporary readers were not bothered by the tone. Word of mouth created a publishing sensation. The first printing of two hundred copies was published under Donnelly's pseudonym and sold out quickly. By the end of 1890 the book was selling 1,000 copies a week. By the end of the century it had sold almost a quarter of a million copies in the US and twice that many in Europe. Donnelly's dystopia was as popular as Bellamy's utopia. Harvard reprinted the book in 1960 and it is still in print today.

Martin Ridge's biography of this renaissance man of Minnesota, Ignatius Donnelly: Portrait of a Politician, was awarded "Best Book" by the American Historical Association when it was published. The MHS has kept the book in print.
Comments

The Delisle Globe is a spectacular and important recent addition to our collection and is currently on view in the Minnesota on the Map exhibit.

We can now offer you the chance to move and manipulate this amazing and fragile 1765 French globe yourself in ways one never could in real life. Take your mouse, click and move the globe around. See it from different viewpoints, zoom in and visit the Northwest Passage, Lake Superior, or the mysterious cities in the lower Mississippi Valley.

More on the globe

Let us know what you think!

Be aware Quicktime is required to view the file and that at 53MB the Quicktime VR file will take time to load before the image can be manipulated.

Our thanks for making this possible go to John Soderberg, managing director at the University of Minnesota’s Evolutionary Anthropology Laboratory, and Michele Stillinger.

Minnesota Prints and Printmakers, 1900-1945, an exhibition of over 50 prints by 42 artists currently on view at the James J. Hill House, explores an exciting chapter in the history of art making in Minnesota. Reflecting national trends, printmaking in Minnesota before 1945 was dominated by two distinct styles. This period witnessed a revival of the centuries old etching process followed by the introduction of New Deal era innovations in color lithography and serigraphy. In his book of the same title, author Bob Crump ably demonstrates that this period in Minnesota's art history was as lively as it was productive. Minnesota Prints and Printmakers celebrates the genius of the artists working between 1900 and 1945.

The Society recently acquired a pair of interesting items associated with the Navy frigate USS Minnesota. The vessel was launched in 1855 and served as flagship of the Union's Atlantic Blockading Squadron during the Civil War. The Minnesota is best remembered for her participation in the 1862 Battle of Hampton Roads, the famed clash between the ironclads Monitor and Virginia.

The acquired items include a photograph of the Minnesota, and a relic made from her hull. The photo, taken around 1898, shows the venerable frigate in her last assignment as an apparent barracks ship with the Massachusetts Naval Militia. The relic is a small fragment of the vessel's oak hull, with a silver plaque proclaiming its origin. The fragment was made by Thomas Buttler & Company of Boston, the firm that scrapped the ship in 1901.

The photo and relic complement two other pieces already in the Society's collection: the Minnesota's wheel and bell. Together, they preserve the memory of the first Navy ship named for the state (er, territory) and a witness to one of the most remarkable naval battles in history.