Tracey is leading the database of Minnesota photographers with a team of volunteers. The purpose of the project is to allow MNHS to have a collection of Minnesota photographers and to help benefit people such as researchers who are interested in photographers. Bruce White has been working on this project since 2008. He has predicted that this project will take 12 years to complete. Valerie Woelfel is an archaeologist volunteering on this project for a year and a half. As an archaeologist, Valerie has numerous research skills and database resources to efficiently work on the project. Lacy Siestema is a researcher who has been volunteering for over a year. The investigative project has allowed Lacy to become more efficient at researching and using the sources available. With the help of the volunteers, the project is 55% completed.

Joyce worked for the State of Minnesota as a job analyst and is now assisting Pamela Ostrom in Human Resources as a job classification specialist. She has used her skills to help managers and supervisors write out job descriptions and position in the correct language to match their needs along with reviewing the position at the correct salary range. Joyce is extremely knowledgeable and her assistance makes things easier, faster, and more comprehensive. 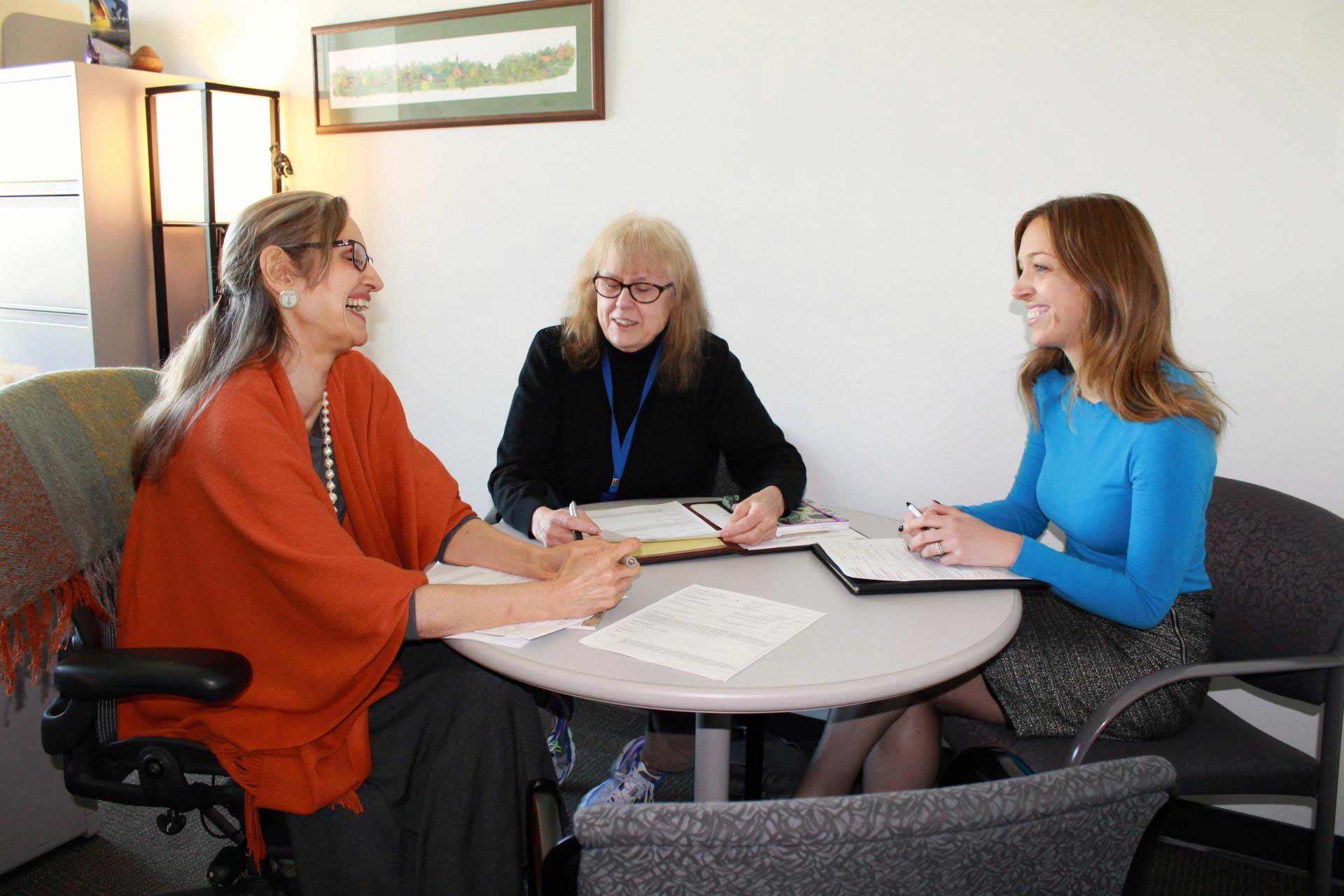 Michael is the Database Analyst and Technician for the tax credit program under the supervision of Barbara Howard. He has brought in troubleshooting and database skills to this project. During the time that Michael has been volunteering for the Historical Center, he has cleaned through 720 applications, making the data consistent and with continuity. The Historic Preservation Department is hoping to redesign the database. Without Michael’s expertise and help, designing the new database with a high and clean profile would be difficult.

Diana has 45 years of math experience teaching in junior high schools, high schools, and community colleges. She has been a key player in the Lumberjack Math instructional kit volunteering for Heidi Kloempken in the Museum Education and Lifelong Learning department. The Lumberjack Math instructional kit it a fun and unique way to introduce math and history for students grades 4 - 8. She has checked the math problems along with answers and reworded to make sure that the language of the problems are easy to understand for non-native English speakers. Not only does she check the word problems, Diana also offered great ideas and clarifications on the tool kit. 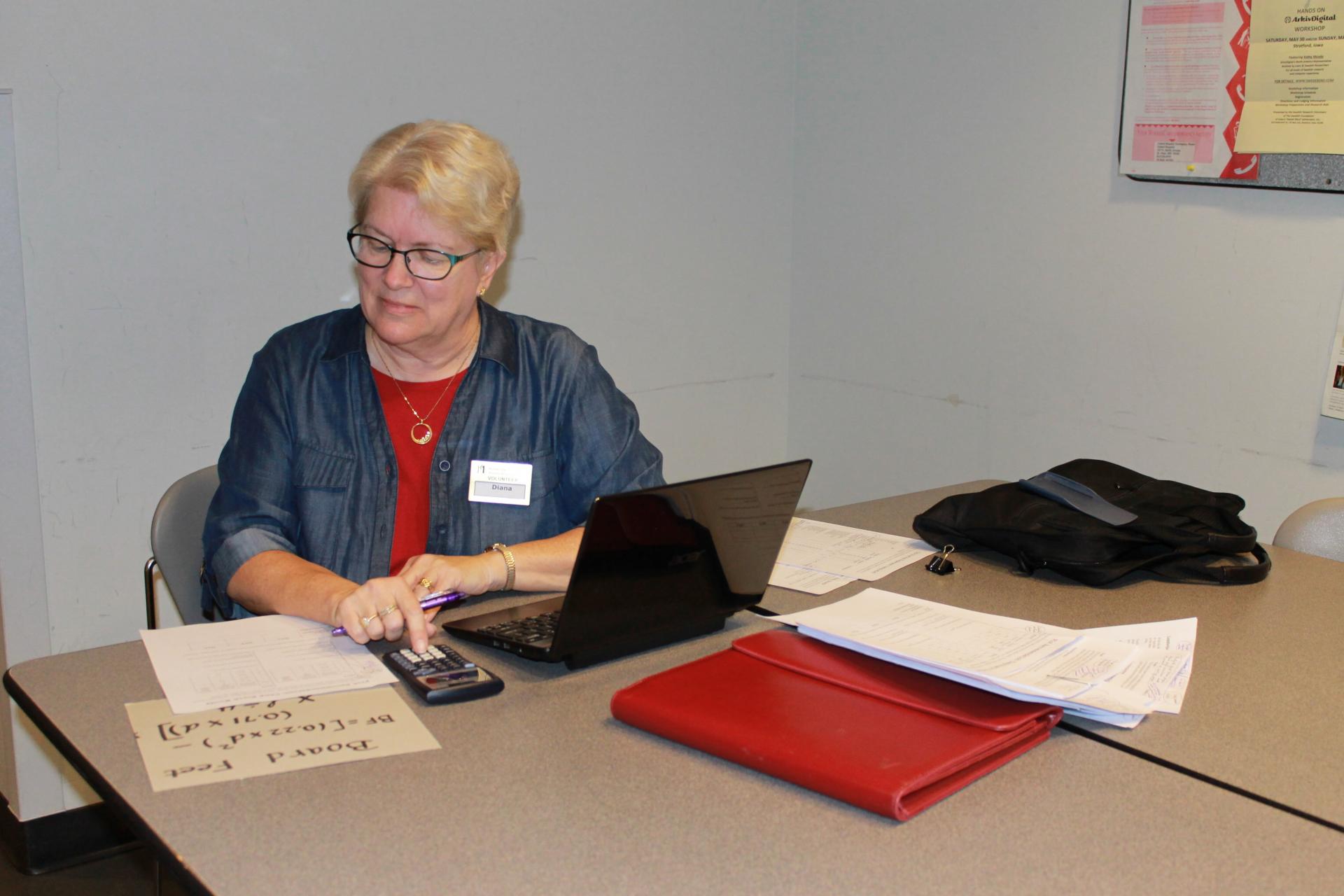 While the records are not a new acquisition to the State Archives, a sizable number (14 boxes) of Adjutant General records, with significant content and value, received enhanced arrangement and description. They will be very useful for research as the World War I centennial is observed. State Archives volunteer Mary spent more than eighteen months reviewing, arranging, describing and re­housing these Adjutant General records. Most of the records are from the World War I era, but there are many records dating from the 1880s. The records include Home Guard and Naval Militia enlistment papers, administrative files of the Adjutant General’s office, selected records (e.g., rosters, reports, orders, correspondence) of Minnesota National Guard units, files concerning National Guard encampments and facilities (including Camp Lakeview in Lake City), District 3 Draft Board records, and court martial files.

State Archives volunteer Charles did data entry into a spreadsheet for Transportation Department/Bridge Division bridge plans (dated circa 1895­-1973) for approximately 996 bridges selected by Transportation Department staff as a representative sample of various bridge types used in the state as well as structures of historical significance in terms of engineering or location. Besides bridge type, engineering design, and location/crossing, plans were selected for bridges listed in, or eligible for, the National Register of Historical Places, or for which a Historic American Engineering Records (HAER) report was completed.

A set of Adjutant General/National Guard ordnance and supplies reports (dated 1866-1915) preserved in the State Archives were re-processed by State Archives volunteer Debbie. Many of the records were tri-folded, so they were unfolded and re-housed, with a new inventory accomplished. The records include reports, returns, inventories, and correspondence documenting ordnance, clothing, equipment, quartermaster supplies, and other property supplied by the state to the various Minnesota militia and guard units during period between the end of the Civil War and the United States’ entry into World War I.

Submitted by Charles Rodgers on 5/5/15

Luke worked with Ryan Barland, Oral History and transcribed 3 interviews that have sat in our backlog for about 30 years. One interview is with a WWI African American veteran, and the other two are interviews with Dakota elders. The transcripts Luke did will make these interviews accessible to the general public and be a great resource for researchers. Since there is no budget to transcribe these old interviews without volunteer help they would have remained unused.

Jack completed a Return on Volunteer Investment report. He interviewed 24 staff, analyzed the data and came up a report that will be shared with staff. This enables us to learn what it takes to work with volunteers, the resources needed and how we can improve our programs.

The Biographical Directory of the United States Congress (http://bioguide.congress.gov/biosearch/biosearch.asp) is one of the most authoritative sources for biographical sketches of current and former members of the United States Congress. Many of the sketches contain references to collections of papers and records that congressional members have created and that are in public archives. As part of her volunteer work for the manuscripts unit of the Collections Department, Lydia reviewed the entries in this guide for all past and present Minnesota members of Congress. She updated entries for 26 Minnesota representatives and 14 Minnesota senators. The historical offices of both the U.S. House of Representatives and the U.S. Senate sent communications thanking her for the submissions. We expect that these updated references will increase use of those manuscript collections by scholars using our Gale Family Library.