Minnesota's Greatest Generation will be closed July 5–29 as we update the lighting in the museum to be more safe and efficient!

Visit the 20th century through the eyes of Minnesota’s Greatest Generation. True stories from this remarkable group of people will take you through each era and leave you inspired.

Members of Minnesota’s Greatest Generation are people we know: they are our grandparents, our parents, and our next-door neighbors. They grew up during the Depression, came of age during World War II, and participated in the post-war boom, creating a lasting legacy that has shaped all of us who have come after. These defining events have resulted in a variety of rich and diverse life stories: tragic to heroic, dramatic to ordinary.

This landmark exhibit preserves their legacy and makes it accessible to all generations, with a vast array of artifacts, displays, hands-on elements and multimedia interpretive techniques that reveal the experiences of Minnesota's Greatest Generation. Tracing the entire life arc of the generation — from birth to legacy — the exhibit beckons visitors to explore the generation’s accomplishments, sacrifices, disappointments, challenges, and enduring legacy.

Through recorded interviews, archival footage, film, and audio, members of the generation guide visitors through their childhood and adolescence in the 1930s, to their years as young adults during the war and post-war era. 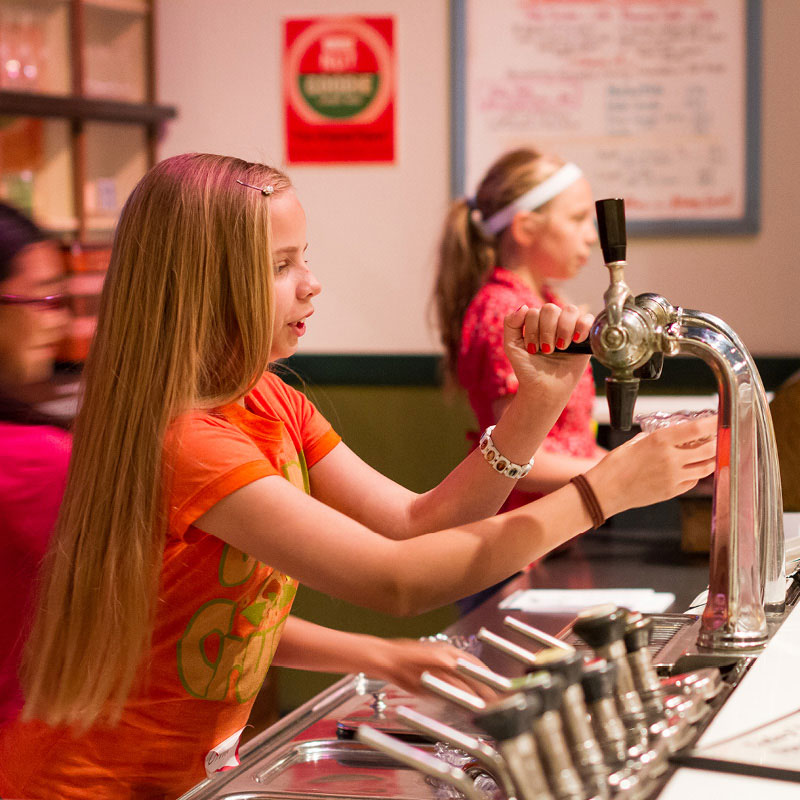 Youths during the Depression, this generation found ways to have fun despite the hardship.

Take a trip to the movies in a 1930s movie theater, where clips from popular films of the time accompany stories about what made movie-going so important to this generation’s formative years. Examine artifacts and stories from the Civilian Conservation Corps, a New Deal program that put people back to work again. Admire a homemade "car" from the 1938 St. Paul Soap Box Derby.

Take a seat at a classic soda fountain from the 1930s, play a vintage pinball machine, and listen to the jukebox to hear stories of carefree teenage lives interrupted by the events of December 7, 1941. Then experience the transition to war time at the "home front," where rationing and recycling for the war effort became the norm. 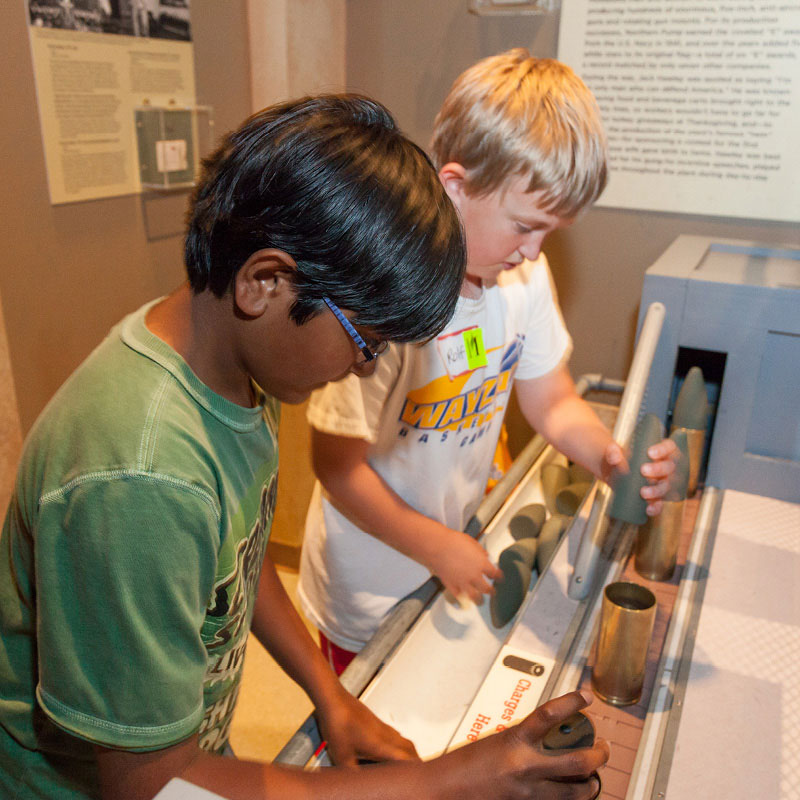 Members of the Greatest Generation were young adults as the shadow of WWII spread throughout the nation, and those in Minnesota contributed to the war effort in whatever ways they could.

Experience the dedication and determination of life on the home front by packing ammunition shells on a recreated factory assembly line based on the Twin Cities Ordnance Plant. See an M8 armored vehicle produced during the war by workers at the St. Paul Ford plant. Experience a harrowing D-Day flight through a realistic multimedia presentation in the fuselage of an actual war-era C-47 troop transport aircraft. The voices of Minnesota men and women who experienced the war on the front lines share their compelling stories, and see the objects that these soldiers took with them from the battlefield.

Stories and objects from the Military Intelligence Service Language School at Fort Snelling reveal how Japanese-American soldiers trained for work in wartime intelligence. And see how conscientious objectors could still help their nation during wartime by volunteering for the University of Minnesota’s “semi-starvation” study examining the effects of malnutrition. 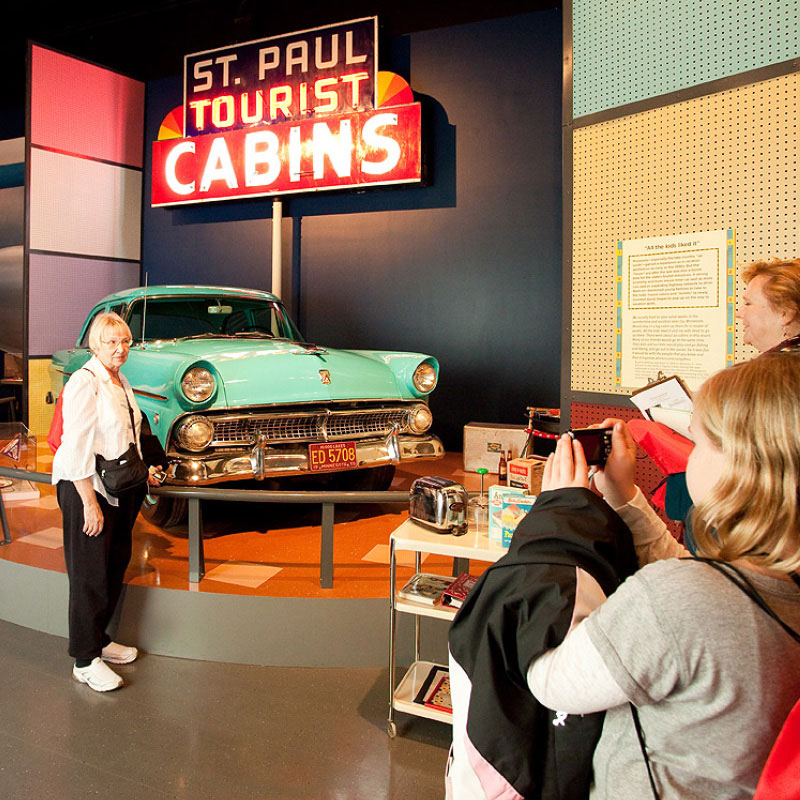 In the years following the war, the nation experienced a boom in prosperity, industry — and of course, babies.

Step into a 1950s television showroom with clips from popular shows of TV’s pioneer days and the KSTP archives housed at the Minnesota Historical Society, as well as an interactive area where kids can test TV tubes to see if they are faulty. See the iconic “St. Paul Tourist Cabins” neon sign, and a 1955 Ford nicknamed "the Bluebird" by its original owners in Clinton, Minnesota.

A 1950s hospital nursery returns visitors to the wonders of prosperity and suburbia, while a dry-cleaning shop with a moving rack of clothes highlights the activities of this "generation of joiners." A 1960s airport setting recalls the global reach and work of men and women of this generation from Washington, D.C., to the State Department and the United Nations. 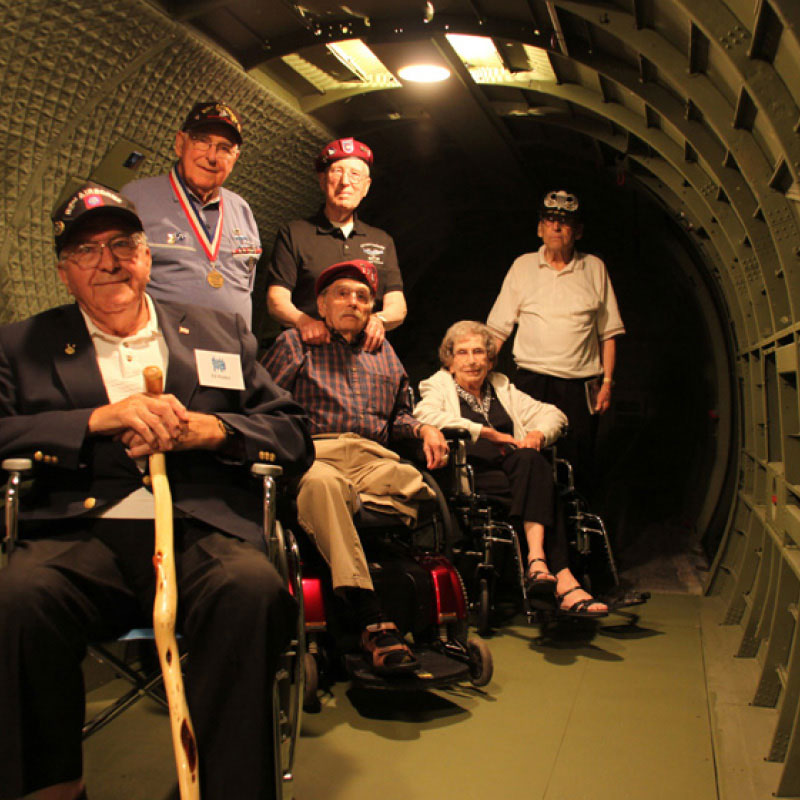 A multimedia show tops off the experience by reminding visitors of the life arc and profoundly important legacy of this Greatest Generation. This is the story of a generation that endured great hardship, displayed courage, and seized the opportunity to shape our modern nation and world.

Support for this exhibit provided by Kare 11, WCCO Radio and Pearsons.