Charlotte was born February 26, 1877, in the Dayton’s Bluff farmhouse on the east side of St. Paul, where the family was living until their new Ninth and Canada house was completed.

Charlotte attended Visitation Academy with her sisters, and went with them in the fall of 1890 to the Misses Ely’s School in Brooklyn, graduating in spring 1893. She studied the violin as a child, and was considered more outgoing and gregarious than her sisters. She enjoyed playing sports, and many of the early round photographs show Charlotte entertaining friends at the Hill House.

In the 1890s Charlotte kept a sketchbook of fashion designs (now in the Minnesota Historical Society Collections) that were sometimes used to make clothing for the Hill daughters.

In 1901 Charlotte married George Theron Slade, who worked with the Erie Railroad. George was a Yale classmate of James Norman and Louis Hill. Theirs was the first of four family weddings at the Hill House. They were married in the Drawing Room with a wedding procession down the main staircase and hallway. Chrysanthemums from the greenhouses were used in the decorations.

In 1903 James Hill persuaded George to take a position with the Great Northern, and he later became an executive with the Northern Pacific Railway.

The Slades lived in New York City after their marriage while George was still working for the Erie Railroad, but they later moved to St. Paul, living first at 251 Summit and later at 435 Summit Avenue, directly across Summit Avenue from the University Club but since razed. Their country home and farm was in Dellwood, Minnesota.

Like her mother and sisters, Charlotte was active in World War I relief work and Catholic charity institutions in St. Paul. Charlotte helped provide clothing and food for both the troops and European nations affected by the war, and in the promotion and sale of Liberty Bonds to finance the effort. During the war, George Slade served in the American Expeditionary Force in France as director of transportation.

George and Charlotte moved back to New York City in 1922, where Charlotte died on December 14, 1923. Though maintaining the Dellwood farm, George Slade remained a New York resident. He died in 1941.

In her will, Charlotte left funds to Saint Mary’s Hospital in Rochester and for the building of a new Catholic church in White Bear Lake. The Church of Saint Mary of the Lake was later built with her gift and contributions from her sisters, Rachel and Gertrude, and dedicated to the memory of their mother. It is an exact replica of the old Saint Mary’s Church in Lowertown. Charlotte also funded construction of the altar and the baldachin at the Cathedral of Saint Paul. Its dedicatory panel reads:

In memory of a beloved father, James Jerome Hill, whose goodness was displayed prudently and philanthropically, Charlotte Hill Slade, a most dutiful daughter, lovingly donates this high altar of the temple cathedral recently erected by Archbishop John Ireland, on which the names of her natural parent and of her father in Christ are conjoined. 1923.

In 1926, after her mother’s death, Georgiana Slade donated a 17th-century hammered silver crucifix and six large candlesticks for use on the main altar in the Cathedral. 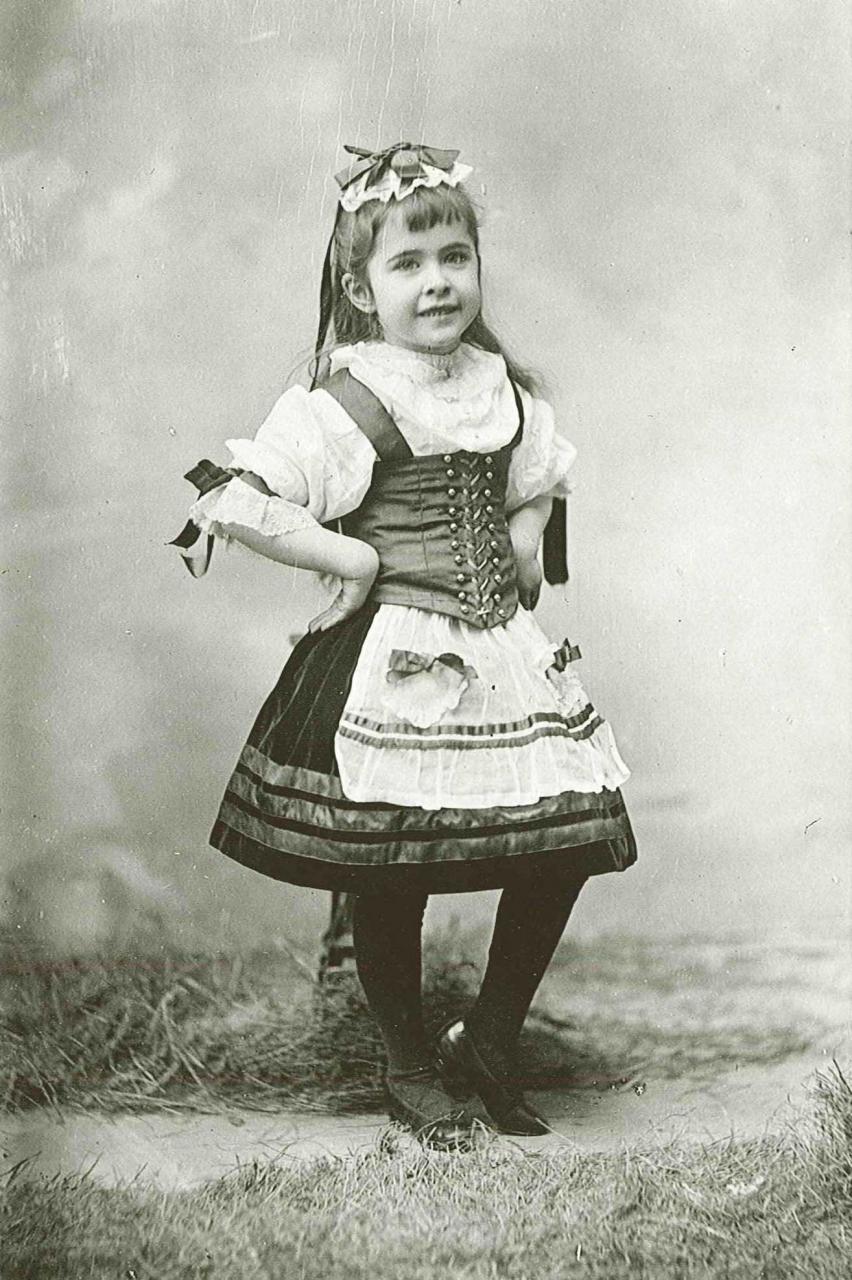 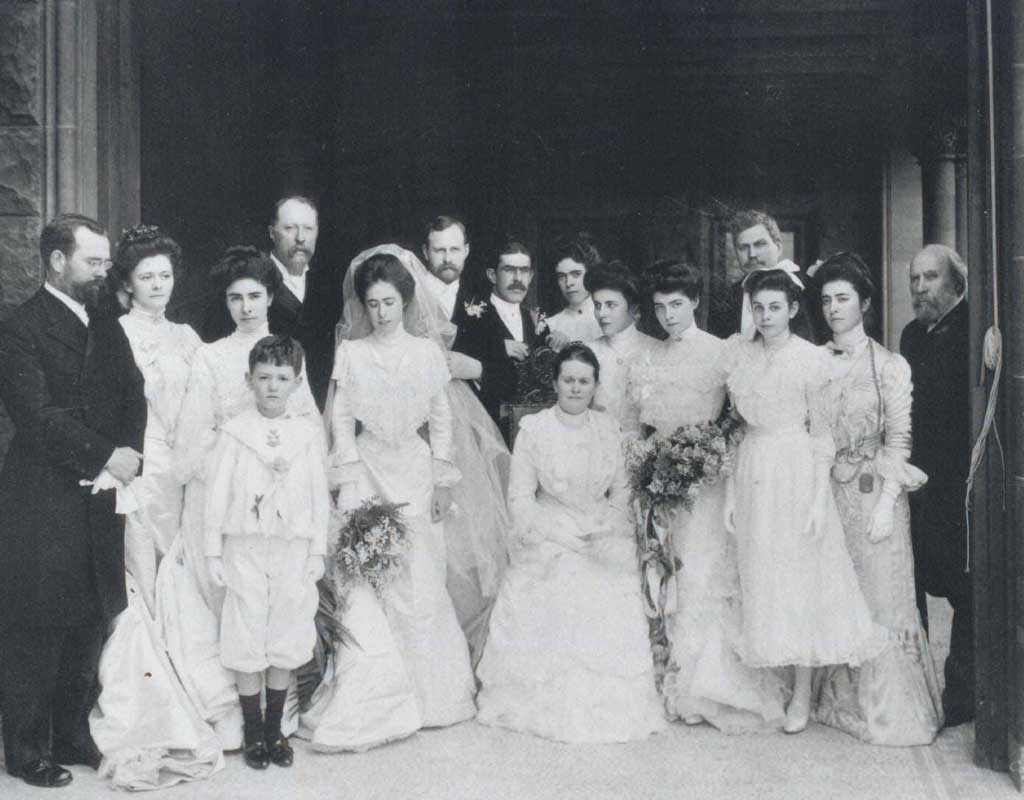 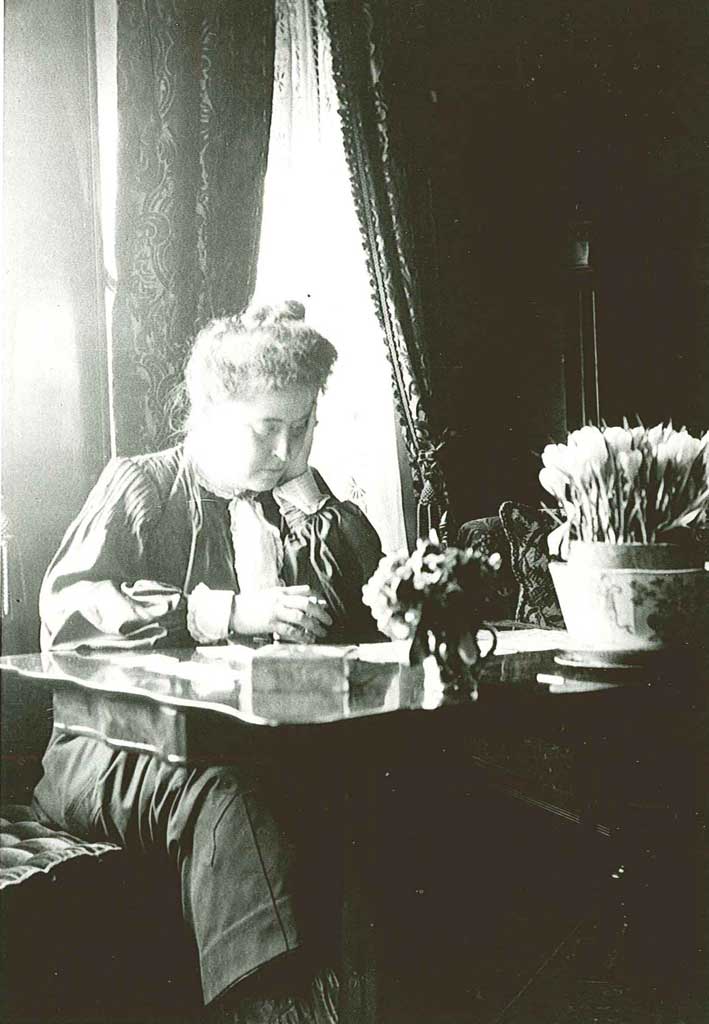 Charlotte in the Hill House library, 1905