A symbol of success, personal taste, and family life, the James J. Hill House recalls the powerful era of the Northwest’s “Empire Builder.”

The Boston firm of Peabody, Stearns, and Furber, which was known for its impressive mansions in Newport, Rhode Island, designed a massive Richardsonian Romanesque style mansion, then very much in fashion. The final cost totaled $931,275.01 including construction, furnishings, and landscaping for the three-acre estate.

Hill oversaw the planning, construction, and furnishing of the house as if it were a new branch of the railroad. He rejected stained-glass window designs by Tiffany and Company, saying they were "anything but what I want," and even replaced the architects when they ignored his orders to the stonecutters. He instructed his Boston interior design firm Irving and Casson to finish the project. Their work included a large number of custom furniture pieces on the first and second floors. 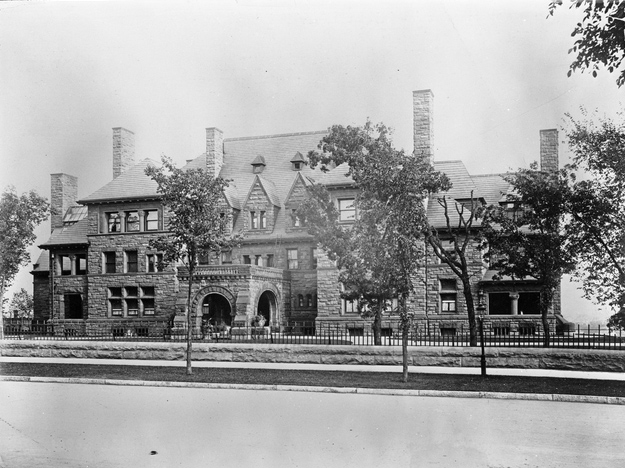 When it was completed in 1891, the mansion was the largest and most expensive home in Minnesota. The house contained:

Master carver John Kirchmayer, a Bavarian immigrant, was paid $1 per hour for his intricate carving of the home's grand staircase. General laborers earned $1.75 per day.

The huge basement of the Hill House contained servants' quarters, a kitchen featuring a dumbwaiter (to bring food to the dining room above it), laundry, boiler room, and hand-pumped bellows for the 1,006-pipe organ in the skylit gallery above. The floor is inlaid marble.

The two-story art gallery was built for Hill's magnificent art collection, consisting mainly of Barbizon School of mid-19th century landscape painters. Retractable iron grilles on the windows and doors provided security for the collection and the family's other valuable possessions. Much of the art collection was later given to the Minneapolis Institute of Art, which Hill helped found in 1915.

The fourth floor features a stage in a room that could seat 200 people, a grand piano, and gymnastic equipment. The Hill children used the room as a playroom.

Life at the mansion

The home served as the center for the public and private lives of the Hill family for the next 30 years. Children grew up in the house, and four daughters had their weddings in the large drawing room. Newlyweds often lived in the enormous house until their own homes were completed, five of which were close by on Summit Avenue. In later years the house came alive with visits by grandchildren.

Mary T. Hill kept a watchful eye over the household, including the large domestic staff of 10-12 servants. She hired maids and cooks, inspected the kitchens, and served as hostess at countless dinners and receptions. "I feel it is necessary to know just where everything is and how it is," she commented in her diary.

After a visit by President William McKinley in 1899, she merely noted, "The evening passed off most pleasantly and quietly."

Mrs. Hill maintained the house after her husband’s death in 1916 until her own death five years later.

Life after the family

In 1925, family members purchased the mansion from the estate and presented it to the Catholic Archdiocese of St. Paul. For the next half-century, the structure served as an office building, school, and residence for the church.

The Minnesota Historical Society acquired the house in 1978. It was recognized as a National Historic Landmark in 1961.

Articles about items in the Hill House

In the online shop